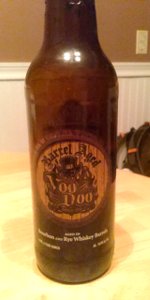 22oz bomber found for a price lower than I think it should have been, considering this is presumably a BBA Imperial stout. Never heard of Left Coast Brewing before and my first impression is they mis-priced it. At Ralph's, not some low-rent discount place that sells junk beer. It's my lucky day, right? Name on the bottle says "Barrel-aged Voo-Doo Imperial Stout -- Aged In Bourbon and Rye Whiskey Barrels" and the only match I see here on BA is a retired beer. Is this really from late 2013? Stouts apparently generally age well, so here goes.

No visible date on the bottle. Has a wax cover over the cap. Once I get that off with a sharp device, pours almost full black with a very thin tan head. Light comes through brown at the edges. Lacing is inconsequential. Aroma is of deep chocolate, slight dark fruit. Roasted malt. Good... But --- the taste is less impressive, being a sour malt and bitter coffee, with a hoppy bitter tinge that seems to be fighting any cocoa from coming through. No real roastiness, not even any burnt malt. Fullness of a chewy stout is simply not here. I get ashy cherries and a bad-quality bourbon thing going on; it's not transcending. And there's an odd, slight hard water taste that's throwing the whole thing off a bit. Oxidation?

This bottle may have gone through something it shouldn't have, heat or sitting on the back deck in a warehouse for a year or more, a bad bottle -- mellow rye notes are there but nothing to write home about. Finish is resiny and a bit boozy. Generally hides the booze, no heat until the finish.

As drink warms aroma is more bourbony. Taste also gestures (barely) towards bourbon as it warms -- I think that is what they're betting on here, but for my tastes there's not enough malt or dark fruit or really anything to make it all play nice together, it's just not working for me.

I'd maybe retry this with a guaranteed fresher bottle just to give it a fair shot, but there's no way I'll buy this again. There are better go-to RIS's out there dated properly and while it's only $7.00 why waste on this?

I'm giving them the benefit of the doubt by not doing "2"s all across the board. Take my rating here with a grain of salt.