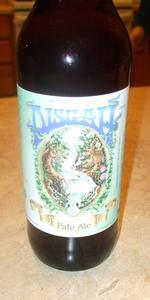 Beer poured light orange with a beautiful white head that is leaving some lacing and has great hang time.

Nose is nice, pale and caramel malts are perfumed with citrus hops.

Taste follows the nose with the classic bready pale and caramel malt base that is nicely hopped with orange and grapefruit. Finishes a touch bitter; 6/10 on my scale.

Mouthfeel is medium bodied and both smooth and refreshing.

Overall a classic representation of the APA style, nicely done!

Reviewed by haines710 from Delaware

Reviewed by NiceTaps from New Jersey

Pours a murky golden brown color with a 1f white cap that holds up and leaves moderate lacing.

Mostly caramel malt flavor. Hops fight for a seat at the flavor table, some light citrus.

A pale ale as meant to be. I’d order it again.

Reviewed by Buckeye55 from North Carolina

Reviewed by Jgm0930 from North Carolina

Rated by bubseymour from Maryland

Reviewed by kdoodah from Texas

Reviewed by UPMD_Bill from Maryland

Rated by HopsForBrains from North Carolina

Reviewed by SmokySignals from North Carolina

Still went into it with high expectations..what with all the "look at me I'm green/organic" hype.

The aroma - has a "rounded square " hit of undefinable tartness, then when the head is gone down to a thin surface coat, there's a hint of malty nose, somewhere out there....unimpressed so far....no lacing to speak of...kind of meh.

Taste, well, it's like the nose - a little flash of bursty tartness, then a hint of malty, then gone with the wind into a mild medium bitterness.......so I waited a few minutes to warm it up for the 2nd quarter (my fridge must be near 35F) ..anyway....it gets a little fuller, maltier and more enjoyable as it sits with you. Still it seems a little fizzy and yet somehow lifeless.. It definitely "pales" in comparison to my current favorite APA, a certain St. Terese's, by Highland....

By reaching the right temp./2nd half it gets maltier, richer and more aromatic in every sense, while slightly less bitter and reminding me of a Red Hook ESB or old school EPA....? My brain is confused again.

So, I cracked open a St. Terese, spent 30 min. comparing on that, and came back to pour another can of Pisgah while reading up on it..and, from looking at the hops used, I see what they must be going for...not the US trendy hopped up modern Pale, but a more old school bitter hop (Nugget, Chinook) blend like an English might have...and so my opinion of it changed for the better. Would give higher mark for a better looking brew, more can info, and a pro logo) regarding their approach. Since APA's can be all over the place, depending on any number of things they can do, it would help to know what to expect in that regard
.
Try one if you haven't, as it is a quality product no doubt. Most folks like it more than I do. I won't likely buy any more of it, unless the other 3 change my mind....it's possible.

Rated by RobinsonRiverRally from North Carolina