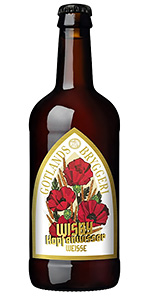 Reviewed by Wer34truh from Minnesota

Smells of floral hops and general spring flowers. Some yeast as well but otherwise there aren't that many traditional hefe-notes in this.

Taste is restrained, with a light almost sour grassy taste dominating. Mouthfeel is light, and not sufficiently carbonated. Dissapointed by this.