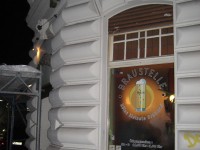 Braustelle is an institution in Cologne and even on a national level they were one of the first places in Germany to brew what would later be known as "craft beer" some 17 years ago, when that whole concept was still totally unknown here. Back then they were just a small, independent brewpub that brewed beer creatively and I guess that at the end of the day that's what they still are, even though the craftbeer revolution has finally arrived in Germany and might just have overtaken them a bit by now. It also gained quite a bit of notoriety back in the day for being the only brewery in Cologne to brew Alt beer, which is heavily frowned upon here due to an old rivalry with a neighboring City, Düsseldorf, where Alt is traditionally brewed. They still are one of only two breweries that do so in Cologne to this day.

I can still remember the rosemary beer I had there god knows how many years ago, totally blew me away, it was what first introduced me to a world of beer beyond Kölsch, Pilsner and all that crap. Then I went to London and didn't return for many years, until recently. I dunno, something has changed, but I'm not sure if it's the place or me. Probably me, to be honest. I don't think their beer has necessarily gotten worse, but my expectations have definitely gotten higher. Which is NOT to say that the beer is bad, mind you. It's just not as fantastic as that rosemary beer I had all those years ago, which has a lot to do with nostalgia, obviously. I just feel like the beers they have on rotation have gotten a little hit and miss since then. They're still pretty good, mostly, but nothing has really blown me away of late. It also really needs to be said that off-flavours do happen from time to time.

Their fixed offerings are still as great as they ever were though, especially the "Ehrenfelder" Alt they have on tap, which is one of the finest Alt beers I have ever had. They have 8 beers on tap, 4 of which are fixed and 4 of which rotate every couple of weeks. Their fixed beers are the Helios, a Kölsch that they are not permitted to actually call Kölsch because it's unfiltered, the Ehrenfelder, which is the aforementioned Alt, the Helios-Weizen, a Wheat Beer and the Pink Panther, a Sour infused with hibiscus. They also offer a decent selection of rustic, traditional german food, which is good but overpriced. Many dishes are served with Alt beer sauce and Treberbrot (spent grain bread). For a great snack, try the Obazda with Treberbrot.

When it comes to the location itself, nothing much has changed in all those years, except for the district its in, which has been heavily gentrified. The place has a great, rustic feel to it, with lots of character. The music is inoffensive and the crowd is usually pretty mixed and interesting. Service is top notch, no complaints there at all.

I have been in Germany for about 8 months now, I am from the US. I had been missing hop character in beers. The German Purity law makes it challenging to have beer that stands out. BUT, this brewery is in a nice setting, it is usually pretty busy, and they have delicious beer! I sat at the bar and spoke with the man sitting next to me, turned out her was the master brewer/owner. I told him I liked hoppy beers and he ordered me something, not sure what it was but it was delicious! We then ordered all there beers on tap (they rotate on 4 taps) and tried three of their bottles. I was surprised by how many styles they had available. All good beer!

Went here based on recommendations from others here on BA, it was something different in Germany they actually brew great beer I tried all of their selection at the time unfortunately it wasn't a lot they only had like 4 as the master brewer was on vacation. But I tried the Helios, the Helios wizen the alt and the no hops beer. And they were all memorable. I appreciate the friendliness of the staff in helping me understand the menu. The patrons were also very freindly and picked up conversation with me quite quickly. I do suggest you go here if your ever in Cologne looking for something unique. the food menu is amazing and the quality is still some of the best Ive eaten while on my short trip. and all this for a very reasonable price.

Braustelle is a brewpub in a bustling neighborhood several miles from downtown Cologne. The door is on the corner of the building, and the modest bar, several steps inside, runs diagonally across the room and seats perhaps 12. The rest of the space is taken up by about 15 variously-sized tables. The brewing equipment is in the back of one side and mostly in the basement. One might think that a pub, self- proclaimed as "Cologne's Smallest Brewery", might have one beer, maybe even a good one. But Braustelle had 4 of their own beers on tap, as well as 5 bottled beers of their own to offer. Like an American brewpub they experiment with styles, offering among others a German Porter, a Doppell, Trippel, and a beer that tasted like an English barley wine. Early on a Saturday evening, the place was quite busy with people eating, drinking, and enjoying themselves.