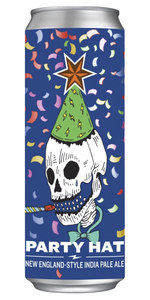 Notes: A GUARANTEED GOOD TIME. That’s what you get when load up on Galaxy, Citra, and Mosaic hops in a hazy IPA with no bitterness. It’s a can’t-miss combination of jaw-dropping juice and aromatics worth raving about. Party on.

Time to give the new Sixpoint hazy IPA a try. As they say on the can, the combination of Galaxy, Citra, and Mosaic is a guaranteed good time... generally. However, I've had my issues with Sixpoint's recent IPAs, so I'm hoping those words don't let me down here. First off, I will mention that my can is about a month old but literally just showed up on shelves here. Not a great look right off the bat, but to make things weirder, this has a six month best-by date given on the bottom. That seems pretty long for a modern IPA. Wonder why they decided to say that. Anyway, on to the beer.

Pours an opaque, chalky looking yellow/light orange color with a nice, voluminous head of pure white foam that streaks and leaves behind nice soapy lace. It stays at about three fingers for a solid five minutes after the pour, which I found impressive, but the retention and surface coverage is great too. Overall, definitely a nice first impression!

The nose felt a little odd to me, kinda, but I found some stuff about it I enjoyed quite a bit. It didn't really seem overtly-dank like I imagined it would right off the bat; instead it has some elements that remind me of Azacca or El Dorado hops... namely a stone fruit undertone and light melon along with the bright and punchy citrus elements. Right away, there's pomelo and grapefruit pith, slight kiwi, some grassiness, passion fruit, and lemon oil. After a few minutes more of allowing it to open up, I started to notice the Mosaic dankness come out to play. Some slight cattiness, guava, and orange pulp as well. Overall, this started meh but got better as it got a bit warmer, weirdly enough.

The flavor profile is a letdown, however. It tastes like an anonymous juice product with absolutely no bitterness or follow-through on the tongue, and the creamy, oat milk-like consistency was off-putting as well. It prickles the palate immediately, but all of the flavors that seem like they should be there just kind of congeal into a mass of homogenized genericness. I just can't get into this whatsoever. It seems like people generally enjoy this beer, but I just... don't. Sixpoint's IPAs seem to be getting to the point for me where I can basically hard-pass them in favor of stuff I find more up-my-alley.

On tap at Dive 106, NYC.
Pours a hazy amber orange color, thick looking and redolent of orange juice concentrate. A moderate head retains for a few minutes.
The aroma hints at bright citrusy characters along with tropical fruit, mainly pineapple, and stone fruit.
Nice juicy and fruity taste that adds tangy bright flavors without it being too sweet. Flavors of tangerine, orange, grapefruit, pineapple and peach. Malt flavor is rather subdued, while a zesty hops flavor adds some spice. Sweet, creamy and smooth flavors of oats add lots to the body and flavor. There is little to no bitterness in the palate, until a light grassy and piny flavor begins to develop in the finish.
Medium bodied, creamy and smooth. The carbonation is right on par.
This was a very tasty and refreshing NEIPA. Excellent job by Sixpoint.

A: Bright orange, super hazy, with a nice creamy head
Smell: Tangerine, apricot, lots of pineapple
Taste: So much pineapple, it really dominates the palate for me. Also getting some orange and a little grapefruit. Clean finish. Zero bitterness
Overall: This is an excellent galaxy hopped ipa. They totally nailed the NE style and delivered the juice. It’s fairly light bodied and airy and I also would have like a little more bitterness but I know I’m probably in the minority on that. Curious as to how this will evolve over the next few weeks

L – 4.25
Pours a hazy, opaque yellow white a pure white, frothy head that falls off quickly to a ring around the edge. Not a ton of lacing to speak of.

S – 4.5
Tropical fruit very strong up front, with a slight dankness on the back end after spinning the glass a few times. Pineapple is what comes straight to mind, a perfectly ripe edition, that has the right mix of fruity sweetness while still maintaining the acidic zing you get with pineapple. The dank is fruity, but a little earthy as well. Warmth brings dimension to both aromas, with the addition of a little peach here and there from the yeast. The aroma becomes danker as it warms, but it’s mild and pleasant, not in the least bit skunky.

T – 4.0
Follows the aroma spot on, in the same order – a burst of tropical fruit, followed by a calm dankness that chases the fruit down the side of your tongue towards the end of the sip. There’s an ever-so-subtle hint of bubblegum, also from the yeast, but it’s much more subdued than it was with Hootie. I think the flavor falls behind the other aspects of the beer – it’s missing something that I can’t quite put my finger on. This may be a me thing – I’ve had a few all-galaxy beers, and most of them are missing the kind of depth that keeps me really interested in exploring where the beer goes.

F – 4.75
Really great smoothness here, while still maintaining the right amount of carbonation and zip to account for the lack of boiled bitterness from the hops. There’s a small amount of resin coating the tongue, but the bubblegum note from the flavor is here, almost like each sip brings with it the oils from a freshly-bitten piece of Dubble Bubble. I appreciate the decidedly medium-to-light body here – it’s eminently drinkable, moreso than many NEIPA offerings that come off a little too thick to have more than one of. I’m going to quibble and say it could perhaps use a little more carbonation to bring it all together.

O – 4.25
I really dig this beer. While I’m missing a depth of flavor, the flavor that is there is fantastic. The mouthfeel and drinkability is sky-high for a beer like this – I’m glad this doesn’t try to be pillowy soft to the point that you feel like brushing your tongue after every sip. The cool part about single hop beers is you can see them evolve and I think this one will be fun to keep up with. I’m also looking forward to sessioning them next weekend, seeing how they stand up after 2 or 3 – perhaps the depth I’m looking for comes with a little more contact and enjoyment.

Another beer from the Sixpoint small batch releases purchased through their app and picked up at brewery on release day. This one is about a week old and I can taste it evolving. For Galaxy lovers , this beer is right in the wheelhouse.

Galaxy beers can taste a bit rough in first couple of days, this one is evolving with the juiciness starting to show. It has haze for daze, I don't have a can of Resin now, but having them side by side would show the contrast, Resin see through like a pane of glass and Party Hat like a glass of orange juice.

Another really good one from SixPoint and one of the first beers from Eric Bachli who used to be the head brewer at Trillium. Sixpoint has been known for a wide variety of beers with a national footprint, while they continue to do this the small batch series beers and the awesome release days at the brewery are adding a whole new dimension to what they do.

Had 2 cans of this. First tasted like a dry hopped sour, must have been bad can. 2nd was much better but still slight letdown. Disappointed about the finish on this. The 1st 3/4 of it is pretty good but then it fades quickly and puts out a malty aftertaste that wasn't expected or desired. I guess that's a byproduct of 0 ibu?