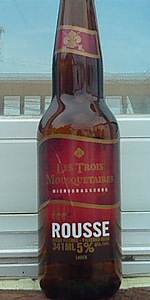 This a great Vienna red lager. The smell is sweet with doppel Bock similarities, just very light. It's taste smooth with salty caramel flavors and a hint of hops. This is a great summer and winter beer in my perspective that had hints of several gendres of beers. One of the most complex lagers around in my perspective.

341ml bottle - this one has a decidedly old-school feel to it.

This beer pours a clear, bright medium bronzed amber colour, with one finger of puffy, loosely foamy, and bubbly tan head, which leaves a bit of low-lying coral reef lace around the glass as it quickly blows off.

It smells of grainy and biscuity caramel malt, a bit of oily nuttiness, subtle dark orchard fruity notes, and some plain earthy, musty, and floral noble hop bitters. The taste is gritty and grainy caramel malt, a touch of biscuity toffee, some apple and pear fruitiness, more generic bar-top nuts, a damp minerality, and some understated leafy, herbal, and floral hoppiness.

The carbonation is adequate in its palate-supporting frothiness, the body a so-so middleweight, and mostly smooth, with just a touch of hop acridity not minding its own manners here. It finishes off-dry, but not by much, as the biscuity character of the malt steers it in that direction.

Overall - well, what we have here is certainly a well-rendered version of the style, nothing complicated, just a nice malty and gently hopped brew. It may look like Rickards Red (including the twist-off cap, I think, looking at the neck), but after that, there's no contest.

Appearance - after pouring, the beer is a red/amber colour with a large size fizzy beige head. The had dissipated very quickly. I can see an average amount of carbonation, and there doesn't seem to be any lacing at all.

Smell - Probably not a good thing, but the first thing notice is vinegar like scent. Checked the freshness date, and we're still good.. Also some toasted malts and hops.

Taste & Mouth - The beer has a lot of carbonation on tongue. Thankfully it tastes better than it smells. I can taste the toasted malts and a caramel sweetness, followed by the bitterness of the hops. Also some notes of pine and a peppery spice mix.

Drink - Once again I am disappointed in the Les Trois Mousquetaires.

Picked up a 12oz bottle in Montreal.

Wonderful copper pour with a finger of off-white head that exhibited good retention and left some streaks of lace on the glass. Malt-forward nose has bread, nut and caramel, but there's also some steely and grassy hops underneath to provide balance.

Pretty neat flavour is a touch hoppier than I expected from the nose, which is usually fine, but in this case I would have preferred it a little more subdued as the malt backing is excellent and the hops really don't deserve to have an equal billing. A burst of caramel, bread, chocolate, earth and mineral combines with a light woodiness to create an impressive flavour. The hops bring a herbal and lightly grassy character with a surprising bite. Medium mouthfeel and carbonation.

As a lager I doubt it will ever get the plaudits that an ale would, but this is nicely made, interesting and highly drinkable. Its not up to the level of their signature series, but neither is it far off. Great stuff, and well worth trying, especially if your a fan of malty lagers.

Aroma subdued but you get spices, sweet bread and some herbs. Mouthfeel is slick with a medium body.

Flavor is defined by a sweet caramel toffee maltiness and some dried fruit and nut tones from yeast byproducts... then that is equally balanced off with a lush herbal-pine hop mixture. Finish gets slightly bitter with a great bready sweet aftertaste.

I think what the brewer was after here was a genuine traditional Vienna style and he got half way there with the choice of malts and yeast but the hops are too prevalent to make this a true Vienna...and that is too bad because I like this beer for its great malt profile however with the higher hop bittering it comes off more like a light Munich dark than a Vienna. A Vienna should be sweeter in the finish with the hops more attenuated...still a good drink by any standard though.

A - Pours a thin layer of bubbly head, which very quickly dissipates and leaves no lacing. Nice clear copper brown with a red hue and a little visible carbonation.

T - Almost a smoked / woody flavour to it. Not overly strong flavour, and finishes a little on the bitter side. The chocolate malts are present and a bit of citrus hops are blended as well. Nicely balanced.

D - By no means a blow-you-away red lager, but a tasty one worthy of trying. One of the better beers from their mixer pack for sure.

Poured into a lager glass.

A brilliant ruby-copper hue, about a 1/2 of head with great staying power. Lots of flecky lacing.

Nose is malty with notes of hops and caramel.

Starts off with a malty, caramel flavour and finishes earthy and slightly bitter. Very subtle notes of cherry or peach. Bitterness lingers. Took me about five sips to get into it, but now I'm digging this one.

An enjoyable brew, just about the right complexity. Would make for a great session brew.

A : Nice red color, a little head that do not stays through. Not much bubbles.

S : Caramel, some malt, the smell is not so strong.

D : Really easy to drink, I would make this a session beer.

3rd of four beers from this brewer's variety pack.

Tough one to pin down. Weak and watery flavours, the real taste doesn't kick in until after 3-4 steamboats(seconds)Then the toasted malts come through quite bold and flavour-rich.

Decent mouthfeel, the weak wateriness of the front end detracts a lot from the over all feel.

Not this brewer's best effort...i give it a meh.

from a mixed pack

poured into a pint,
belongs to a homemade hamburger

Taste: a bit nutty,caramel, malty, taste is good and clear, this is a decent rousse.

mouthfeel, quite friendly with low carboantion
so the taste is more upfront, so its nice

overall: drinkability is good, its easy to drink and it taste good, get along my hamburger very well. tasty with a good body.

S slightly nutty chocolate with some caramel and a little bread, fairly complex for a red

T not a bad thing that this mimics the smell it's quite good and would have gotten a 4.25 if possible

M a little flat but thick enough to please

The 3rd of 4 different styles from the Les Trois Mousquetaires variety pack. Pours out an impressive ruby brown with a bright clarity. Short frothy off-whit head that casually lingers on.

Chewy, bready toffee malt nose with some fig and raisin notes as well.

The flavour is okay, but very faint until already well into the aftertaste, almost like a late bloomer that reaches intensity over time. Bready brown sugar and raisins, sweet and sticky texture, fairly one-dimensional.

Smooth texture in the mouthfeel with a good presence of carbonation on the finish to help break up the monotony of the flavour.

Unfortunate, as this is a fairly forgettable amber that seemed to have potential at first, but whispers too much to be heard properly. The aftertaste is satisfying at least.

Appearance: Amber color, very nice looking with a nice head.
Smell: Mainly malts with some trace of caramel. The malt smell is very rich.
Tasted: Malt taste and the beer feels full bodied in the mouth however, it feels like a lager. This is a very refreshing amber lager.
Drinkability: Very easy to drink and very thirst quenching.

A must have in my fridge.

This beer replaces Aramis, which is now retired.

Appearance: Pours a nice amber-red body, kind of like cherry wood with a generous 3-finger head.

Taste: Smooth and malty but not too much. Bitterness is present near the end but that's pretty much it. A bit of a let down after a very nice aroma.

Mouthfeel: Slightly better, has a dry feel to it. Some not-overly coarse malt with a certain spicy finish. Some caramel buried in there with a touch of bitterness.

Drinkability: Not too bad. I wouldn't reach for another in the same session but once in a while sounds about right.

Overall: I let this one warm up a bit but found flavors were a little muted? Maybe better to drink it colder. Appearance and smell were right up there but the taste didn't quite deliver for me. Not bad by any stretch but nothing great either. It is a well brewed beer but it didn't do it for me. You decide!

Rousse from Les Trois Mousquetaires
Beer rating: 81 out of 100 with 26 ratings