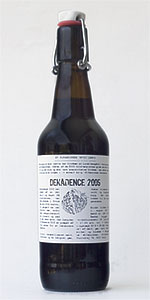 Wonderful bottle sent by Svend Nyman, bottle shop owner in Denmark. Aroma of real raspberry and some booziness. Great raspberry colour. A tad sour, above average mouthfeel. Some woodiness in finish. Rich and alcohol, natural carbonation. Something special and ageing could not have hurt.

Thanks to Rastacouere who sent this over from Denmark!

Appearance: You'd think this beer was once a little more reddish than it is, now it's sort of an off-brown murky color. For a high octane Beer, the head was pretty solid.

Smell: My first whiff was taken nonchalantly - I suppose I was in the middle of a conversation - and totally took me by surprise. Very strong perfume, somewhere between musky cologne and rose water they use in middle-eastern desserts. After my nostrils got saturated it got more of a sherry cask with a dollop of fruit juice thing going on. Very dynamic and evolutive aroma, good stuff indeed!

Taste: Lively, robust carbonation - another shocker for me, considering 13% ABV and a swig-top bottle - but it pushed the fruit flavor really hard, a pleasant sour raspberry then mingled with a round, caramel toffee malt richness. A tad bit of heat towards the end, but the mild acidity helped even things out, there is now way I would have guessed it was that boozy, which to me is a sign of success right off the bat. The fact that it tastes so good is like an added bonus!

I've never heard of this Beer, had no expectations from it, had it right after a phenomenal brew, yet it still managed to shine. My favorite so far from this great brewery. Denmark just went up several notches on my "countries I must visit" list.

The high white airy head sinks down to a thick lid, leaving a fine lacing. The liquid is a bit hazy and the colour very deep wine red with a tint of brown.

The complex smell got notes of raspberry candy, raspberry jam and a mild earthy sourness. It is overall strong, dry and pleasant.

The taste is sweet-sour with lots of fruit esters. Raspberries, toffee/butterscotch and salt. The sour notes are quite mild. The aftertaste is dry-sour and long with lots of raspberries.

The carbonation is not as strong as I would like. The liquid is a little watery.

An interesting raspberry lambic. However, it is kind of heavy and a bit thick when it comes to the taste.