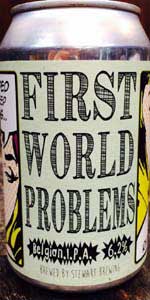 Very subtle hop flavour and a weak mouthfeel. This brings nothing new to the table. Refreshing but too drinkable for a relatively strong beer by British standards. It's nice but not worth the first world price in the supermarket.

L- Very deep golden amber. Pours with 3mm white head quite swiftly clearing towards lacing. Very slightly hazy with some tiny particles floating around visible.
S- Some stone-fruit on the nose, over towards peach or apricot.
T- Fresh, hoppy, develops into a bitter edge, then stone-fruit, and then some richness. Quite a long path! It is just on the hoppier-dry side for me, but it also comes with some subtlety and balance; it's no contempory 'hop-bomb'.
F- Refreshing, but I think you need to serve this well chilled, as as it warms the richer side of it grows. That's richness as in a sweet facet rather than richness from the 6.2%
O- I started off quite positive on this but as I sip my way through it the sweet aspect is rising and I'm finding that pretty odd and unwelcome. Not one I'd wish to drink again.
I nearly confused this with this beers namesake from Stickman Brews of Pennsylvania, USA, and had that on my Got's list until now. Take care to ID this the Scottish one.
Not sure where I bought this in London, perhaps Waitrose. BB 08/2019.

Canned in the pictured crafty craft can
pours a cleat barley coloured body with big foaming white head
creamy, golden syrup and lime aroma
there is that in the flavour
easy drinking

Nice balanced ale with subtle malty overtones. Does not taste or smell very hoppy considering the blend of 6 different hops. Definitely unfiltered with lots of nice green particulates in the glass. Pours copper brown with a thin head.

330 ml bottle from the LCBO. Pours a hazy mid amber with a 2cm head that quickly reduces leaving thin creamy head and moderate lacing. Look is somewhat spoiled by the large pieces of sediment floating in the body. Aroma: citrus, pine, fruit. The hop bitterness (over)dominates the flavour so that apart from a slightly musty indistinct fruitiness it was not really possible to identify the yeast driven characteristics one would expect from a "Belgian" IPA. Perhaps that is a truly first world problem.

330 mL bottle from the LCBO; best before Jun 2018 and served slightly chilled.

Pours a hazy amber-orange colour; its complexion is rife with flaky sediment flecks that are difficult to miss. Nearly two centimetres of foamy, off white-tinted head gathers at the surface, displaying superb retention as it remains in place for more than ten minutes. Not much lace generation, but it looks fine otherwise. The aroma is appealing, with citric grapefruit, lemon zest and mandarin orange largely obscuring the earthier, more floral hop elements. Mildly spicy, but not particularly yeasty for the style, with suggestions of peach and light honey sweetness.

But that might just be the high water mark of this review, because I'm not sure how much I like the flavour profile. At the very least, it's well-balanced, with a robust malt backbone - not all that shocking, given that a quartet of cereal grain malts were employed. Bready wheat, oat groats and faintly spicy rye, together with a mild caramelized sweetness, dominate the front end, with hints of melon rind and citrusy hop flavours of orange/grapefruit beginning to assert themselves by mid-sip. Floral, grassy bitterness comes to dominate on the back end, preceding a lightly spicy, earthy finish that lingers on into a hoppy aftertaste which fades thereafter. Medium-light body, with carbonation levels that start off strong, but weaken considerably as you sip your way through the glass. Smooth, slick texture that lets this brew slide down the throat with ease.

Final Grade: 3.89, a B+. Stewart's First World Problems is a drinkable brew, if a bit unmemorable - I had no trouble knocking it back, but I also didn't find it to be a very compelling example of a Belgian IPA. The yeast-derived characters are kept to a low background hum, compared to most examples of this style - an unfortunate fact, because that's generally considered to be one of the more critical aspects of most Belgian-style beer. On the plus side, the flavour profile is balanced, and it's actually quite a bit more quaffable than most BIPAs. A mixed bag; I'd consider picking this up again, but in the end there are many better choices within the category.

Pours amber copper with a smaller head that left minimal lace. Nose is mild, mstly on the herbal side with some citrus and light malt. Taste is herbal, honey, and malts. Not super exciting, but pretty drinkable for the ABV. A decent beer.

Bottle - decants a hazy golden-orange elixir in the glass....thin cap but the surface lace lasts- Aromas of pine and citrus , some stone fruit and sweet malts a bit of funk. Flavor is big on peachy-apricot tastes then the malt breaks out like raisin bread as the hopping gets increasingly bitter and dries up the finish something fierce. A decent pale ale, with a bit of Belgian yeast funk I like the dry finish.

Pours a gold slightly amber in color with a minimal one finger head on an aggressive pour. Minor lacing visible and break is quite quick. Smell is malt dominated with some nice citrusy hops sneaking its way in too. Taste is nice with the hops moving a bit more forward and then the biscuit and caramel malts coming in. Feel is medium with medium/light carbonation.

Well, it isn't spectacular, but it is enjoyable. A decent beer that I enjoyed on a warm July afternoon.

It's starts out as a surprisingly great beer, with a rather well developed balance. But just when you think that you have a winner, something happens, things fade and a disappointing watery taste comes to the fore.
Still, while not great, it's an enjoyable wanna be Belgian IPA, that is worth a couple of revisits.

330 ml bottle served cold into a pint glass. Best before June 2018. A Belgian IPA from Scotland? My curiosity makes this a must try.

Smell - Candi sugar and leafy hops up front with some yeast and hints of lemon. A sweet backing that reminds of passionfruit and lychee making for a pretty complex aroma.

Taste - Grassy, herbal with some tea like elements. Maybe honey and some lemon tartness, lychee possibilities on the back end. Pretty tasty, but doesn't quite live up to expectations based on the nose.

Mouthfeel - Medium bodied, very well carbonated, almost too much so. Very dry finish like many of the best Belgians.

Overall - A surprisingly good offering from Stewart's Brewing. I might not be picking up any other bottles, but if you're having to decide between having one of these or not, that certainly a First World Problem I'd love to have.

From a 330ml bottle served at 9 degrees Celsius into a chalice. Best before: June 2018.

Look: The beer pours a cloudy deep amber/light copper with .5cm of off-white head that lasts for less than a minute. Meh.

Smell: Hop-forward featuring pine, tropical fruit, and citrus (grapefruit). Gentle pale malt backbone. No apparent Belgian yeast character hence no esters or spiciness. It strikes me more as an American IPA than a Belgian one.

Taste: Same as the aroma with the potency amped up a bit – nothing to add.

Feel: Medium-light body with lively carbonation. Prickly and quite delicate with a mild astringency in the finish.

Overall: It's nice, refreshing, and pleasant to drink. Certainly misses the mark as a Belgian IPA - such a first world problem.

Came in my beer52 order. I've never tried Belgian style IPA before, so this will be a new experience for me.

Nose is big creamy, dank citrus. There's a slight white wine vinegar sourness which marries with grapefruit, lychee, and lemon zest. There's a highly noticeable Belgian quality to this beer already with a slight gueuze like aroma. There is also a slight undertone of caramel malt, and honey.

That bitter dank grapefruit flavour comes through immediately, along with white wine, citrus, and floral honey. Flavour touches on pine for a short moment, before turning more to bitter hops, malt, and forest honey. The aftertaste is a mixture of biscuit hops, tart citrus, and pine. The belgian-style yeast really comes through in those more tart, and sour flavours.

Feel is light and resiny, with very slight carbonation which I'm thankful for; with the already tart flavours in there to an extent any more carbonation would've introduced a tang that would've been too much.

Overall I'm not sure because I'm not a fan of sour beers in general, eventhough this wouldn't be considered dramatic in any sense of the word - it's just those hints of white wine which put me off slightly. The more I drink, the more I get accustomed to it, but for me it's still a bit too noticeable. Being objective I'd still recommend this beer because those bitter IPA flavours are indeed nicely balanced with the citrus, pine, and malt making it enjoyable. It could be the style in general which is making me fence-sit but all things considered I reckon fans of the style would enjoy this.

330ml bottle from Beer52 website (£1.62):
I had high hopes for this but it was a slight let down & one I had to take my time with. It had some tropical fruits & fresh, citrus flavours but the sweetness of the beer soon took over & seemed to dominate proceedings from the middle onwards giving the beer an unbalanced feel. The finish was overly bitter & it probably seemed closer to a Belgian IPA than an American pale ale; not one that I'd recommend.

From a 50 cl bottle in Edinburgh. (new and improved version says the brewery rep.)

Mild-moderate input from the Belgian yeast. Well matched hopping.
Good complexity with multiple fruit notes over a bready base and a light spiciness.
Very good balance and mouthfeel.

First World Problems from Stewart Brewing Ltd
Beer rating: 85 out of 100 with 43 ratings