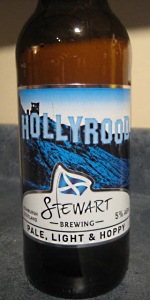 4 hops + none turn up. Watery, too. And poor handling by Lidl for the trifecta. Drainpour.

I have been on a work assignment here in Edinburgh for the last several months and I have to say Hollyrood is my favorite local English style Pale Ale. Extremely drinkable, delicious (slight traces of citrus), perfect amount of hops. Great head and lacing. Pint bottles are available at the local Sainsbury grocery store.

From a bottle in Edinburgh.
Light bodied with well set carbonation.
Light golden color with good clarity and a decent head.
Fruity with some citrusy hops.

Taste is mild. Some fruit hops on there, citrus and passionfruit with a note of herbs on the back. Some spice character, overall pretty mild profile. Some small grain notes, cereal and then bitterness. Pretty decent, but unexciting.

Small fizz on there, just a touch above the thin body.

Not bad, not really my thing though.

500ml bottle. Thanks to Rob from Noseworthy Imports and to Sherbrooke Liquor for the early peek sample. BB Jan 2013.

This beer pours a hazy, bright medium golder amber hue, with one stocky finger of fizzy and loosely foamy ecru head, which leaves but a low ebb of stringy lace around the glass as it wisps away.

It smells of mealy grapefruit peel, some generic tart fruitiness, faint grainy and edgy wheat malt sweetness, and a bit of leafy mustiness. The taste is more neutered grapefruit citrus hop bitterness, the fruit feeling old and tired, instead of brash and peppy, with the wheat pushing around the barley for the malts' speaking rights. A slight metallic tinge, and a mild gamey yeastiness simmers under it all.

The carbonation is rather sedate, and low-key, the body a wavering middleweight, kind of pithy, and not really all that smooth. It finishes mostly off-dry, the hops still restrained and musty, and the malt on an uneven blend of wheat and barley attributes.

Definitely an English pale/golden ale, with misbegotten hoppy aspirations. Far be it from me to question the results of the World Beer Awards, but 'world's best pale ale' is no small claim, and this falls quite short from backing it up. This is not a bad beer, per se, but nor is it the crisp, hoppy, and eminently drinkable entity that such a pale ale pedigree should entail.

I really have the hots for this brewery at the minute. But in that traditional Scottish manner despite being at the top of their game they keep a rather low profile and refuse to play the fame game. Oh well. Just as long they don't go out of business.
And I should apologise now for being rather sleekit with how I've indentified this beer's style. It's actually a pale ale/blonde beer, and won the 2010 World Beer Award in this category. But I've placed in the 'Scottish Ale' style since it's a pretty wide open category and is technically correct.

A dark cloudy yellow body is topped by a light very frothy head. Appetising and a very dry yet controlled grapefruit rind (and lemon too)taste approaching a medium. But it could still do with some more meat on the bones.
A very nice ripe palate cleaner.

Will do my best to think of this beer whenever I hear the word 'Holyrood' as opposed to that 1960's Brutalism twig carbuncle just next to Arthur's Seat.

Hollyrood from Stewart Brewing Ltd
Beer rating: 84 out of 100 with 31 ratings