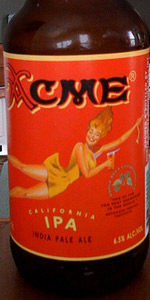 Murky orange amber colour with a frothy white head. Smells quite sweet malts and tea and fruity hops. Quite resinous and piney taste but medium on the mouthfeel with a dankness, medium carbonation. It's okay, quite nice.

The appearance had a very clear copper colored body with a huge three finger foamy white head, there is no carbonation seen rising. Some spider web lacing is seen around the sides of the glass. The smell had the malts up front, lemon and orange present themselves as the beer warms. The taste had a refreshing light crisp maltiness to it that I like as well as some pine presence comes out in the taste. On the palate, it sat at/about a light to medium with some bitter sharpness on the tongue, but a good sharpness. Overall, this is a good beer. I would say this is a mostly drinkable beer that I would definitely seek out again.

Pours a touch lighter than new penny copper with a medium head that leaves some lace. Nose is not terribly big, but a nice floral citrus blend vice the pine I was actually expecting. Taste has more grapefruit than anything and turns drier without a big malt backbone. Carbonation seems pretty high which leaves it crisp but not one to savor. Overall, a pretty good beer that is probably better on tap.

Aroma is subtle and fruity with spice. Definitely like...

Unique taste, citrussy and complex. Every sip is a true taste experience.

Quite dry also, not as fruity as some others, which I actually prefer...however this is truly unique and a special beer

Copper in color with a slight red edge on the outside, 2/3" firm head, good look to this beer. Aroma kicks down a lot of pink grapefruit hop nose. Old recipe, old school hops, still delightful.

Pours a medium amber with a big foamy white head with great retention. It leaves some small smears of tight sticky lacing. The aroma has a nice malt punch with light floral hops and the taste is much the same. The body is both lighter feeling but full with a light carbonation and a bitter bite on the finish.

First try for this one; fan of several other North Coast beers and realize this is kind of a classic of the early California craft beer scene. With that in mind, I'm not terribly surprised by what I found; a medium-bodied, less balanced and more bland than many of its current competition. That said, it is still likable. Good carbonation, nice hazy copper color, and slightly lighter feeling than average for the style. A throwback to be sure; I would like to see what North Coast could do with a new hop-forward beer.

I don't think I've ever had one out of this brewery and I reluctantly pulled the trigger on it to round out my mix a six. I really hope it isn't old. $1.69 for the single so even if it isn't much good I cannot complain all that much. Not feeling a big intro here, let's drink it.

Look - From the twelve ounce bottle hard poured into a pint glass. Beer pours a rather typical 8:35 P.M. sunset on a Californian beach in San Diego with a big frothy slightly off white head that starts leaving immediate stick as it slowly goes down. Carbonation is about moderate as I had expected.

Smell - The scent on this one is loaded with moderately fresh grapefruit piths and a large amount of malt to back things up. Juicy with mango though that aspect is just a bit stale and browning. There is a touch of the old ipa dankness smell going on as well though it isn't onion like nor cat pissy.

Taste - Very juicy and drying at the same time if that makes any sense. The grapefruit piths are all there but now they do seem a bit stale. Now there is a touch of the onion but it surely isn't offensive or overly so. A bit dirty on the back end with a super high level of malt that makes you space out your drinks a bit.

Feel - The feel is about moderate to heavy bodied with a massive load of carbonation. The flavors really unlock a bit more here and the onion aspects become more apparent though it still is not offensive in any way. A bit of a peppery like spice to keep things balanced. Swallows very juicy.

Overall - Overall it was a good beer but it would have been better if it were fresher. They kept the hops in check even into their old age. Easy to drink without anything offensive. Worth the price tag I guess. I'll try more from these guys as long as I can get it fresh..

Poured with a nice golden hue typical of the style with a slight head of foam. First taste revealed a generous amount of hops and a nice malt backbone, a nice balance. The 6.9% abv was well-hidden and actually went extremely well with the fish & chips I was enjoying. Truth be told, I selected this because it was a "west coast" IPA that I hadn't heard of and it is one of my goals to try them all! I'll have this again should I come across it!

Poured from a 12 OZ bottle into a pint glass
Aroma- Has a nice malt and fruit aroma
Appearance- Pours a murky golden amber with a nice off-white head
Taste- Hops come through nicely, with some malt as a backup. very flavorful
Palate- A medium bodied beer with moderate carbonation. This beer has a crisp finish.
Overall- A really enjoyable beer, I will drink this again.

My father and I picked a couple of these up on a whim. This is a good beer plain and simple. The clarity and color are pleasant to look at, the taste is good and the smell is yummy. If I was to label it anything it would be to say it was more like an Imperial Pale Ale due to the malty taste and color with the lack of a high ABV and bitterness. All in all this is a beer I will keep on hand from now on.

Quick review. This is one of the first IPAs that really spoke to me. It's an odd-duck for the style, focusing more on fruit (odd fruits like apple) than straight hop-chop. It's so quaffable with a light body & pretty damn good carb too.

appearance not quite as dark as most IPAs but this isn't like most IPAs.
Tart, citrus aroma, taste not too far from. Bitter aftertaste.
A unique IPA.

Pours a slightly hazy dark amber with a thick, pale golden tan head. Aroma is decidedly hoppy with a fruity undertone. Hoppy flavor has yeasty and malty notes and a sort of varnishy hint. Smooth texture has average body but good fizz. An acme? Maybe not, but tasty.

A: Pours slightly hazy golden amber with a frothy off white head that settles and laces very well.

S: Fruity, some floral notes, with some light malt sweetness.

T: Floral hops, some fruitiness, maybe a touch of very light citrus, earthy, with a light caramel malt sweetness. Fairly crisp, but not that bitter.

O: This one just strikes me as odd. For a nearly 7% IPA with California in the name I was expecting a bolder hoppier brew. This reminds me more of a Belgian style IPA with all the fruity notes, but also like an amped up pilsner. Not a fan.

Hazy golden pour with thin, clingy white head - looks great. Nose is floral and earthy, not to my liking. Flavor is some malt and not much bitterness for an IPA with same earthyness. Best part is the appearance, no need to drink.

S - citrus fruits dominate, with some caramel and a hint of pine

T - Initially sweet and sour citrus like flavours (grapefruit), followed by a resepctable resin bitterness halfway through. The finish has earthy malts, moderate bitterness, and lingers.

O - reasonable IPA - not too bitter. More like a pale ale.

On tap at Tony's Darts Away in Burbank, CA.

Pours a hazy gold with a foamy beige head that settles to a small cap on top of the beer. Foamy swaths of lace form around the glass on the drink down. Smell is of malt, citrus zest, and herbal hop aromas. Taste is much the same with citrus zest and herbal hop flavors on the finish. There is a mild amount of hop bitterness on the palate with each sip. This beer has a lower level of carbonation with a slightly crisp mouthfeel. Overall, this is a pretty good beer with a nice balance of citrus and herbal hop aspects all around.

This beer has a lot going for it. It has a thick mouthfeel and pleasant honey flavors. It has a very bitter flavor while sipping that lingers as a strong aftertaste. This is something I am not particularly fond of in beer, though it's something that others sometimes look for. I finished drinking the beer I used for this review but I wouldn't buy a 6-pack of it. If you like hoppy IPAs then you might love this beer. It's other flavors are quite nice.

Pours two fingers of head on an almost clear medium straw colored body.
The aroma has some apricot, banana and orange. A nice departure from the normal IPA but too faint.
The taste is malt forward, but maintains a mild to moderate bitterness from the middle to end. The finish is a longer bitter.
The texture is softer with moderate carbonation.
Excellent balance and tastes great.