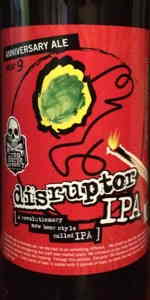 Pours a nice reddish gold. Decent amount of head and lacing. Has a welcoming aroma of hops with pine and citrus. Has a initial burst of hop bitterness but it fades quickly to a light and sweet wet hop taste that makes your mouth water afterwards. It doesn't finish bitter or linger on your tongue, just a tasty citrus/pine sweetness. Very drinkable and I enjoyed this a lot.

22oz bottle with alarmingly ironic, I hope, packaging. Poured into a pint glass, the resulting liquid is pale, murky yellow. Wouldn't be particularly appetizing as an IPA, though it does form a very tall white head. But holding it up to the light one can see there is a LOT of stuff suspended in here. Oh, and the aroma is an overwhelming field of flowers. Sweet, delicious hop goodness dominates the nose. Okay, maybe they weren't being ironic when they said they "discovered" dry hopping.

Flavor is an assault of alpha bitterness. I suppose given the illustration of a hop cone with a fuse and a lit match, that is not surprising. Malt body is neutral and relatively thin, I suspect the presence of wheat? The previously mentioned suspension of unidentified beer particles harms the texture and drinkability of this IPA for me, unfortunately. But as with many West coast IPAs before it, this beer showcases some seriously high alpha hop varieties, without letting antiquated ideas around "malt profile" and "flavor balance" get in the way. Oh, and did I mention it's ugly and needs fining? But what really sets the beer apart is the fantastic floral aroma. Worth a try for that alone.

Orangey amber color and quite sudsy with each pour in the Affligem chalice. Frothy and a little harsh on the tongue. Inviting aroma of orange blossoms and apricot, something piney. Light stabblingly sharp body.

This is very grapefruity and quite bitter. Dry pineapple and a lovely touch of mango. But the mellow fruitiness comes with a cost-- mouthfilling bitterness.

Classic IPA for those who like the punishment. Gratuitously bitter. From the 22 oz bottle purchased at Elizabeth Station in Bellingham.

Pours a deep honey color with a big bubble head that coats the entire glass, rather than lacing it. Aroma is mostly of earthy, musty pine. Taste is what you would expect from a big dry-hopped brew and delivers the same swampy flavor the aroma promised, although it might be a little one dimensional. Mouth feel is as smooth as can be and this one feels real nice going down. It might have a hard time finding an audience unless there is already a historical one built in, since it is at once too bold and hop forward for casual drinkers, yet it seems not broad and complex enough for hop heads.