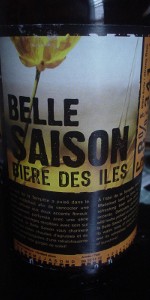 Bright pale straw color with low activity. Foamy white 2-3 finger head, lasting around 5 minutes, with poor legs. Flavors of ginger, nutmeg, caramel, lemon, peach, sweet grains and floral hops. Smooth oily full body with a light crisp. Light strength finish, slightly floral and spicy, a little fruity but not much, more like caramel and a bit corny with a hint of vanilla. Poor yeast profile having hardly no barnyard feel nor much wild yeast, just a bit rustic. Very delicate, too much, even less than a table Saison. It's highly accessible though. Strange cross between a Saison and Amber (I guess). At least the body is pleasant and well rounded, but gets quickly dull from the lack of carbonation. Overall average quality craft.

Appearance: It has a nice hazy pale straw yellow color to it. It has a nice thick white head that dies down moderately and leaves some spotty lacing.

Smell: The aromas definitely give out hints of peppery spices, ginger, grassy and floral notes, herbs and a touch of lemon.

Taste: Like the aromas, it has peppery spices, ginger/cinnamon, grassy/floral/herbal notes and faint lemon zest.

Drinkability: It's a very smooth drinkable beer accompanied with good flavors and aromas. Not quite what I was expecting from a Saison.

Smells grassy, maybe something spicy like cilantro? The bottle says "perfumed with wild herbs picked on the archipelago."

First impression: a little spicy, then a grainy finish. Pretty dry -- not much sweetness to this one. Probably not my favorite implementation of the style (saison, that is).

Was better when paired with food. Not bad, but not worth seeking out again.

Obviousy spicing on the nose. Quite herbal, heather would be the closest thing to mind. Touch of vanilla sweetness as well.

Spice is right up front. Again, herbal notes with a bit of zing, couldn't tell you exactly what from. Malt is very clean through the finish.

A bit thin in the mouth. Lively carbonation.

Not something I'd pick up again. Nice patio beer maybe, but not as satisfying as similar brews out there.

Overall: Understated yet interesting nonetheless; more of an herbed/spiced brew with saison highlights than a true saison; definitely worth seeking out.

This is a nice saison. I am surprised at the low ratings, as this is a good beer.

Pleasant and unique saison, new at St. Hubert trip. Very floral, with ginger being the only significant outstanding scent. Pours light yellow with a small lasting white head, and leaving lace dots throughout the glass. Consumed in my Ithaca Beer Co. glass. Average mouthfeel, carbonation right there. Decent drinker and refreshing. The taste was mainly ginger, with other herbs including chamomile, and cardamom, pepper.

Pale yellow color beer, clear. Little head. Some effervescence is visible. The aroma is floral and inviting. In the mouth, I get some floral notes and grass. The taste is good and the beer is light and refreshing. Very thin in the mouth. Effervescence is present in the mouth... I would have expected less by the looks of the beer. A good beer, however it isn't cheap.

Bottle: Poured a light yellow color ale with a small fuzzy head with limited retention. Aroma consists of weak malt with very subtle notes of herbs. Taste is also a mix between some weak malt notes with some very subtle herbs notes. Body is light with medium to low carbonation. Quiet disappointed with this one since I was expecting a bigger malt backbone and more presence form the herb mix.

Pours a clear pale gold with a finger of fizzy head. Plenty of visible carbonation.

Faint herbal scent. Like another reviewer, it reminded me of the pumpkin spice used in pumpkin beers.

Taste is also similar to pumpkin spice. Some slight sweetness. Some mild bitterness at the end.

Missing the yeasty qualities I tend to expect in a Saison, but still an interesting brew. The spices are quite interesting and tasty. Overall doesn't feel like 5.8% and I would expect it to be a decent session beer.

Pours with a clear body, glowing light-golden in colour with a ring of bright white head. The colour is attractive but the head could use some improvement.

On the nose: light wheat, something soft and vegetal like pumpkin, light cinnamon, coriander and allspice, herbal hops. Not at all unpleasant but much too weak.

A delicately flavoured saison quite reminiscent of a pumpkin beer (as the nose suggested), oddly enough. Light and wheaty malt with some honey and a subtle herbal hop bite toward the finish. Spices are light but definitely a mix similar to pumpkin pie: cinnamon, allspice and clove, although joined by some definite coriander and a touch of lemon. The label states that it's brewed with wild herbs picked around the brewery, so I guess this is the origin of the unique spice character. Light mustiness, though not of a 'barnyard' character. While it clocks in a little over the standard 5% ABV, this brew drinks like a much lighter beer, feeling more like 4-4.5%.

A drinkable if mostly unmemorable beer, though it does share that same certain freshness I've noticed and enjoyed in a couple of this brewery's other offerings. Light and well-balanced; I guess I'd enjoy a few pints of this along with a nice sunny day (though unfortunately not at this price). Also, I'd say this one is enough along the lines of a saison (whether accurately brewed to style or not) to be considered as such.

Appearance: A clear yellow body with a very white and generous head that reduces itself to one then next to nothing after.

Smell: Citrusy and flowery mostly with some honey sweetness.

Taste: Aromatic in flavor with a tinge of sweetness, citrus fruit, herbs, grassy and maybe honey.

Mouthfeel: Brief snap of carbonation with a light body though still robust enough. It has the feel of a cask ale a bit as well.

Overall: A refreshing summer beer that is not perfect but still pleasant. Easily drinkable despite the average mouthfeel.