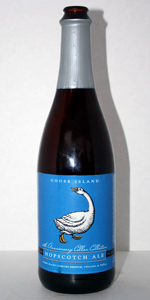 Harmony:
Nice ale, but not a standout.

Would I get it again?:
No

amber. Great retention as it only faded ever so slowly and still left behind about a half inch or so throughout the entire session. Great side glass lace was apparent throughout as well.

nice hoppy bouguet, a bit floral, and not very citrusy though. But this was only on the top as the main body of the smell was made of sugary malts which really domintated here. Lots of light earthy tones subtly very good and a solid offering here. Great malted flavor, light grain and cereal touch to it. A bit of a dry hoppy finish, but nothing strong by any means rounded it out. Had a very earthy feel to it. A nice light ale, almost a pale, but a little bit bolder then that. Still more then decent and very well put together.

Came in a well prepared pint glass that was room temperature with a very good pour. Not much head to speak of. Appearance was dark and pure with scant bubbles and an ever so faint effervescent head. Smell was sticky and sweet, a light pale ale character. Taste was good and balanced. Mouthfeel was full and good drinkability.

Cloudy orange-with a brownish hue. Thin, white head that fades after a minute or so. Decent lacing.
Smell is bready malts with faint notes of vanilla, oak, and toffee. Light hops. Subtle notes of jamberry.
Taste is very bready malts with notes of vanilla and oak. Subtle hops follow. Finish is a pleasant blend of malts with vanilla and toffee notes.
Mouthfeel is smooth and creamy, with a fairly low level of carbonation. Light-to-medium body.
Drinkability is very good. Tasty beer.

A= This ale poured a hazed gold/orange color with a 1/2" white head. The head dropped fairly quickly and left some spotty lacing down my glass.

S= Sort of surprising really, as I was expecting a hoppy American APA and this turned out smelling sweet and very much malt-forward. Not bad mind you, just other than what I thought I was getting. The hops that were present in the nose were leafy and threw out some dry earthy aromas.

T= Much like the nose indicated, this was a completely different beer than what I would have expected. Sort of tasted like a Scottish 70 shilling ale with just enough American and British hops to pull it into the APA category. Sweet and caramelly malts, a hint of toffee, balanced against lightly bitter earthy and grassy hops and a chewy nutty character. Esters were light and fully in-check. Finished medium with an aftertaste leaning toward sweetness.

MF= Medium bodied with a creamy feel and moderate carbonation.

D= It took me a while to "get" this beer, but once I sort of figured it out I actually enjoyed the pint. Easy enough to drink that I could see myself able to session 2-3 of these if I took a mind to.

On tap poured into a tumbler at the Clybourn brewpub. Pours a rich golden amber color with a minimal white head that leaves no lacings and doesn't retain for long.

Aroma is of grassy hops and wet hay, with a distant and lightly bready base of malt. Little else for the nose.

Taste follows the nose with a bit of an earthy quality and a light caramel presence. Finishes a bit stale with wet hay lingering. Not very well balanced.

Mouthfeel is medium bodied with a lightly stale character, mostly from the wet hay character. Needs more malt to balance the hop quality.

Drinkability is decent. This is not a normal GI brew in its lack of balance. It is quite fresh tasting, but the earthy quality of the hops is easily taxing on the palate, and lingers well after swallowing. Easily passed up.

I noticed that there were two listings for this, this one, and a separate one for the cask version, so I choose to go here, but serving type cask.

Pours out a yellow-copper color, like a clear orange color. There was a nice head at the start, which gave me a good whiff of the beer, but it collapsed, as I expected, quickly. A nice looking beer. The smell is filled with malt sweetness. I can detect some earthy, kind of herbal hops, almost like dirt and leaves, mixed with the wooden cask smells, with a light smattering of orange and tart cherries. Nice smells here, too. You start with a light woody taste, with some nice caramel malt sweetness, kind of like a toasted cracker. Very minimal hoppiness, really only detectable as a kind of spiciness, with some zest in the finish. Really the malt here is well-balanced with the flavor of the wood, not the hops. Very interesting I think. Good mouthfeel. There's a nice fullness from the wood, especially enhanced by the low carbonation. I think the beer by itself would be a bit thin, but still enjoyable here because of the serving type. The head, early on, make it taste a bit creamy, but once it was gone, it just had a light syrupy feel. Sometimes I wish I knew more about cask ale - but I'm working on it (honestly, at first, it made most beers taste like kind of watered down scotch, but picking out the beers flavors is getting quite a bit easier with this serving type now). It may make me like some beer more and some less, but I did enjoy this one. This one drinks pretty well, kind of quick, but you still want to slow down and enjoy it.

A - Pours light copper in color with a white head which fizzes away quickly. A small amount of lacing slides down the glass, but not too much.

S - A good mix of light hops and malts makes this one a nice one to sniff on. I would say it's amongst the better-smelling APA's I've sampled.

T - Very smooth, nice light hops mixed in with a good combo of malt. Neither are overpowering by any means, but meld together nicely. More of a light malty finish but no real bitterness.

M - I really like the feel on this beer. Nice and light, clean, and refreshing. Good carbonation and just simply enjoyable.

(Served in an American pint glass)
Now it is called Hopscotch Ale and the Cask is dropped but it is the same beer.

A- This beer has an apricot colored slightly hazy body with a gentle carbonation. The head is a bubble off-white creamy that is pretty thick and last for a good bit.

S- The smell of green pine hops has a soft dry toasted malt nose in the background with a note of raw grain husks.

T- This beer has a big green hop flavor with lots of pine flavors and citrus rind bitterness. There is a slight nougat note followed by a lightly toasted malt flavor and a hint of biscuit that increases just a bit as it warms. A nice pungent hop bitterness finishes this beer nicely.

M- This beer has a medium mouthfeel with a watery texture.

D- This is a good drinking beer with nice balance of hops flavors and malt flavor witwh a nice kick of bitterness in the finish.

Beautiful slightly hazed amber color without any discernable carbonation in the glass. The head is minimal, but does lace a bit.

There is a moderate amount of piney and floral hop aromas with malty sweetness intwoven.

Taste is slightly off-balance witht the hops predominating. Nice and crisp taste with a malty sweet middle and a bitter ending.

Slick with the heretofore hidden carbonation showing itself in a slight bite.

Draft, at Goose Island. As part of their Single Hop Summer, GI made this batch with Tettnang hops. My pull had very low carbonation, like a Bells Two Hearted I once had, so theres a nice comparison there. The hops were much more assertive and bitter than I would have expected from a nice German hop, it somewhat overpowers the lighter sweetness of this light brown malt beer.

Sampled on Cask, tapped same day
Has a subtly fruity nose, with some light citrus notes. This has quite a nice nose to it, though it is muted. The beer is served fairly warm, at least 60*F and probably a bit warmer. The taste is lightly buttery from a bit of a diacetyl component. There are some definite fruity notes here as well. There is a nice spicy hop finish. This beer needs more malt. It was billed as a Scottish ale with hop notes, but it is certainly more hop than Scotch.

I've heard that the brewers for Goose Island put their best efforts into their cask beer and I'm about ready for something hoppy to have with my burger, so I order a pint of this seasonal beer. I'm very, very pleased with the results. For starters, it looks absolutely lovely. It has a robust, phenomenally persistent foamy head which dimples slightly. The beer itself is a striking, deeply bronzed amber with hints of ruby.

The smell is very subtle, but quite nice. It takes me lots of sniffing to cue in to it, but when I finally do I'm rewarded with a bouquet of hops and hay.

The first stage has that watery quality I've come to expect from a cask beer, but from there the taste ambles unhurriedly all over the landscape. The initial wave is watery and slightly malty and creamy. Then comes a very round, slow, sneaky onset of hops with a reserved and austere bitterness. This gently transforms into a slightly metallic sizzle of bitterness on the back of my tongue that's wonderfully dry and snappy. The overall experience is of a pleasant walk over a smoothly rolling landscape of tastes.

Before I ordered this pint I'd had five ounce samples of three of their other beers, and sips of two or three more. The mouthfeel of the Hopscotch left them all in the dust. Its regally subtle procession of tastes was lovely with the burger and mashed potatoes I had. It's not quite as hoppy as I'd expected, but it's a bloody fine beer.

Hopscotch Ale from Goose Island Beer Co.
Beer rating: 83 out of 100 with 37 ratings