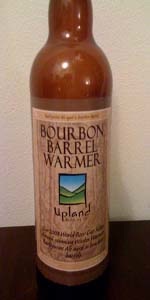 A: Clear chestnut brown with minimal head, slight tiny hiss when opening. nearly perfectly clear. Time in the bottle has let this one settle out.

S: Aroma of sweet cherry, caramelized sugars, plum, subdued barrel and barely present bourbon, I would hesitate to know how much time passed prior to the barrel being used again, or however long it was, the bourbon is very faint.

T: This beer starts like a nice english barleywine, very faintly hopped with a very low alpha hop, abundances of caramel, vanillin, some stale carboard / oak barrel flavors in the background. This was apparently the Buffalo Trace barrel year, which is a whiskey i have not had, and makes me curious to know where the flavor notes are in the whiskey itself.

M: Relatively flat and seems basically appropriate for an english barleywine, but just a little too flat for my liking. Based on reviews from years following this batch, it seems like they may have taken care of that item as it seems the 2013s are drawing a full finger of head. Maybe worth reviewing again, but then again.... I have a lot of barleywine in the cellar and I dont know when I will be trading again for more from out of state in IN.

O: Overall, there are some good characteristics here. I have been sitting on this bottle for a few years in my cellar and it is a good barleywine, but not overly impressed with some of the flaws that are going on here. Slightly stale, slight cardboard hints, not much bourbon flavors. Other than that, it seems like the body is on par, color is nice and I would have to assume has improved with more recent batches.

Bottled in December of 2013. Have had this for a long while after buying it at a discounted price of $3.99 for a bomber.

Pours a cloudy dark brown amber color. Lots of sediment. Finger and a half of a tan head.

This was a big surprise, as I didn't expect much given the discounted price a while back. This was a very well done BA English Barleywine. The barrel presence, even after 2 1/2 years, was still very present and melded well with the base. I wouldn't be surprised if this is what Upland now calls their Barrel Chested Barleywine, as it is eerily similar.

App- Dark caramel brown body with a nice one-1/2 finger white head that retains quite well and drops slowly. No lacing, looks darker than a typical scotch/wee heavy.

Smell- Initial nose impression is almost cologne-like, kind of a minty and even a bit chemical-like. It's interesting and a bit different. Also a very sweet toffee nose from the base beer, a little bit of vanilla and oak barrel.

Flavour- Caramel, toffee, hints of vanilla, a bit of oak barrel and sweet bourbon. A touch of dark fruits. But this is definitely a toffee-forward beer. It's solid, nothing mind-blowing. Would have expected a bit more barrel here.

Mouthfeel- Medium bodied, fine carbonation, on the thinner side of what I'd expect of an a BA English Barleywine. A bit hot and boozy.

Overall- Decent BA English Barleywine, nothing too special but certainly still a treat in of its own. I don't get any spices which you'd expect from a "Winter Warmer".