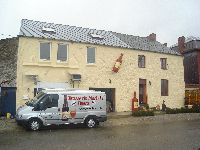 The first stop on the Easter Sunday during our annual Wakefield CAMRA 2006 Easter Belgium Tour was to be the rather strangely named Brasserie Artisanal Mortals Beers, first opened on a commercial basis in March 2003.

It is hard to miss the pastel yellow painted frontage. The original part of the building seems to be the right hand portion. Two-thirds of the building on the left hand side now sports a new roof & white framed windows, easily distinguished from the right hand third that still sports its original roof & brown framed windows. These subsequent extensions & refurbishments have resulted in a building that now houses Brasseries Mortals Beers Brewery & Bar area.

The Brewery itself is a compact affair that sits nicely into the far left hand end of the building. Newly installed sliding glass doors allow site-seeing without entering, but our pre-booked Tour revealed the interior to be a shoe-horned affair that had a pseudo-organized feel to it. Its all in here; a mini Zymurgical cosmos; brewing, kegging, bottling, labeling and packing. An open garage to the right of this allows space for the storage of all kinds of ingredients and brewery bits and bobs like gas tanks and empty bottles. Continuing to the right brings you into the original part of the building and the entrance to the Bar & Restaurant area which sports some coniferous foliage and wooden flower boxes. Just above & to the left of the front door a large 5ft tall brown bottle is mounted at an inclined angle & advertises Salon de Dégustation. The solid wooden door has a small white sign which announces that the opening hours are Dimanche de 11h à 21h; to the left of this another huge beer bottle that advertises the Brasserie Mortals induces many a photo opportunity from the passing English.

The Brewery bar is open to the public every Sunday from 11am until 9pm, and they may accommodate different times for large parties on a pre-arranged reservation basis. Our party of 30 stormed the ramparts on Easter Sunday, so we ended up sharing the place with a few locals and it soon filled up. The Brewery Tour didnt take long so we soon settled down and packed the tasting rooms. As you enter, the unisex one-in-one-out toilet is to your left, a flight of very steep wooden stairs takes you to two rooms on the first floor, whilst on your right the main ground floor opens up into an L-shaped room that stretches back. The Bar is just around the corner to the left and sports a single stainless steel Tee font that houses four taps, an additional tap to the side delivers a fifth beer. The interior is also painted in a pastel yellow with orange décor around the windows. A small presentation area just inside the entranceway displays the wares; T-shirts, glasses, ceramic cups and a range of bottled beer packs from those horrid woefully under-designed cardboard jobbies that house 3 x 750mls through to those long thin wooden boxes, the metre long one contains 16 x 330ml bottles.

The beers all have a serious background, but some of them do seem to have a tendency to stray into the joke beer arena often with, for example the Kool Mortal, a foot firmly in both camps. Served very cold it was often hard to appreciate the beer until it warmed. The wide variation of styles does make it difficult to make any general sweeping statements about the brews on offer, the quality is OK, but the styles are very personable, cutting swathes right across our party, and returning everything from hate it to whatever to love it votes. The beer range is certainly varied right now, and I it seems that it could even expand further.

Our party enjoyed the food on offer, it was all pre-ordered before we turned up and avoided the usual chaos when 30 people order food, so it was all presented efficiently in good time - not an easy task given the size of our group and the Kitchen! It was, in short, some "fine snap" as we say in Yorkshire, lots of local fare and all expertly prepared. I recommend the food if you get out this way.

Jean-Pierre and his girlfriend Fanchon, plus their friends, all made for a very enjoyable Sunday lunchtime visit, the Tour was fun and the atmosphere was very relaxing. Standing outside with a beer in hand, chatting to the smokers in our group whilst watching the first swallows of spring fly & swoop past just added to the easy-going quiet rural calm. Delicious food, all accompanied by a varied range of brews, makes for a fine outing. It may take you some sampling to find the Mortal beer that suits you though!

Brasserie Mortal's Beers in Jamagne, Belgium
Brewery rating: 3.46 out of 5 with 0 ratings