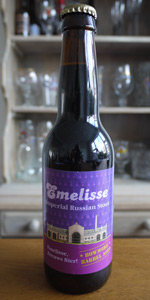 Picked this up at the beer store at the De Molen Brewery. Dark brown-black pour with one finger head that fades quickly with minimal lacing. Somewhat subdued and nondescript nose with dark chocolate and cocoa up front, with hints of wood, alcohol, and peat. Lots of burnt coffee and smokey, roasted malt in the taste. Slightly boozey, but kind of expected with an 11% ABV beer. Bitter dark chocolate, tobacco, and a really nice woody character round it out. Very nicely balanced with just enough sweetness to offset a nice, bitter finish. And after the initial booziness, this turned out to be a very drinkable beer. Another solid offering from Emelisse.

I originally had this at BOREFTS 2010 in Bodegraven. It was absolutely fantastic! I bought a bomber of this a couple months later and it was completely flat. The brewery said they would refund my money, but several emails and a few months later, I've given up on ever seeing that refund. I'll simply enter the review of the flat bottle until further notice.

Got this bottle at De Bierkoning in Amsterdam.

From a bomber into a snifter.

APPEARANCE: A dark brown pour comes out flat and leaves a bit of a bubbly head. Black body and no carbonation; looks quite still. A few bubbles stick around for a while, but ends up looking flat and is generally unappealing.

SMELL: Medium nose of roasted malts, some molasses, caramel, as well as some oak and wood from the barrel. Very oaky for sure, but the base beer is still there. Not as bold as the original, but nice.

TASTE: Roasted and sweet caramel malt up front, with some toffee and sweet molasses, just like the base beer. Lots of oak and wood from the barrel, as well as some tobacco and smoky elements as well. Some bitterness at the swallow, with pure chocolate, oak, and tobacco riding out the lingering aftertaste. The barrel has imparted some nice flavors on the beer, and has also helped curb the booze in the base beer. Very nice and flavorful, but too bad it’s completely flat.

PALATE: Flat. Medium body, but no carbonation at all. I’ve had worse still beers, as this one is not cloying or anything, but it certainly doesn’t satisfy my appetite for a beer. Definitely needs some bubbles to make this more enjoyable.

OVERALL: Man, what a disappointment. Sometimes you never know with these small, Dutch brewers. The beer was fantastic at the BOREFS festival back in September, and the quality is still there in this brew, but the lack of any sign of carbonation really hurts. On the positive side of things, the barrel has done its work really well, adding layers to the flavor without dominating the base beer, and has also tamed the boozy elements in the original. Hopefully this was just a bad bottle and I’ll get lucky somewhere down the road.