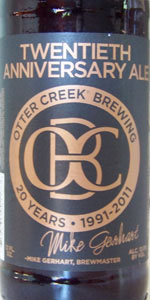 In Pop!ping the cap, there was no question but that I would be going with a VERY gentle pour afterwards. An in-glass swirl raised a brief finger of foamy, light-tan head with modest retention that reverted back to wisps, leaving nice lacing in its wake. Color was Coppery-Brown (SRM = > 17, < 22) with NE-quality clarity. That is an understatement! It was filament-bright! Nose was bready, very malty sweet, with notes of maple, honey & even a light mintiness, the latter of which was completely unexpected. The fusel heat had still not subsided & tickled my sinuses with its presence. Mouthfeel was thick, not quite viscous, but it laid on my tongue like a beached whale. The carbonation was beginning to wane with time & so it was like a dollop had been scooped onto my tongue. I let it roll around to further warm before swallowing. I will bet that this was hot as hell as a young beer! Even now, the warmth suffused the beer, giving it a brandy-like quality. The taste was bready, at base, with notes of dried, dark fruits; leather; dark, but not burnt, caramel; drying tobacco; toast and honey. Whew! OMFG! I wonder if I read that it was hot & needed to age when I originally purchased it or if it were just a happy accident to have had it around until now. They might be calling it an American Strong Ale, but arguments could be made for English Barleywine (no evident hops) and/or Old Ale. This had aged beautifully. Finish was dry, mainly due to the residual heat that lingered well after the swallow. Phew. I might even amend my last to include American Barleywine as I did get a cool mintiness on the extreme finish. Wow! Get the sensation.

A rich malty aroma with caramel, biscuit and bready. Some yeast floral, alcohol, and earthiness is present.

A nice toasty malty flavor with caramel biscuits, and some bread. Yeast, floral, vanilla, earthiness, and some phenols round off the taste

The mouthfeel is carbonated, and warming.

This beer still packs some heat with the alcohol despite the age on it. The flavors in the beer are ok. i was not impressed or unimpressed with it. A decent offering.

Reviewed by AndyAvalanche from Massachusetts

Smell is pretty good. Smells of leather, wax, vanilla, both read and black licorice, and maybe a slight touch cinnamon. It's all there, but it's not very strong.

Taste is great. Great malt backbone. Sweet brown bread. Both red and black licorice again, and flavors similar to the candy of wax soda bottles at the penny candy store. Again there are strong notes of vanilla but now with brown sugar, honey, and a bit of cinnamon. Tastes very good, but very sweet.

Mouthfeel is good, full bodied beer with a nice long lingering flavor. Modest carbonation level, slightly tickles your tongue. Some heat from the alcohol, but I still wouldn't have guessed a 12% beer. Very drinkable, a nice sipper. I good representation of the 20th Anniversary of a great brewery. I love the fact that it's a 12 oz bottle too.

Reviewed by krasnoludek from France

Pours with little head and has a pleasant medium brown color. It was fairly opaque due to all the particulates floating around after the pour. They still hadn't settled after a minute. Scent is very toasty and malted, with a "tingly", yeasty sensation you get from freshly baked bread. Taste of toasted sesame, followed by a light caramel sweetness and a bitter finish. It's very particular, and my spouse hated it, but for me it's just the right mix of sweet and bitter. Alcohol content not noticeable in the taste.

Reviewed by ricknelson from Vermont

Reviewed by facundoCNB from New Jersey

3.37/5  rDev -7.2%
look: 3.5 | smell: 3.25 | taste: 3.5 | feel: 3.25 | overall: 3.25
a deep amber pour, a finger of off-white head which quickly dissipated. smells of barley, caramel, brown sugar, lots of sweet grains. a bitter-sweet malty flavor with a huge alcohol kick. slight roasted flavors give off nutty like taste, mixed with what seems like pure barley juice. it feels like there's rye in here as well - almost a chocolatey flavor. full body with low carbonation.. somehow it feels a bit watered down for its strength, which makes it easy to drink - and dangerous.

there is an overall sense of booze in this beer, which is a bit intimidating. the taste is much bitter than the aroma given off by the sweet sugars of the grains. the mouthfeel wasn't all there.. for an anniversary beer, this is kind of a disappointment. otter creek is capable of much more, i think.

S: Dark fruit of plums and prunes with some boozy sweet caramelization with spicy herbal notes of tarragon and parsley. Some sweet figs are also well noted here.

T: The flavor was lighly boozy, not as strong as the 12.0% you would think, the sweetness hides most indication. Some plums and cocoa and again spicy herbal notes of tarragon are evident along with the sweet sugary figs.

M: The mouthful had a gentle warming of sweet dried boozy fruit with a syrupy texture and an average rate of carbonation.