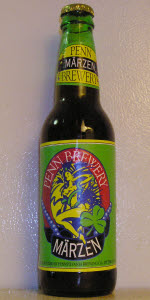 4.08/5  rDev +7.4%
look: 4.25 | smell: 4.25 | taste: 4 | feel: 4 | overall: 4
Poured a new penny copper with a tan 2 finger head that dissipated slowly to a thin film. Little lacing. Pronounced toasted bread and malt nose with a fruity essence. Taste follows the nose with added light grassy hops on the finish. Moderate-thin body and carbonation. Crisp and refreshing. This is very nice and drinkable!
Feb 29, 2020
Rated: 3.75 by heerboth from Pennsylvania

Reviewed by Jon_Hendricks from Pennsylvania

Reviewed by Brian_L-2056 from West Virginia

Reviewed by Bone53 from Pennsylvania

Updated 5-27-20 as I think this is outstanding and I was out of my mind for that low rating. It's very malty and sweet and talk just like a good Oktoberfest does.

Revisiting again 7-24-22 and even my updated review in 2020 may have been a bit modest. Keeping it as rated for now however.

Its incredibly fruity and mildly estery. Its almost like a low ABV quad that was lagered.

Reviewed by pianoguy from Washington

From the beer of the month club...

Poured a light brown, copper body with a 1 /2 inch off white head that didn't last long.

I'm not getting much aroma. Just a faint apple smell, some type of malt?

Taste kind of follows the smell, there's not a lot going on here . A slightly bitter finish.(the bitter finish is good though)

Overall this was disappointing. I have long been a fan of Oktoberfest beers but other then the look this didn't have a lot going for it.

This was from a 3 month Christmas gift of "the beer of month club" Why on earth was the February beer a Marzen ,brewed in march for Oktoberfest the year before ??!! If I ever get a chance to sample this beer when it is supposed to be sampled I might amend this review...

Reviewed by DrMullet from Florida

Rated by BigRizz62 from Maryland

3.8/5  rDev 0%
Autumn orange in color with a slight chill haze. Poured with a short off-white foam that quickly reduced to a wispy cap. Aromas are very subtle:toasted and caramel malt with earthy grassy and herbal hop notes. Medium bodied with aggressive, crisp, tangy carbonation through the middle. Toasted malt flavor up front. Herbal hop flavors through the middle to the end. Finished clean and dry. Overall, a little short on the maltiness expected in a marzen. Nevertheless, a very easy drinking lager.
Sep 02, 2014
Rated: 3.72 by misternebbie from Pennsylvania

Appearance – The beer pours a nice deep reddish amber color with a two finger head of billowy white foam. The head has a lighter level of retention, fading rather quickly to leave some light levels of foamy island lace on the sides of the glass.

Smell – The aroma is sweet and malty with tons of caramel and doughy smells. Along with the caramel are other sweet smells with lots of toffee and some brown sugar. Other aromas of a light earthy and grassy nature are there as well, but these are quite light, with the overall smell being rather sweet.

Taste – The taste begins with a caramel flavor mixed with a rather decent sum of a lightly toasted bready taste. Toffee flavors are present upfront as well, but these seem to fade as the taste advances. Like the toffee, the roast seems to fade a bit as well, being replaced by flavors that are a bit more biscuit like in nature. While these transitions occur some light hop flavors of an earthy and grassy flavor also come to the tongue. The caramel surges a bit at the end, with the other flavors mellowing a little bit, to leave a moderately sweet and malty Marzen flavor to linger on the tongue.

Mouthfeel – The body of the beer is on the average, to maybe just above average, side in terms of its thickness and creaminess with a carbonation level that is on the lower side. The lower carbonation is quite nice for the sweet and bready/biscuit flavors of the brew, while the average to slightly thicker body also upholds the malty and sweet nicely, but all the while do not take away from the drinkability of the brew. Overall, the mouthfeel is rather nice.

Overall – While not super extraordinary, this is a rather tasty Marzen. Very easy drinking, affordable and tasty. This brew actually seems like a better football weather brew to me as it is sweet, malty but not too big on abv. A nice one to try.