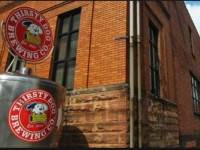 Notes: The tap room will be open from 4-8 p.m. Wednesday through Friday and 2-6 p.m. on Saturdays.
BEER STATS

You feel like you’re right in the middle of the action here. The bar is right by everything going on in the brewery. All the beers on tap were things you can get from them at the supermarket. I was hoping for a few surprises. They’ve recently opened a new tasting room, hopefully with more exciting offerings.

This is the taproom at the Thirsty Dog Brewing facility. It is dog friendly, which is cool and theme appropriate. They do have most of their packaged beers on tap, and a few taproom only offerings. It is a neat factory space with attentive staff and and good beer.

Note: this review is of the production facility taproom, not the newer tasting room up the street)
Parking looks like it could be an issue at a busy time, and finding your way to the tasting room bar, though well marked, did give us a little pause as we seemed to go through production areas.

The bar looks like it could hold 20 or so people with a few extra tables around. You are pretty much in the middle of the brewery and barrel rooms, as I saw it. As such, it had a bit of a production room feel, like an after thought.

The brewery had on tap a decent selection of lighter and pale beers, combined with their stronger stuff, as well as barrel aged and sour offerings. The paler beers were ok, the bigger beers were better. Sours and BA stuff was hit and miss.

Service was adequate, on the ball and distracted at different times. The cash only policy is a tad strange.

Overall it seemed like a place to try out their beers and buy any you found - definitely a tasting room versus a taproom, if that makes sense. You can grab a couple pints, for sure, but it's not really too much of a meeting place.

Great small bar vibe that was not very busy. you are actually have walk past the brewery into the warehouse (watch out for the passing forklift). They also offer cheap ($1) samples.

This is a brewery experience so low level it's almost from a currently employed brewer's perspective. Walk through the fermenters, smell that stinky feet aroma, and, if you walked down the correct hallway, plop up to a sticky bar stool and seal your forearm to the bar-top and let the taps start flowing nothing but Thirsty Dog brews.

On top of all that, bring your own food if you so desire, and even your own, living, breathing, barking, begging, smiling, drooling dog.

Even though you can always find a bottle locally, they don't always have their year-round beers on tap here. Some days you won't be able to get a Leghumper, and others Whippet Wheat will be mysteriously missing. But at the same time, you'll see other offerings, like an "accidentally" soured Christmas ale or porter, a really hardcore new Belgian ale, or another experimental hop-forward IPA.

Hands-down the best brewery experience I have had to date. First, when you walk in the door you are right directly next to their brewing tanks. Then you walk down a short hallway to the taproom, and its located inside one of the barrel storage areas. All of this located in an old warehouse. It smells of a brewery like one should, with the ambiance of being right inside. Forklifts with grain beep in reverse as they haul a load by your table. I only wish I could rate them higher than a 5 for the "Vibe" category.

I felt a person would not have to inquire about a tour of this facility, as just being there is a tour itself. You can walk into barrel rooms, look around a little bit, and everyone is happy about it. This place doesn't have the uppity stuck-up (excuse me Sir, only VIP people can go in there) blah blah that a lot of breweries like to throw around. It was a welcoming experience, the opposite of many other breweries I've been to (including another one about 10-15 miles away).

Of course the beer is mediocre, but I was delighted to see 3 or 4 different barrel aged options on the chalkboard when I walked in, knowing instantly that they were trying to do cool things here.

The bartender purposely attempted to over-charge us, and it was so rehearsed you could tell she does this regularily and throws the extra in her tip jar.... However, she was so friendly and polite when I pointed it out (part of the game), that I won't hold it against them.

If you are in the area-- this is THE ONLY brewery worth a stop!

If aesthetics are your thing, this is not the place to go. If you want to be in the middle of an awesome historical production brewery, this IS the place to go. You won't find food, but the variation of beer was enough to make this my favorite stop on a recent brewery sweep thru NE Ohio area. They had about 16-20 taps of their own beers and everything I tried was quite good. There are tons of barrels lining the walls as well. Very cool brewery. Like other said, cash only, which is a little weird... oh, well.

Stopped here on my way thru Akron to Cleveland. Any interesting place to visit with the tasting room set up in the middle of the brewery. There is not much parking around the building and I thought I was at the wrong place at first. I stopped on a Wednesday night so there wasn't many other people there, but it's not a very big space so seating could be limited on a busier night. They had a decent selection on tap and in bottle to go. They also only take cash here, so come prepared. Worth stopping by at and only a little bit away from Hoppin Frog.

Cool little brewery been there twice will definitely be back again with my growler.

Went here on a brewary tour. They knocked it out if the park. Treated us like we were family. If your in the neighborhood hit em up. Ps cash only

Not much parking. Good selection of beers on tap (only Thirsty Dog). A little pricey. Decent tour for free. Bottom line, a must stop for beer lovers big on hitting up breweries. Only 15 minutes from Hoppin' Frog. Hit them both up on a Saturday afternoon (neither is open on Sunday).