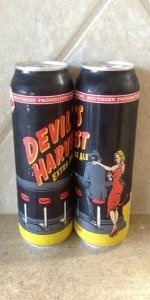 Extra Pale Ale. Great beer.
Appearance was what you'd expect from an extra pale ale. Orangey in color, slightly hazy, pours easy and leaves a nice head. Quintessential Extra Pale Ale.
The nose on this beer is a fine one. You really can't appreciate it from the can. Tulip glasses are perfect to bring out the hop aroma. There is almost a fruitiness in the smell, followed by rich hops but almost in a subtle way. Swirl your glass an extra time, you'll get it.
Beautiful hop characteristics come through in the first taste. On the fore-tongue the hops mix well with an almost perfect carbonation. Slight bitterness rounds off the later tongue as an extra pale ale should. Goes down easy.
Mouthfeel is medium well brewed for easy drinking. But those hops, still boiling around in my mouth after the initial taste starts pushing outwardly, awaiting the next taste. The sidewalls of your mouth totally get what's coming to them. What a beautiful Extra Pale Ale.
This beer is totally worth the taste or extended visit. So is the brewery.
In the can - it's really about the same. Very consistent beer throughout. It really is a beautiful beer in appearance and taste. We keep some at our home in the can all the time.

And the cans are sexy.

Had fresh in a tall Boy

Let me 1st say the can is just terrific!
Artwork that is on point! Well done!

Beer is really outstanding, especially for a new brewery and initial offering.

Overall I'll sum it up:

I'll be drinking plenty of this!

Poured into a pint glass at the Bulldog

A: Opaque amber/gold (almost exact color of the Suzy B) with a white one finger head that slowly dissipates. Curtain-ly lacing.

S: Hops shine through with a grapefuity vengeance.

T: Hoppy grapefruit up front with a mild sweetness and subtle malt presense. Let it warm for about ten minutes and the bitterness smooths out tremendously. Very even taste of malts/hops at that point.

O: Another winner from Hattiesburg. Hopheads will love this one cold. Malt lovers will appreciate it after some warming. Curious to see how it translates to cans.