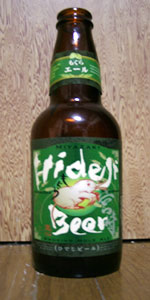 The town I live in is very small but it is about an hour and a half by car from where this beer is brewed. I am usually drinking the "typical" Japanese beer (Sapporo, Kirin, Asahi, etc.) and feel when I drink Hideji, it's a treat.

The Smoking Mole Ale has a slightly smokey smell, but also a hint of hops. The taste is a little hoppy with a smokey aftertaste. It is a little tart but mostly ends smokey/fruity. When drinking this beer from the bottle, it isn't so bubbly but kind of fizzles on your tongue while swallowing. It has a nice color and is quite drinkable (especially if you want to escape commercial beer in the country).

I think it is a great beer and worth a try. Hideji is one of the better micro-brew I've tried in Japan. I'm happy to have it nearby.

My first solo review, yeah! This one was purchased at the Isetan department store in Shinjuku, Tokyo, with a best before date of April 1st, 2006. Alcohol by weight reads 5.0% on the label.

This one was full of surprises, both good and bad. It poured out with a nice, gushing sound, pleasant golden color that really shimmered a nice orange in the light. The head was a bit small, dissolving into a murky film on top with visible sediments.

The aroma was half expected, half unexpected. Rauchbier smokiness is definitely present, smelling of smoked meat/wood chips, but also containing a faint fruity citrus character. Not bad, but slightly weak in tone.

The taste was dominately tart and sour, with the fruity citrus character really coming to the surface. The finish is slightly smoky, leaving its presence in the aftertaste, but maybe this beer is caught in a bit of an identity crisis. The taste was mainly of lemon, some orange, with a small hop presence that tingles the tongue in the aftertaste. It surprisingly held a medium body, much heavier than expected, perhaps due to its smoky character.

This is not a bad offering from Hideji. I'm not well experienced with the Rauchbier style, but the smoky character/presence is much more evident in the aroma, mouthfeel, and aftertaste. Initial taste is dominated by the citrus character. Enjoyable, and a different change of pace for me. Worth a try if you have access to Japanese crafts.

Smoking Mole Ale from Hideji Beer
Beer rating: 3.83 out of 5 with 2 ratings