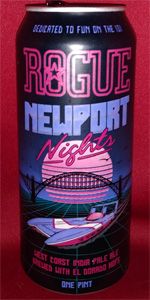 Smells like the alcohol is gassing off. I like IPAs but I have to admit this doesn’t particularly stick out for me. Not exceptional. Almost a flavor of sprouted grains. Caramel malt base.

Appearance - Pours semi-clear and orange in color with an off-white, finger width head. Decent retention before dying to a thin, consistent layer of suds on across the top. A few small patches and spots make the lacing.

Smell - Sweet and slightly boozy, with some earthy and floral hoppiness.

Mouthfeel - Medium-to-full in body with fair carbonation. A hint of syrupy texture.

Overall - It's better than I thought it was gonna be, considering the El Dorado hops are featured (single hop?). A bit heavy, but at 9.8% not entirely unexpected. That said, I probably wouldn't buy it again.

Notes via stream of consciousness: A full head of fluffy off-white foam has risen up above a hazy golden-orange body. It's malty with a biscuity note, some papaya and melon, a hint of spiciness, and some soft pine. It's OK, but to be honest I was expecting more from the hops. The label lists it as a "west coast India pale ale" but at 9.8% ABV it's really more of a double IPA, and with that comes the extra malt that's fighting against what hops are there. Whatever. On to the taste... it's malty as expected, bready and biscuity, and drizzled with fruitiness that reminds me of orange marmalade, papaya, mango, and some kind of melon. As noted, it's really more of a double IPA than a west coast IPA even if it does have the 60 IBUs listed on the label. It's malty, and it doesn't seem that bitter. I'll also admit that I fell for the labeling and bought this because it lists the hops as simply El Dorado, although I'm not really finding that. Yeah, it's got that "tropical" thing but it's not as sharp and focused as I'd imagine it would be given that it's a single hop beer brewed with El Dorado. Ahhh, maybe I'm wrong about that, but I'm certainly not wrong the it comes off more like a double IPA than a west coast IPA. It doesn't really even finish dry, there's a lot of residual sweet malt there, and I'm expecting a punch from a west coast IPA. As it warms a bit I'm even getting some of the alcohol in the aroma, as well as the taste, and yet that's still not really helping to dry it out completely in the finish. In the mouth it's medium to medium-full in body and gently crisp. The head held up well and it left some nice lacing behind. Ehhh, this is an OK beer overall, decent enough as an IPA and probably better than that if reviewed as a double IPA, and perhaps even better than that if you just look at it completely hedonistically ~ meaning someone handed you a glass of it without saying anything about it and you either enjoy it or you don't. I'll personally treat this more as a kind of strong and malty beer (think barleywine, dessert beer, eisbock, etc.) than an IPA, and enjoy it after dinner as something to sip at while watching an action-adventure flick or reading before bed.
Review #6,996

Appearance: rich golden hue with a thick finger of frothy ivory foam atop. The body has a little bit of haze, which isn't too bad.

Smell: dank and earthy hops with a sweet malt background. Not super complex, but not bad.

Taste: dank and almost minty character from the hops; bitterness is moderate. The character isn't bad, but it's just ... weird. I don't think I've had hops quite this minty before.

Mouthfeel: medium body with a good carbonation and really a pretty good creaminess.

Overall: I don't know if it's the beer's age, but for whatever reason the hops in this thing are kind of weird. Not a badly-made beer; just kinda weird.

Tasted in a Spiegelau IPA glass from a 12 fl oz can on January 29, 2020. An Imperial West Coast IPA brewed with El Dorado hops. There's nothing quite like a night out in Newport....from the craft beer and the freshest seafood to the bonfires on the beach, this one's dedicated to Newport and unforgettable nights having fun on the 101. The beer opens with aromas of mango, papaya and tangerine followed by an atom bomb of pine and grapefruit notes that ultimately settle into a surprisingly smooth finish.

16 oz can poured into a tulip pint.

Overall
Musky, earthy, and non too complex. With that said, well hidden abv with a smooth and creamy texture. Party on!

Everything just screams mango and papaya with a hint of citrus, including grapefruit and SLIGHT key lime. There are no “surprises” in this besides the full bodied, creamy mouthfeel with perfectly balanced hops. Alcohol really well hidden from the pallet in this heavy hitter. Truly perfect!

5 oz pour on tap. An above average old-school DIPA. Aromas and flavors of caramel malt, citrus, and a bit of dank earthiness. Mouthfeel is full and creamy and hides the 9.8% abv very well.