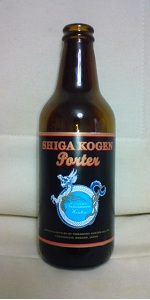 Draft pulled into a tulip glass. Appearance is standard for a porter or stout - jet black with a thin layer of tan froth - it didn't look too promising in terms of carbonation, but it is there, somehow!. Aromas are quite subtle, roasted malts and coffee mainly, but barely there. Taste is more prominently coffee, chocolates and roasted malts - coffee dominant, but there is a nice balance amongst the three at the end of the day. Carbonation is average, it doesn't show up much in the froth, but it does make a brew feel much creamier and medium bodied in the mouth. Finish is dry, like an Irish stout. Seems to be a decent effort at a well balanced porter, not overly complex, but enough layers to make it an interesting drink.

Bottle bought in Japan, poured into a pint glass.

A: Dark brown with slight light penetrance, hints of amber. Head that stuck around.

T: Starts with dark fruits, middle is bitter chocolate and hops, and finishes with a nice creamy bitter note. Simple but refreshing.

O: A very drinkable porter. The dark fruits in the nose are great and the bitter chocolate finish was enjoyable!

A. Pours with no head, and hence no retention. Dark to black, red against light.

T. Tastes OK, but the use of the roast Barley overpowers anything else this beer could have. Slight coffee note at a push.

M. Nothing impressive, very lo carbonation, as with all the Shiga Kogen I've had.

O. Not a great beer, but not so bad either. Relatively drinkable, but really could be better. As a personal note, I would put this in line with a contemporary stout rather than a porter. Also, recently I saw this written "Shiga Kogen mostly brews traditional British style ales with distinct taste and superior quality", Being from England now living in Japan, my opinion is quite the opposite. Their beers are not British in my opinion, and unfortunately are not "superior quality. I guess this is what comes of a Saki maker delving into Beer. Don't be put off though, they are worth a try, the pale ale being the strongest contender imho.

A - A quickly receding light beige head. That leave nice sheaths of sandy lacing along the side of the glass. Color is of dark hot chocolate. Clear and a bit thin, but brown. Continued carbonation wasn't there.

T - Tiny big nibbles of chocolate tones and pale malt. Aftertaste was a bit vinegary. Was hoping for more.

M - A bit loose. Some creaminess but ultimately too watery. Like the last poor from a keg.

D - Easy to drink but for the price it's unimpressive. I'm happy to see them trying some different styles but as their main dark beer it's not as good as you could hope for.

Shiga Kogen Porter from Tamamura Honten
Beer rating: 83 out of 100 with 11 ratings