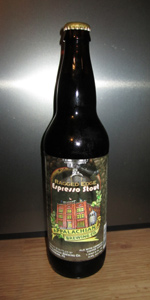 Poured completely black with a brown head which left a nice brown ring around the glass and small amount of lace.

Smell to me just like coffee of course. Coffee is definitely the star of this aromatics brew.

Taste was of course like coffee I got a hint of chocolate and roasted barley. It is very good. Exactly what I would expect. Good coffee flavored. Medium bodied.

Overall I highly enjoyed this beer. Will have again. It's a beer for stay awake.

Bottle split with my wife, it happens.

Beer is black with a nice brown head of small bubbles, some lacing, moderate retention.

Beer is mildly bitter from the roast, a bit too much roast and not quite enough coffee, it is a decent stout but nothing special and the balance could be better. I won't repeat this.

Enjoyed this bomber bottle out of a large snifter glass.

A: Pours a black hue with a thin, tan head that quickly dissipates down the side of the glass leaving no trail and ending in a solid persistent lace.

A: Dark brown pour with a big dense light brown head. Fades at a medium pace, leaving decent streaks of lacing left behind.

S: Pretty much pure roasted coffee bean. Can't even get a whiff of anything else. Maybe the slightest suggestion of chocolate?

T: Coffee and lots of it. A bit sweet and creamy too which helps offset it. A hint of chocolate again. Surprisingly strong flavor given the lower ABV.

O: Like drinking watered down and carbonated cold coffee for the most part. Definitely a must-have for the coffee lover. Don't let the scores dissuade you, it's not bad, just a pretty simple and one-dimensional brew. Almost no roasted malt or hops or anything of the sort. However, it was still tasty.

Pours a dark brown/black with ruby highlights at the edge of the glass, only when held up to light. Limited coffee coloured head doesn't yield much lacing, but still a visually pleasant pint.

Aroma is predominantly coffee, as is the taste. Lacking the roasted bean tastes of many stouts - tastes like brewed coffee rather than roasted. Caramelized malt sweetness is present in the aroma, but a bit overwhelmed in the taste. Likewise the bitter finish strikes me as distinctly coffee-based rather than bittering hops.

A ton of flavour for 4.6% ABV and a well crafted stout I'd recommend to any espresso lover. Will definitely seek out other Appalachian Brewing Company beers.

Live minutes from the brewery, but have never seen this around... Picked it up on a recent swing though Maryland... Odd...

A - A tad more than a finger's worth of slightly creamy slightly fizzy khaki colored head... Minimal retention gives way to a full slightly thick even lacing... The color is a medium to dark brown with a slight haziness that permeates... A bit murky as well... Mostly still with a few stray carbonation bubbles sticking to the sides of the glass...

S - The espresso is at the forefront - it is strong, but never overpowering... Some slight roasted malt character... Hints of cocoa... Solid aroma...

T - Unfortunately the espresso takes a distant back seat and is replaced by an over abundance of roasted malts... Not terrible, but the flavor would be much more spot on for a porter, not a stout with espresso added...

M - On the lighter side of medium bodied... A bit thin... Limited carbonation that is a bit prickly... A slightly burnt texture... The finish is a bit chalky...

D - A respectable beer, but one that misses the mark for me... Other than an above average aroma, this one is rather pedestrian in all facets... It's not a bad beer, but in terms of style guidelines and the under delivery in terms of espresso flavor, this one is average at best... There is some good flavor given the sub 5% ABV, but that is over shadowed by the other shortcomings... Sorry Appalachian...

Bomber bottle to a tulip.

A: For a 4.6% stout, this one pours out quite dark. Suppose the espresso adds a bit of darkness. Head is almost creamy with a nice tan color. Definitely looks like a bigger stout than it is.

S: Big hit of coffee/espresso with some chocolate malt. It's roasty and bitter but it has almost a porter twang to it. Not too much depth going on here. Heavy coffee beer for perhaps someone looking to break into coffee beers.

T: A bit less coffee aggressive on the palate, but the same roasty bitterness comes through. Loss for words with how to explain the twang mentioned before, but it comes through in taste as well. A taste I only get from adjunct beers.

M: Wouldn't say thin, but it's certainly not robust. I keep thinking of an old, English porter. Seems to have fallen off a bit, although there is no mention of bottling date on the bottle. Shame, shame.

O: Was most impressed by the appearance and aroma of this beer, everything else left me wanting more. I think if ABC tweaked this one and beefed it up a bit, these issues would be resolved.

A - The beer was served with a pitch black body that had a thin, one finger, brown head...the retention was not that great as it quickly fell into a wispy cap...lacing was left towards the top

T - This brew is very roasted from start to finish...it's a little sweeter up front with more roasted malt characteristics and with the touch of vanilla...the middle and end become bitter from the roasted coffee beans and it tastes like a cold cup of joe...the finish again is bitter and there is actually some hoppy notes lingering

M - Medium bodied...this one is a little thin towards the end...nice roastiness and bitterness

D - Yet another coffee stout from ABC...this one was a bit different than last years version and it has now become a seasonal...I liked last years a little better...this one had a good scent but the flavors were a little one dimensional and could have used some more power

Adding this brew as a new beer even though ABC has/had at least 2 other coffee/espresso stouts. However, this one was added as the new annual January brew with espresso made at Ragged Edge in Gettysburg instead of Cornerstone in Camp Hill.

Review from notes taken on 1/14/11 at the Harrisburg location. Served in an oversized mug this brew appears black in color with a finger of dark brown head that quickly dissolves leaving a wall of lacework clinging to the glass.

The aroma is fresh espresso mixed with dark roasty malt which imparts a burnt character to the nose that mixes with some citrus hops and an overall light smokey feel.

The taste is quite roasty with a burnt/charred malt flavoring that imparts a pleasant bitterness. It has a lasting fresh coffee taste and a mild chocolate sweetness. There is a slight mineral/earthy flavor that increases as the brew warms.

Medium bodied with a light amount of carbonation. A decent coffee stout that is not much different from their previous coffee stout offerings. The alcohol is fairly well hidden.

This small batch beer was produced in Harrisburg and our brewers had sore hands from pushing out gallons of espresso. It boasts an intense roast flavor from a blend of roasted barley, chocolate malt, and espresso roast coffee. This caffeinated brew is easy going down, but it might just hop you up!"