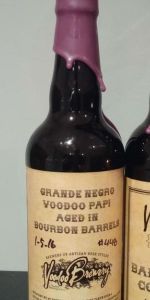 Had on tap. So excited to be able to try this, and simultaneously did and did not live up to the hype. Viscous black oil pour, no head save a thin brown ring. Bourbon, coconut, peppers, cinnamon, to a lesser degree cardamom, bake into the chocolate and vanilla base with maple in the nose. Taste does most the same but the bourbon and wood are thrown into the back seat, finishes chewy and drier. This is where the hype conversation comes in. Is it a great beer? Yes. Hype met, however is it better than other elite representations of this style? No, hype not met. Seen most in the feel where it has great spice, smooth malts and gooey adjuncts textures, but the barrel is not super assertive, want more mass but love the dry chewy nature. An experience worth having

Lots of good things happening here, my only issue was that this beer is that I thought the chili peppers were a bit over powering. I'm not a huge fan of chilis in beer to begin with, but I've had a few that balanced it well...this one over did it. On the plus side though, you do get lots of vanilla, chocolate, cinnamon, and a nice medium to full body.

This had wonderful pepper, bourbon, dark chocolate, some tobacco up front; nice spice immediately on the palate, plus plum, cacao; great body, with spice, bourbon lingering!

Look: very cola like with a khaki head that dies fast
Smell: maple syrup dominated with vanilla and a finish of chilli peppers and bourbon.
Taste: big chilli front fallowed by an amazing blend of vanilla and chocolate with chilli... finished with a maple syrup bourbon.
Feel: a nice chili burn, medium carbonation, medium light body and really easy to drink.

Overall this is better than double barrel huna... perfectly blended

Motor oil black with brown edges and nary a wisp of head to speak of.

GNVP has a fruity ghost pepper sting in both the nose and taste, with a thin feel that does not bring a lot of barrel or other expected flavors, but some dark chocolate and dark fruit notes do come forward. A hot pepper sting scratches the throat after the swallow, much like Mexican Cake, buffered by a thick carbonation and cut off by a dry, chewy finish.

This is okay, but...I feel like I've been raped at this point, and not by the heat, but by the overwhelming hype people pumped this beer up to beer, only for it to be less enjoyable than numerous annual shelfies I can think of right off the top of my head.

Batch 3 poured into a tulip. Dark in color, slightly transparent in the pour. Small mocha head that dissipates quick. Nose is all cinnamon and spice. Flavor is very much like the nose. Cinnamon is prevalent with hints of cocoa and some pepper spice to finish. Really tasty. Fee is where this fell short. On the thin side. Wanted this to be more full bodied and mouth coating. Overall, great beer. Just wish it was thicker.

This one pours a fairly dark black, with a small head, and not much lacing.

I definitely wish there was a bit more maple, as this is definitely more peppery than I expected. It's not even spicy, so to say- it's just actually peppery in the a vegetable way. Alongside the pepper juice, you get some nice barrel-ish coconut, lots of dark chocolate, a bit of oaken spice, light bourbon

The apple brandy version of this beer is much, much better- but this is definitely not a beer I'd knock out of bed. It's quite peppery, but not actually that spicy. I with there was more maple syrup or vanilla, as they seem more faint than the apple brandy version. This is surprising, as the apple brandy version stil had those vibrant flavors even two years after release, and this current version is very fresh. I feel like I'm railing against this- and that's not fair- it's definitely taste. There's a killer chocolate malt flavor, and some nice spicy deep oak character coming through. I just definitely expect more out of this brewery for this sort of thing. It's still one of the better BA stouts you could have, just not the best.

This is medium bodied, fairly creamy, with a normal level of carbonation for the style.

This is quite tasty, but not to most upper of tiers when it comes to Voodoo's barrel program.

Reviewed the batch aged in 4 Roses
L: Pours a lustrous dark brown with a thin sandy head
S: Gorgeous nose - picking up a bit of barrel, cacao nibs, and cinnamon
T: Follows the nose but picked up a bit of maple and vanilla sweetness - nicely done
F: A touch thin, but moderately viscous with ample carb
O: The flavor profile of this beer is spot on with a nice touch of maple, heat, and sweetness. The only downfall of this beer was the mouthfeel for me - just a bit on the thinner side for a big BA stout. Otherwise very enjoyable.

L: pours see through black, with a film of head
S: mild aroma with the cinnamon most notably.
T: starts with chocolate and cinnamon then the peppers and cinnamon dominate through the finish. Overall this is slightly bitter and missing the rich fudge notes
F: this is thinner than I expected with the chilies warm my throat a lips

What a score for my 1000th review. I was at 999 yesterday and debating what to drink for my big review. Well it just happens I got off work and voodoo announced this release 10 minutes later. Hauled ass 1.5 hrs north to Meadville and scored it and some bottles.

T - Heavy cinnamon up front, loads of sweetness early on. Slight bitter bakers chocolate behind it. TONS of pepper heat from midway through all the way to the finish and even lingers after.

Overall great. Love the pepper heat it carries throughout

Batch 2. From bottle into snifter.

Pours pitch black with almost no foam at all upon pour. No foam present during the drinking. A lot of things going on here. Initially getting a lot of 'fudgy' aromas: cocoa nibs, vanilla, brownie. Taste definitely follows the nose but adds the right amount of pepper, spice kick at the end. As it warmed, the cinnamon came out to play but not in an overwhelming fashion. The bourbon note though is really present! Loved that about this beer. Mouthfeel was medium-thick.

This beer is deserving of its rating and Voodoo has yet again nailed another monster BA imperial stout.

This was AMAZING! tons of chocolate and bourbon barrel notes here! Sad that I traded off my earlier AB version before trying it....as this one was other-worldly!!! Hope to track this down again at some point!

On tap. Black color, no head. Aroma has sweet, spicy chocolate, peppers and coconut. Taste has peppers with medium to high chili heat, cinnamon and some bourbon in the background. Medium body and carbonation.

22oz bomber from batch#2 poured into a Spoonwood Brewing snifter:

Smell: Strong notes of maple right off the bat followed by some bourbon and vanilla! Aroma is amazing!

Taste: All kinds of crazy good going on! Notes of maple, vanilla, and cinnamon very present! Serrano Chile Pepper heat pops in at the end and is very noticeable! Nice barrel notes rounds this thing out and makes this the perfect beer!

Feel: Medium to heavy bodied! Wish this was a touch thicker is about my only complaint.

Overall: Hands down the best beer I have ever had to date! This is crazy good! Soo many different things going on in this beer! If you can find a bottle of this in a trade I suggest you pick this up! Hope they brew this one again in the next barrel release!

Look-dark chocolate milk, a little lacing and nice tan head
Smell-cinnamon, chocolate and vanilla really burst
Taste-cinnamon, chocolate, peppers come through nicely with a little kick, and the vanilla all balances out well. I didn't get a ton of barrel but the combo was very tasty
Feel-thin, not sticky at all
Overall-a fantastic beer with incredible flavors

Just about a perfect beer. I know there's a ton of hype with this one, but damn I still didn't expect it to be as amazingly rich as it was. Super thick and I found it to be very cinnamon forward, which is always a huge plus in my book. One of the best beers I've had all year.

Wow, very amazing. Deep dark brown look. Has a great molasses smell and taste. A little spice mixed in with a vanilla cinnamon bomb. The spice was really different and tasted great.

2016 Vintage - a nice mix of cinnamon, vanilla and maple on the nose. Taste was heavy on the heat from the Serrano - I expect this to be drinking great after another few months.

Pours a deep brown molasses colored body on the pour, once it's in the glass it's pretty pitch black with cherry highlights. Head is mocha brown, two finger with an aggressive pour, reduces pretty quickly to leave a ring of brown foam and no lacing.

Aromas.. LET'S TALK ABOUT AROMAS! This is one of the best beers I've ever smelled and one of the only ones I've give a 5/5 to in this category.. this is a straight up maple and vanilla bomb on the nose, and not artificial aunt Jemima or vanilla extract, I'm talking rich maple candy and vanilla cookies straight out of the oven. A bit of bourbon in there and chocolate as well. Wow that smells awesome.

On the tongue is a roller coaster of flavors.. upfront is sweet french vanilla and bourbon, followed by rich maple syrup, milk chocolate, and caramel. The follow through bring on the heat from the peppers which lingers for a while. The finish is roasty and charred. Mouthfeel is a bit thin, as most people have commented, but this surprisingly doesn't take away from the beer as a whole. A moderate amount of booze on the tongue.

Overall, I was blown away by this beer! So amazingly complex and delicious, all the flavors work together. I'd love to get another one.

T: Fantastic sweet chocolate notes dominate the first wave of flavor, followed by a swarm of cinnamon and chili pepper flavor that finishes with a nicely rounded bourbon punch.

F: Thinner than expected. A fuller body would make this beer amazing.

O: A very nice offering from Voodoo. Certainly not worth the hype or the current trade value it commands (as regularly available beers in a similar style like Abraxas and Hunahpu's taste better) but certainly worth trying once.

Second bottling released today (8-22-16) aged an extra 7 months in the barrel. Really get the maple and barrel in the nose, not so much the chilli pepper. Initial taste follows the nose with moderate alcohol/pepper warming in the finish. A little bit thin but all in all fantastic beer. Had on draft at the source in meadville

Really nice Voodoo beer. Pours a little thinner then what I expected and the feel followed suit. The taste and barrel was very nice though...rich and smooth. Better as it warmed.