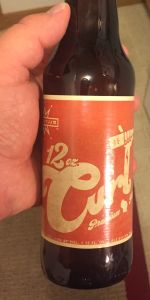 Notes: Clean, crisp, smooth, and supremely drinkable like a Pilsner oughta be.
View: Beers | Place Reviews
Reviews: 8 | Ratings: 30 | Log in to view all ratings and sort

Decanted from a 12 oz (355 ml) bottle into a conical pint glass; no production information.
A: Pours a slightly hazy, straw color with a no more than half inch, white head with low retention and limited lacing
S: Aromas largely on the grain and grassy side with white pepper and MacIntosh apple notes.
T: Light sweetness with a strong grainy flavor and notes consistent with the nose. Bitterness nicely balanced with the modest bitterness. Very refreshing.
M: Light bodied with low effervescence. Maybe a little astringent.
O: Drinkable and enjoyable overall.

Straw yellow with a white head. Doughy aroma, but I think there's a slight hint of DMS. Only worth noting for judging, it still smells lovely. Light esters, nutty malt with a hint of toast crust and then mild spicy hop. Crisp, not boring, and quite refreshing. I'd order another.

Pours a pale yellow with a residing white head. Smell is corny and biscuity malt. Taste is similar. Strong corn aftertaste. Like liquified corn on the cob. Mouthfeel is light. Overall it's okay.

i like how many craft pils types we are starting to see, it seems like they are coming from everywhere now, and its a nice trend to have lighter offerings among the huge and interesting beers everyone is making, well made lighter beer is a treat. this one tastes pretty classic to me, very light on the grain in terms of both flavor and body, but its crackery and fresh. i taste the lager yeast, which is european and traditional, and has dried this beer out really nicely. exactly how its supposed to be. this one is a little hoppier than most of the imports, but its not real bitter or anything, just sort of springy and floral, a nice touch that i think adds a needed little something with the malt flavor being so light. its dry and its crisp, super refreshing when ice cold, and carbonated really aggressively, which i prefer in this style. the bubbles are big and make it sort of feel like a beer soda, very lively and excited. an easy beer to drink a ton of, nothing too outside the box, but well made and right on for this time of year.

Poured 12oz bottle into a Pils glass. Hazy straw yellow color with a 1 finger white head. Streams of bubbles rise to meet the thin cap. Good lines of lacing on the glass. A nice grainy and yeasty aroma with some straw and mild spicy hops. Cracker like malts are also present. Clean bready malts with some straw and grain. The hops give it slight fruitiness to give it some depth. Light bodied, yet creamy and crisp. A nice solid German stylee Pils.