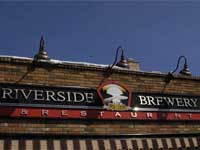 Was in town on business and this became my first stop on a five brewery tour of the Milwaukee and north of area. Located in a quaint downtown area. Sat at the cozy bar area and chatted up some friendly locals. Had the flight which included two seasonals - ESB and a spiced pumpkin (not much spice). Also had a light/honey, hefe, fruit hefe, irish stout, amber (if memory serves me correct).

All the beers were well done. They didn't have anything bitter/hoppy which is a bit of a drawback.
Not a beer-geek destination but worth the visit if you're in the area.

I live in West Bend and from time to time I go to the local brewpub to get...disappointed. All the beers taste about the same! Very malty with no hop aroma or profile to speak of. Today, I went and tried their IPA and Rye Beer. The IPA tasted like it was burnt during the mash, with no bitterness or citrus IPA-like after taste that I enjoy. The Rye beer tastes like their amber-style beer, which tastes like their Octoberfest-style beer, get the picture all the beers taste very similiar. The only differnces are the stouts and the weiss beers if you like that style of beer. Again I live in West Bend and I will travel down the street to Brazen Head for a good IPA or go to Grafton to the Milwaukee Ale house for a good beer. I hope the local beer enthusiasts can agree that there can be better beer brewed from this establishment.

Found myself in West Bend on business, and was very pleased by all aspects of my Riverside experience.

The beer sampler included five house beers and three seasonals. I was very impressed by the consistent quality among all the beers; usually, when I get a sampler there are a couple of dogs but there were no slackers in the bunch. Really enjoyed the honey ale, weiss, and weiss infused with peach--styles I don't normally care much for.

Seasonals included a very crisp IPA, a coffee stout, and a abbey dubbel--all good, although the abbey dubble was unexpectedly sweet (a tad too sweet, IMHO). The sleeper was the amber ale, with a strong malt flavor--loved it so much I had a pint for dessert.

The food menu is very broad; I had a roasted red pepper bisque that was fantastic, salad, and peppercorn-encrusted filet. The only disappointment was the garlic mashed potatoes, which were a bit dry for my taste.

Great service, hope I find myself in the neigborhood again as I would love to go back.

Sat downstairs at a table near the bar. We were relatively early for dinner (5:30pm) so initially there weren't too many other diners but over the hour we were there it filled up pretty well. Ten or so four top tables with a brick bar for six or eight. Atmosphere is more restaurant than brewpub.

It was Friday so several people at our table got the fish fry. Several options are available, including fried cod, baked cod, perch and shrimp. I had the baked cod with garlic mashed potatoes. The cod was pretty good but the potatoes were a little gluey and not very garlicky.

We tried the hefe, IPA and scotch ale. All were decent, I liked the scotch ale the best of the three.

They don't take dinner reservations if you call after 4pm; I'm not sure if that's everyday or just Fridays.

A very nice multi level facility, with a back view of the river. I had a flight of beers and really liked their Heffeweizen, although I really liked their pumpkin beer I had at a tasting earlier in the year. Across the board the beers were good but not great. I thought the selection was somewhat limited, as it seemed they had other seasonal beers that I would have liked to try. I didn't try the food, and the prices were reasonable. I stopped earlier in the day, so as far as parking goes I don't know if it is more difficult later on. Considering the volume of other places I haven't visited, it probably won't go here again, but was worth a first visit.

I'll skip the part about taking an hour to find the place because it doesn't actually relate to the place itself. Regardless, it was incredibly frustrating.

The building is located right on the river (or so they say). I didn't actually see one behind it although I wasn't looking, and there was no view from the back of the building. When you entered you were provided with 3 views. Just to the 2 O'Clock was the brewing equipment, rather modest but clean and efficient in appearance standing proud behind a glass wall. Straight ahead was a dark hall way and to the immediate left was the bar and seating area. Once inside the bar area, the whole front side was windows facing the street with high tables surrounding a U-shaped bar. A stair set led down to a dining area that I didn't visit.

All of the furniture and railings were adorned in dark, reddish wood while the floor was a combination of light wood and rough tile. The walls were also a combination, this time of flat red and tan paint and exposed brick. The bar top was a speckled marble and everything was kept pretty clean. Nicks and dings could be seen from here to there but it was definitely because I was looking for it.

The bar featured 10 taps: One empty one that I would later find out had the "signature beer" "Main Street Amber Ale". Why is the signature beer not available? The other 9 taps featured 8 house beers and 1 guest. The guest was Sprecher IPA2. The bottle selection (a handful of staple domestics) was weak and really the only thing besides lack of a good hoppy beer bringing the selection down.

The quality of the beer was great though! All fresh and available (besides the one Amber). I did not try the food but the only other gentleman in the bar area commented on enjoying the hamburger he had.

Probably the most shining part of my visit was the service. From the moment anyone walked in, they were promptly attended to with a good attitude. Upon requesting strange things for the flight of beer I wanted to sample, I realized the man behind the bar was the Brewmaster.

He wasn't hesitant to talk about his beer at all and was both friendly and open about giving advice for homebrewing.

I really enjoyed the experience I had there and will hopefully make it back at the change of seasons for some different brew and food.

Situated right in downtown West Bend, the riverside brewery and restaurant has a perfect location. It provides a pleasant pub atmosphere and could easily be a vibrant local watering hole - although it's prices set its target for a yuppie crowd.

The beer and food quality lands somewhere between average and good. The brews aren't terribly ambitious - aside from one I had made with locally grown hops. That was a nice idea with disappointing results.

I would have liked the place more if it served cuisine a la biere in addition to or instead of a number of dishes prepped with wine. There seems to be a bit of a disconnect there. The Riverside seems to want to be a restaurant before a brewery, and achieves mediocrity on both fronts.

Overall a nice place. The bar area is a great place to hang out and grab a pint. Get the sampler platter of beers to try each one. They also have take home growlers for a decent price ($12).
I've been here a few times in the past 2 months, every visit has been a good one.

My first visit I was able to try their Caramel beer (lager?), it was delicious and reminded me of a Rochefort 10. I went back 3 days later to get a growler of the caramel stuff but it was gone. The bartender explained that it was a "bye-bye batch" for their brewmaster who had recently left the establishment, so they would probably never make it again. Disapointing.

Food is good. I've eaten almost every appetizer on the menu. The crab cakes and fried fungus are worth a try.

I'll be back again soon, I want to try their fish fry next!

A nice brewpub. Some of the house beers ran out early. On one hand that may be a sign of a great beer. Unfortunately, for those who show up later in the evening, this can leave a bad taste. However, I did get to try both the Oktoberfest, which was excellent and the house Porter which won with me by a slight margin. The atmosphere was nice. Live music played in the lower level at a volume and pace that still allowed decent conversation. Overall experience was great. I would definitely stop by for a pint again.