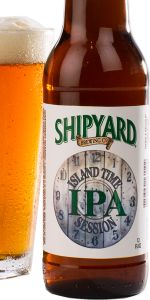 Notes: Shipyard Island Time is an easy drinking session IPA built with a variety of Northwest hops which contribute to the grapefruit and pine nose and spicy hop finish. This refreshing IPA will transport you to your Island Time no matter where you are.
View: More Beers | Place Reviews
Recent ratings and reviews. | Log in to view more ratings + sorting options.
3.34 by tottel from Netherlands on Jul 24, 2021

Poured a dark amber color with a thin head. Smelt of malt and citra hops. A little heavier than a normal session IPA and has a stronger malt profile than many as well. Finishes well.

Shipyard Island Time is called "session IPA" by the brewers. I think a better description would be a solid British style session pale ale. The body is a nice amber, and there is some malt body that is often missing in the modern IPA. The malt is accompanied by a good hop character. The 4.5% alcohol is a good level for those of us who might want to have two or three. This brew is an enjoyable session ale, and would go with a hearty meal as well.

Hazy, quite pale, thin white head; Has a good IPA smell; Not a lot of flavor for an IPA, with just a touch of that characteristic hoppy IPA bitterness; smooth mouthfeel, lightly carbonated. Not bad, certainly better than most mainstream American beers.

Amber orange color with a thin head with good retention.
Aroma with notes of lime, pine extract, tangerine, grass, dough and some medicine.
Flavor with notes of medicine sourness, lemon concentrate, melon and white pepper. Dry and bitter aftertaste. Though, it feels lower than its 38 IBUs.
Light body with appropriate carbonation.
Although this Session IPA has Amarillo, Citra and Simcoe, I could swear it screams Sorachi. Green, spices and lime citrusy flavors predominating. Though it has a slight awkward tartness that may contribute to those notes. Was this a beginning of contamination?

A: Pours a golden amber color with 2 fingers of head that fades down to a decent cap

S: Some light spicy hops along with some citrus and pine. On the lighter side

T: Follows the nose. Starts off with some spicy and piney hops and picks up a light citrus. Yeasty undertones throughout. Finishes with lingering spicy hop

O: A solid session IPA that is super easy to drink and isn't watery

I tried this at the Marriott in Newport, Rhode Island. It poured a clear orangish with white head that is leaving a spotty lace. The scent had some citrus notes. The taste was nicely balanced and easy to drink with citrus presence. The mouthfeel is lighter in body with good carbonation. Overall it's a decent session ipa.

12 oz 2017 can.
Pours with a large foamy head over a hazy amber body.
Fruity and earthy hops dominate the aroma. The flavor is similar and relatively strong for a "session IPA".
Near medium body with medium+ carbonation.

Listen I usually don't give negative reviews I'm the type of guy that likes to share the great beers I've drunken over the years but I gotta warn you to save your dollars on this one. It taste very corporate with a mass produced taste. I understand the alcohol content because it's a session but the beer just lacks anything that I can describe. It a beer I sold barely even put in the ipa class. I'm sorry guys but you gotta do better than this yes it's cheap but I can get Sierra nevada hop bullet dipa for the same price and it's 3 times better.

It is the auspicious occasion of New Beer Sunday (Week 672) & this will mark the opening salvo in a Shipyard B.C. horizontal for/by me today! Even better is the fact that it gives me an opportunity to do a back-to-back/side-by-side bottle vs. CAN review. You might think that I would have a bias towards CANs, but although I have an affinity for CANned beers, I also try to maintain a modicum of integrity & so sometimes, bottles win out. We shall see.

From the bottle: "Session IPA". This is important since it should be its own separate style. It is going to be tough to rate it to style when there are so many great AIPAs out there.

The first step is to Pop! the cap & I prefer to follow this action with a gentle pour, having made doing so my 2017 New Year's resolution. What began as a habit has become a vice, but I am finding it more pleasing than having to clean up a mess. Grr! It turned out to be one of those screwed-up screw-off caps! I had to muster self-control not to take out my frustration with an aggro pour, but I was able to restrain myself. It was just as well as this was a highly carbonated beer that initially filled my glass with eggshell-white foam before beginning to settle down. During the wait, I took note of its Golden-Amber (SRM = >5, < 7) color with NE-quality clarity & greeted The Gelt Gang of Mammon, Midas & Croesus as they appeared for a taste. The nose smelled like freshly-squeezed grapefruit juice & while that was great, it also made me mistrustful of what might come next. So many times, these session AIPAs are aroma-hop driven, but the taste does not follow the nose & I come away unfulfilled & disappointed. It is like a façade with nothing behind it, IMHO. The three-plus fingers of soapy, foamy, rocky, tawny head finally fell away, leaving loads of dense, sticky lacing in its wake. I was ready to drink! Mouthfeel was kind of thin, not exactly watery, but I wasn't impressed. The taste was marginally citrusy, nothing like nose. Boo hoo. It had a grapefruit & lemon bitterness, but it just seemed dialed down/back. The biscuit malt was a nice touch as a sweeter malt would have taken it in the wrong direction. Finish was dry, but I ended up feeling unfulfilled. YMMV.

And now, an entry for The CANQuest (tm)!

From the CAN: "Session IPA". I wish that they were more forthcoming on their labeling ...

At last, a Crack! & Glug, but a gentle one so as to be fair & balanced as I CANtinue to CANduct this CANparison. It was not as active as it had been coming from the bottle, so once it was sufficiently deCANted, an in-glass swirl was in order to raise two-plus fingers of soapy, foamy, rocky, eggshell-white head with moderate retention. Better! I CAN do without drama & waiting when it comes to drinking beer. Nose still had the pronounced grapefruit citrusiness, but now I also got notes of sweet orange. Color was Golden-Amber (SRM = > 5, < 7) with NE-quality clarity, causing The Gelt Gang to come running in from my living room where they were watching television. Mouthfeel was thin-to-medium, not watery, but not much beyond it, either. The taste had that same dialed-down/back flavor of muted citrusiness that just did not live up to its nose. It was not unpleasant, but it just lacked any Ooomph! How CAN I enjoy an AIPA when it just doesn't have any punch? I am a self-described, self-avowed hophead & this just did not do it for me. Finish was dry, pleasant, but not sustaining. One would have been enough, two was plenty.

Final analysis. CAN wins by a hair's breadth!

Picked up from Jim on Turkey Day.
Can BO 06.28.17, stored in his reefer, stored in my reefer at 42 degrees, served at 42 degrees in a hand washed and dried Jester King snifter.
Aroma – Some floral and citrus initially, giving away to malt.
Head – Large (Maximum 5.2 cm, aggressive pour), off white, medium density froth, average retention, diminishing to an irregular four to ten mm frothy ring fed by effervescence and multiple islands in the layer.
Lacing – None.
Body – Dark yellow, opaque, effervescent.
Flavor – Begins with a taste of old orange zest followed by some slightly bitter malt. No alcohol, no diacetyl.
Palate – Light, watery, lively carbonation.
Impression: A not-very-good session IPA, perhaps because it’s old but just as likely because it’s from Shipyard. Ordinarily I enjoy IPAs with a solid malt component but this one just isn’t very good.
Appearance 3.25, Aroma 3.5, Flavor 3, Palate 3.25, Overall 3.

Decanted from a 12 oz (355 ml) bottle into a conical pint glass; bottled on July 13, 2017 (but refrigerated since purchase).
A: Pours a slightly cloudy amber to light copper with a one inch egg shell white head, modest retention, and very strong lacing.
S: Floral. Aromas of canteloupe, papaya, and white pepper mingle with medium roast maltiness.
T: Melon and spice flavors blend nicely with very light bitterness.
M: Light to medium bodied with robust carbonation. Clean finish.
O: Not very fancy, but a nice, drinkable session. Would certainly have it again. I do not understand the low scores. Not every beer has to be “loud.”