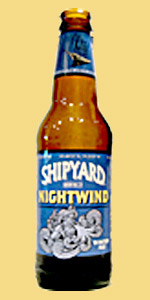 A: crystal clear; cola brown with ruby highlights if held to the light; less than a 1 finger tan head that receded quickly to a wispy cap; OK lacing;

T: sweet dark malt; a little dark fruit; mostly sweet at the end with a touch of bitterness;

O: I would have liked a bit more bitterness to balance the sweetness;

12 Oz bottle poured into glass
Look - dark brown color like cola. Very little foam head and only minimal lacing
Smell - coffee. aroma of a coffee shop. some caramel chocolate. hints of burnt smokiness.
Taste - lots of bitter roasted malt. black coffee with some chocolate cocoa. Semi-sweet but balanced. Some cream and maybe a little ginger? Carbonation is medium and body is only medium, typical of a porter. I would say slightly more carbonated though than an average porter. Spices seem to get more apparent the warmer it gets.

Overall, an interesting beer no doubt. It isn't an average porter, it has some winter spices added that give it a bit of warmth, but the porter body is still strong and robustly almost burn malt flavor. It's pretty good. Grade is a B+

Darker than I thought it would be. Brown with a little ruby glow. Very malty aroma. Good malt character. Slight bitter finish. Not bad.

DATE: January 10, 2019... OCCASION: working on salary negotiations data and in need of a lift...GLASSWARE: Abita pint... draws a dark, nearly opaque purple brown body with a bubbly, off-white head that rings to a simmer... thick, roasted malts merge with some citric kick--orange, lemon--and plum, cola, and some hints of menthol... not too distinguished overall... first sip is fizzy, medium-bodied, and deep... its cola quality is overstated--gassy in its finish and bubbly yet mildly thick through the mouth... drinkable but not engaging beyond its style--carries its 5.8% ABV well enough, though some syrupy finish detracts from the experience...the flavor profile is malt, wood, plum, grape, light citrus and cola.... its malts are the featured element, and it carries well enough... nice chocolate late... this one was a fun introduction on New Year's Eve at the Morgans, and though it doesn't quite hold its own as a stand-alone, it does accompany a cold, windy night appropriately, which is all one could ask for in a brown ale...

This really is a terrific ale. I’m guessing it has a fair amount of crystal malt, because it reminds me of an Irish red in sweetness, mouthfeel, and aftertaste. There are rich malty notes, and very little hop presence. Also almost no hop bitterness.

The head doesn’t foam up a lot, but remains modest. If you let it sit, the bubbles seem to shrink and turn into a nice foam reminiscent of something nitrogenated.

Color is dark brown, like a porter. At 5.8 ABV it’s a nice slow sipping warmer for winter enjoyment.

Notes via stream of consciousness: Nightwind pours a very dark mahogany brown colored body that appears black in the full glass and only reveals its color when held to the light. The creamy tan head above it slowly drops to a wide collar leaving some nice splashes of craggy lace and spots about the glass. The aroma is restrained but mainly gives the impression of a very dark, almost-burnt sugar or caramel. At times it can almost seem like cola. That's backed by some dark skinned fruit and a smear of melted chocolate. The flavor is fuller and follows in the same general steps but with more chocolate, more of a molasses character than almost-burnt sugar, just a hint of raisin, some additional apple/pear and red berry, a mild suggestion of smoky roastiness, and some leafy and earthy hops. Hmmm? Is there some pine there? That might explain the cola character. It finishes dry with some bitterness and hop flavor lingering. Medium leaning towards medium-light in body and softly carbonated to give a smooth mouthfeel. Having fairly recently returned from a trip to England I'll say that overall it's not bad for an English style porter of some strength - I'd have been happy to find this on cask.

It is the occasion of New Southern Samuel Springhouse Shipyard, But NO Super Bowl, Sunday (Week 676) and since I have gotten off my opening salvo, this one is next. I was at the Beer & Beverage Shoppe on Friday on my way home from substitute teaching in a new school district when I spotted this one on the singles shelf.

I wasted no time with Pop!ping the cap since it was simply another screwed-up screw-off cap. Oh well. I gave it a moderate pour followed by a vigorous in-glass swirl to raise just over a finger of dense, foamy, deep-tan/light-brown head with moderate retention. Color was Brown to Dark Brown (SRM = > 22, < 27) with NE-quality clarity & coppery highlights. Nose was an odd mélange of dark chocolate, dried dark fruits, treacle, light smoke and a general earthiness. Hmm. Mouthfeel was thin-to-medium, not watery, but not great for the style. The taste was interestingly slightly sour, especially in terms of the dried dark fruit flavor, offset by the bittersweet chocolate flavor and the earthiness that most likely came from the hops. Finish was semi-dry, slightly sour, very earthy & quite evocative of an English Porter. Definitely worth drinking on a cold winter's night with freezing rain dampening the atmosphere.

An odd English porter, without much to brag about, but solid, basic.
a) Pours a clear, dark brown, transparent and light at the edges. Head developed and left fast, fizzy and done, leaves a micro dot lace.
s) Much too faint, but it's malt first with back notes of prune, winter earth, chocolate, toffee, and brown sugar.
t) Follows smell but develops much more especially as it warms, more hops, more coffee, more juicy smokey prune & molasses flavor, but well tempered. Perhaps too mild.
f) And likewise too thin and flat to be interesting all the way down the glass. Might be a good blending beer.

A - Poured a a nice solid dark brown, which was transparent when held to the light. Head was fizzy much like a soda, although a nice two fingers, it fizzled out quickly and left nothing in its wake.

T - Taste follows the aroma quite well, a malt forward brew with sweet dark sugary flavors of toffee and molasses, almost hazelnutty. A slight earthy hop character, nothing to write home about, but enough bittering to smooth out the sweet flavors. Its really mild in flavor, actually reminds me more of a mild than a porter.

M - There is very little carbonation, but I think that hinders the appearance more than the mouth feel. The low carbonation meshes well with the flavor profile, and makes this an enjoyable drink. I could image this being really nice on Nitro.

O - Overall this is not bad. I think the appearance is the glaring negative. The Beer has no head retention, no lacing. It looks like I'm drinking a pepsi. Aside from that the aroma and flavor is akin to a mild, but it packs more alcohol, which you wouldn't know just from the taste. I seriously thought this was a 4% beer until I read the bottle. This is just a nice and simple malt forward brew that is easy drinking and very enjoyable.

I'd describe it as a hybrid between a Porter and a Scottish Ale. Delicious!

It pours a deep dark brown tone with a modest to decent foamy tan head that slowly fades to a ring. Opaque.

The aroma is vibrant with dark roasted malts, sweetness, coffee, and molasses. Any earthy hop profile is very low.

The body is medium or better but smooth.

Big coffee character in the taste and those Ringwood yeasts! Sweet dark malts lead to a coffee bitterness rather than a hopped or dry bitterness.

Solid but not stellar. A glad companion in the 12 pack for sure.