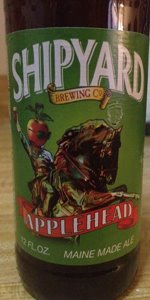 Notes: Applehead is a crisp, refreshing wheat ale with a delightful apple aroma and subtle cinnamon flavor.
View: More Beers | Place Reviews
Recent ratings and reviews. | Log in to view more ratings + sorting options.
3.37 by ScottP from New Hampshire on Jul 29, 2017
3.17 by jeffreyhill021 from Massachusetts on Mar 20, 2017
4 by Southpawwp from Massachusetts on Nov 13, 2016

Very light creamy aroma of apple juice. Average head and no lacing. Taste is slightly watered down and spice is a tad too much. Overall, this beer lacked any complexity

I enjoyed it. It reminded me of fall

Poured from a 12 OZ bottle into a pint glass.
Aroma- Fantastic aroma of apples, can't wait to taste
Appearance- Looks like a mix between apple juice and a lager. Has a small white head.
Taste- Completely disappointing. I actually feel cheated when I compare the aroma to the taste. You can taste cinnamon and maybe a hint of apple, but the beer flavor doesn't appeal to me.
Palate- This is a light bodied beer with moderate carbonation. The finish is dry and crisp.
Overall - This does not even compare to Shipyard's Pumpkin brew. I would not try this again nor recommend it to anyone unless they want to experiment with flavors

Great beer, had to try it since I love pumpkin head!

Appearance (3.5) : Pours a decent 1 finger head that quickly evaporates into a foamy ring. Body is like slightly opaque apple juice.

Aroma (3.5) : I smell a bucket of damp, mushy apples, with some of them that have gone bad in the bunch. That's probably the best I can describe it in all honesty. Could be because I just picked our apple trees in the back yard (first frost). Beyond that with more detail, there's some slight tart cinnamon, with some faint corn notes. Bouquet is medium strength.

Taste (3.75) : Tartness hits first with a classic lager taste right after, which fills out the majority of the body. At the tail end there's cinnamon and a slight flavor of candy gummi apple rings. Slight faint sourness on the finish. It's definitely not too sweet. For those who are shy of sweet apple beers, this is not one of them, so you're in the safe zone. Those expecting more sweetness will be disappointed, but in all honesty it's a beer, not juice cocktail.

Overall (3.69) : As far as fruit beers go, it's hard to find one that stands up to the definition of "craft". But this beer is pretty decent, and it probably gets a worse rep than it should. Shipyard Applehead is a beer you drink when you are in the mood for a beer, but also apples. This is not cloying or overly sweet, in fact it's more beer than it is apples. However if you want apples, it's there - and it will satisfy your craving for an apple flavored beer. I'd drink it again, I may even consider a six pack on sale. Decent brew. I feel like I've described this beer in the best ability I can. Gonna finish this one on the couch in front of the tube.