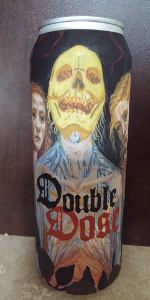 This is one of those beers I’m just going to sit here smelling and not get around to drinking until it gets warm. The aroma is not intense but it’s super-complex and I keep changing my mind about what I’m smelling - I’m going to go with pineapple and coconut cream, peach, and pink birthday cake frosting. And a bunch of other stuff.

Unexpectedly, the taste mirrors the nose pretty precisely, at least initially. Coconut cream and pineapple dominate with the peachiness and birthday cake also evident. A tingly, resinous, woody sort of pitch pine and wintergreen character becomes predominant on the back end, building up, clinging to the palate and persisting well after each sip.

Overall, this is a terrific beer. Weirdly, the palate is such an overwhelming sensory overload of flavors for me that I don’t know that I could drink more than a couple of these but then I probably shouldn’t be drinking more than a couple anyway.


Pours a very clear brass color with a middling couple fingers of head that ends up as a film leaving little lacing.
Strong stonefruit, dried apricot, coconut, mango in the nose department. Flavor is medium bitter with lots of tropical-fruit-skin/pith body to it and an underlying creamy wood bite that I am pretty sure is the Sabro coming through. It has a decent substantial feel to it along with mild carbonation and the vaguest hint of the start of a resiny finish. This is a nice beer with an interesting hop profile. It drinks kind of like a hybrid of new school and old school IPAs in that there is near-crystal clarity, a very fruity nose, an earthy/fruity, somewhat bitter flavor and a soft, puffy mouthfeel. This was also my first try of sabro and I like it pretty well. With a less idiosyncratic hop profile that was less new to me I might have rated it a scoche higher, but it was very enjoyable and palate expanding for that same reason. A real interesting character that, while not my favorite, is pretty interesting and I'll seek it out in the future.

Rated by Franck from Canada (QC)

S-Labeled as a West Coast Style IPA but it smells much more like a Belgian IPA. I get a bunch of spicy Belgian yeast aromas here. The hops are present with citrus but this smells phenolic and Belgiany to me.

O-Not a big fan of this one. There is a disconnect between how it's described and what it actually tastes like to me.

Reviewed by olivianjeremie from Canada (QC)