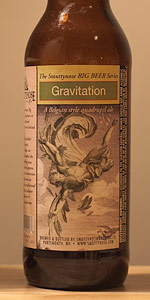 Notes: This big, dark ale is brewed using a variety of Belgian specialty malts along with 200 pounds of raisin puree per batch. The resulting flavor is a viscous mix of dark fruit, rum, toffee and raisins balanced with aromatic fruitiness of the Belgian yeast.

Pours a brownish copper color with a slight layer of head. The nose has very mild breadiness to it. The flavor is generally the same with modest bready and malty notes. The body is super thin.

I genuinely can't say if this offering is way past its peak and moved into has-been territory or if this beer is a never-was.

Reviewed by Stout80mizer from Florida

4.05/5  rDev +10.4%
look: 3.75 | smell: 4.25 | taste: 4 | feel: 4 | overall: 4
This was poured into a chalice. The appearance was a hazy muddy brown color with light purple tinges on the sides of the glass. A half finger white to off white foamy head fills the top of the beer. The smell was that of a normal Belgian Quad in that it has the Belgian spices combining with some bananas, plums, raisins and ends up adding a nice bready and earthy yeastiness to it. The taste was sweet and spicy through the previously mentioned flavors leading to the same flavored aftertaste and into a dry finish. On the palate, it sat about a medium and indicated that this one was more of a sipper for the most part. Overall, this means everything for a good Quad. Would I have it again? Quite possibly.
Aug 01, 2017
Rated: 4.16 by GravityKills from Massachusetts

3.83/5  rDev +4.4%
look: 3.5 | smell: 4.25 | taste: 3.75 | feel: 3.5 | overall: 3.75
22 oz bottle marked "bottle conditioned 2015 ABV 12.3" poured into a tulip glass at fridge temp. The beer is copper colored with orange highlights when held to light. The head is light khaki and recedes fairly quickly leaving a ring around the glass and no real lacing. The aroma is a beautiful mixture of plum, brown sugar and sweet caramel without any alcohol notes. The taste is similar with sweet caramel, plum, raisin and brown sugar all making a brief appearance. It finishes without any notes of bitterness and no shift in flavor. Mouthfeel is a bit thin, well carbonated and semisweet in the finish. Overall, good. This beer lacks some of the dimensions of a world class example. It has gotten better with age and for the price, it's worth grabbing a couple and tucking them away.
Jun 25, 2017

Pours a reddish-yellowish-amber, sort of like fig preserves or maybe pee the morning after you got kicked in the kidneys. There is no head, so nothing to talk about there. Lots of busy-busy, big-bubbled carbonation which suddenly stops, leaving the glass looking like a Jello shot. Shit, I'm scared.

Smells nice, though. Plums, acorns and tobacco. Also, it might smell a little like those jeans you were wondering whether you needed to put in the laundry.

Actually, it tastes really nice. Maybe I'm just super-suggestible but it tastes like the fig preserves I said it looked like and the plums I said it smelled like. Lots of nice warm fruits, the figs and plums, cherries, walnuts, dried leaf-tobacco and caramel creams. I think I'm going to add points here just because I was expecting it to taste like crap and, in fact, it's really, really good! No trace of the faint copper I detected in the nose and then forgot to write about. Super clean finish.

Mouthfeel is smooth and creamy, no more than medium-bodied and, while there's not much carbonation left after the (apparently) overly-enthusiastic pour I subjected it to, there's still enough to keep it easy-drinking. There's no abv stated on the bottle and, I think, that's just about right because I can't actually taste any alcohol.

Overall, this was an excellent quad! And one of the things that made it so excellent was that I thought it was going to suck! Point of clarification: I don't think this is the same raisin-purée-mess that Todd subjected himself to back in 2010 or, at least, there's no mention of raisins on the label today. It just says that it's abbey style that they've 'tinkered' with and 'tweaked,' whatever the fuck that may mean. It's too bad because I bought this bottle for somebody and then decided to drink it myself after I saw the ratings and it turned out to be fucking awesome. By the way, I drank the whole bottle while I was writing the review, in case you couldn't tell.

Smells like a high octane quad. Big ripe fruit and then sharp fruity alcohol that's bordering on that of a bad mead.

Tastes, unfortunately, more like the booze than like the fruit. It's like they were going for a BIG quad but then just let the BIGness totally overwhelm the quadness. Sharp, unpleasant alcohol starts things off, very incredibly sharp, and then ending on some pleasant enough spice and fruit. It's not horrid. I've had worse. But this is still a beer to forget.

Aromas of grape and prune both.

Raspberry or maybe dried cranberry flavor coats the mouth with a really frothy body and tons of flavor. A bit tart as well, with cherry in the background.

This is the second quad I've had that is this sweet. At first I thought it was off, but after having Gulden Draak I'm not sure what to think about quads going forward.

Reviewed by GreatStoutman from Texas

Pours somewhat murky dark copper color with no head and the faintest of off-white rings.

Taste is dominated by the sweetness and yeast, decent malt and surprisingly high bitterness.

Overall, I like smuttynose and this is the cheapest 12.3% Belgian I've ever purchased, but it missed the mark for me. Nothing to get excited about here.

Reviewed by PorterLambic from Florida

3.6/5  rDev -1.9%
look: 3.25 | smell: 3.75 | taste: 3.5 | feel: 4 | overall: 3.5
Pours a rich, golden color with a bright, white head. Retention isn't a strong suit, dropping to a wispy film with a minute.
Smell has notes of apples, grapes, rum, nail polish, and some grain.
Taste is apples & grapes again with a very sweet maltiness. Rum and some light spice are in there as well.
Nearly full bodied, very faint carbonation. Sweet and cloying, especially in the aftertaste. Not their best effort.

Reviewed by ClavisAurea from New York

This was the lightest colored quad I've ever had. It was like a dark honey color with a nice team head that sank to a rim of foam. Delicious Dark fruits and malty sweetness. Belgian yeasty character led to a nice lingering finish off Dark fruits and malts. Wonderful brew. There was some alcohol but it was 12.3% so it's to be expected. I'd buy this again. It was in my cellar for about 6 months and I have no doubts it would be beat for years. I'll have to but more next year.

Reviewed by Chickenhawk9932 from Pennsylvania

Reviewed by madelfonatree from Ohio

I did not have high expectations for this beer as I bought it with other "expired" Big Beer Series beers for pennies on the dollar. Keep in that in mind when I rate this beer higher than others. Why is the rating so low?!

Look - Bright red, almost pink when held to the light. See through. The head was slim to none and didn't stick around long. It had think bubbles and was a little off white. There is no lacing to speak of because of this.

Smell - Booze on the rum side of things. Grape. Raisin. Caramel. Low rating due to alcohol strength.

Taste - Booze doesn't come on strong until the finish. Very sweet. Grape and raisin. Caramel. Spicy. I can only assume based on the reviews this beer has mellowed with age.

Overall - Very disconnected ratings on this one. Two years must have done this beer well. Very sweet but strong flavor to go with it.