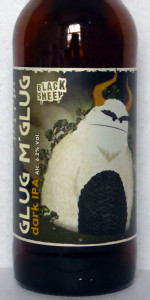 L- V deep chestnut. Been distracted for 20secs after the pour but it's now heading for lacing
S- Nice. Pungent, puddingy, a good 6.2% from a can seems possible...
T- Slighly 'edgier' than expected, as in I thought it'd have a wider flavour profile. Yep hoppy, and pretty heavy-duty.
F- Not a 'light passing refresher', this thing demands attention. On the hoppier side of things,
O- For a 6.2% it might be just over on the dryer/hoppier side for me. Not a 'hop-bomb' but the hops are over-present for me.
From Black Sheep, Masham, N. Yorks. This brewery was a break-away from the Theakstone's family/group [hence 'Black Sheep'). Bought in Waitrose, Windsor in a 330ml can BBE 02/07/2019

330ml Can from B&M Bargains, Glasgow (£1.25):
This one is one of the lighter black IPA's that I've tried & it was quite a fresh, floral beer as a result with some nice hops & touches of citrus in the early going before the darker malts & caramel flavours started to come through towards the middle. It was a lively & finely carbonated offering that had a nice sharpness to it & was quite dry towards the end; a solid beer that was quite sessionable too.

Canned in presumably craft can
Pours a dark brown body with fleeting off white head
Cough drop aroma, not menthol but medicated
there is that in the flavour with chewy, rye malt
Black sheep just dont do hoppy
an enjoyable beer but no BIPA

A 330ml bottle with a BB of Nov 2017. Purchased a little while back from Morrisons. Described on the label as a dark IPA hopped with Cascade.

A: Poured into a tulip. A dark ruby-brown colour with good clarity and light carbonation. Produces a large head of creamy off-white foam that lasts for a while before reducing to a patchy surface layer. In appearance, more strong ale than black IPA.

S: Aroma of fruity malt and yeast esters, with hints of prunes, fruitcake, subtle brown sugar, leafiness, a touch of roasted grain and faint earthiness. OK though not particularly hoppy.

M: Mouthfeel is smooth and lightly tingly, with soft carbonation and good body. Could be a tad more textured. Aftertaste of fruity malt, yeast esters and bitter stewed leaves.

O: A rather odd and not entirely satisfying ale. Looks OK, while the aroma and flavour are an interesting blend of fruity malt, ale yeast and stewed hops. Aroma hops not much in evidence. Body is alright but could be more carbonated. In style it most resembles a strong ale with plenty of bittering hops, and not so much an IPA. It's just a bit muddled - I think Black Sheep could do with rethinking this one. No need to hunt it down.

As described in appearance.

Taste of burnt Christmas cake with a touch of Bergamot. Mouth feel is rich and almost slimy.

Feels like the yeast has chucked out some esters which mixed with hints of new world hops, does not quite work.

S) To say this is a strong dark IPA, it just smells like a normal strength English bitter.

F) Fairly light considering the ABV, although a bit of weight at the end. Surprising amount of fizz for the style. Malty taste.

O) Malty goodness, like it but its no IPA.

Label suspiciously claims “dark” - not black - IPA, and sure enough, the pour and smell are pure Brown ale. And so it goes: lovely brown notes, not even beginning to talk Cascade (per description). The end is super clean and surprisingly bitter, so it’s not like there’s no hops. This is either 6 months old or has no additions after 20 minutes.
Pretty much what I’d expect from a large regional trying to figure out how to do craft. 3.5

Glug M'Glug from Black Sheep Brewery PLC
Beer rating: 83 out of 100 with 15 ratings