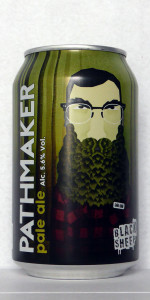 Piney aroma, drank straight from the can so can't tell much about the look so gave it similar to other scores.. Taste is very tart, fruity hops trying but failing to burst through an acrid bitterness. Taste of metal and chemistry sets. Not that pleasant. Shan't be revisiting.

330ml Can from B&M Bargains (£1.25):
An interesting beer that definitely started off better than expected thanks to the freshness & to a lesser extent the liveliness of the nose, there was some nice citrus & pine coming through with a strong floral aroma too. Things died down slightly with the nose which was a little disappointing, I'd have liked to see more of the floral flavours coming through with the bitter hops, although some of both did show but I wanted to see more. It was a balanced beer but definitely not as crisp or sharp as some of the better American versions of the style which held it back a little & I'm not sure it's one I'd hurry back to really.

A 330ml can with a BB of March 2018. ABV is stated as 5.6%. Acquired a while back from Morrisons. Named for the founder of Black Sheep, Paul Theakston, and described as a pale ale hopped with Chinook.

A: Poured into a tulip. A rich, hazy amber hue with good carbonation. Produces a large head of frothy white foam that lasts for a minute or two before subsiding to a patchy surface layer. Nice lacing.

O: Alright, if not amazing (better than their other 'craft' offerings). Looks good, while the aroma and flavour are balanced and slightly hop-forward. Nice body. Goes down OK but doesn't set the senses on fire. No need to hunt it down.

Pathmaker from Black Sheep Brewery PLC
Beer rating: 83 out of 100 with 10 ratings