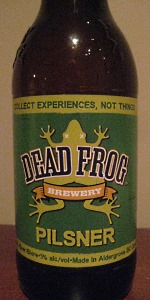 Notes:
View: Beers
Reviews: 1 | Ratings: 2 | Log in to view all ratings and sort

This beer pours a slightly hazy, pale golden yellow colour, with a near-teeming tower of puffy, rocky, and rather chunky bone-white head, which leaves a crazy array of broken webbed lace around the glass as it slowly ebbs away.

The carbonation is nice and testy in its alternating fizzy and frothy ministrations, the body a decent medium weight, and not particularly smooth, as a certain hoppy and gassy astringency kind of stomps all over the place, but somehow it's not really that big of a deal. It finishes trending dry, as the crackery malt mind melds with the lingering green hops.

A more or less slavish attempt (or ode, if you prefer) to mimic the better versions of the style from 'die alte Welt'. Generally crisp, and good at inviting, nay, insisting that one take another slug sooner, rather than later. Glad I got the chance to give this one a go!


Pilsner from Dead Frog Brewing
Beer rating: 3.58 out of 5 with 2 ratings