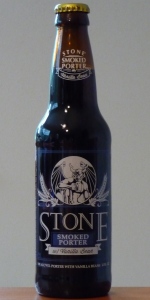 Notes: In 2006, almost exactly 10 years after we first released Stone Smoked Porter, Stone Small Batch Brewer Laura Ulrich had a brilliant idea: What if she added whole Madagascar vanilla beans to a small batch of the finished beer? And voilà, Stone Smoked Porter w/Vanilla Bean was born! It was an instant hit, as the resulting flavor combinations—rich vanilla melding with the malty, chocolaty, coffee-like characteristics of the beer—were practically made for each other. Originally available only as an occasional growler fill or on tap all-too-briefly at special events or in our restaurant, this exquisite creation was released in a single bottle run for the first time in 2012, much to the delight of its many fans…who instantly began clamoring for more.
View: More Beers | Place Reviews
Recent ratings and reviews. | Log in to view more ratings + sorting options.
4 by TMoney2591 from Illinois on Jan 27, 2022

From old, undated notes; had this on draft.

A mild nose of cream soda, vanilla & a hint of smoke.

The flavor profiles don't match up & make this a bit tough to finish. A disappointment.

A: Pours dark brown with a slight ruby tone and a frothy tan head that settles to a light layer and leaves some nice lacing.

M: A touch on the lighter side of medium body, moderate carbonation.

O: Snagged this bottle at a liquor store, apparently the owner put away a case to cellar and decided it was time to bring it back out. Somehow I missed this variant back in the day so I had to grab a bottle. It's held up quite nicely

Poured a 2014 bottle into tumblers for me and the missus. Pours very clear, dark coffee brown with an inch of rich, foamy head that persist, minimal cling.

The smell is boozy vanilla with mild smoke that was probably more intense when the beer was younger. Nice malts with the smoky thing going on, but even considering the age the aroma is subdued. Pleasant, though.

Taste is chocolatey coffee with smoke. Vanilla emerges as the beer warms and lends sweetness. The sweetness is at that just right point, being present but not sticky. A little bitterness keeps things clean. Nicely flavored, only mildly boozy versus the nose.

Overall, this is an excellent beer that I wish we had opened fresh. As it s, with three years on it, it is still drinkng fabulously.

One of my drinking buddies is the only other person in our circle of friends who really digs smoked beers. On T, 18 July 2017, we got together on my front porch for smoked everything - beer, meats, cheeses, oysters. It was a great excuse to run through some bottles that I had been saving for just such an occasion.

Having Pop!ped the cap, I employed a gentle pour for each of us. An in-glass swirl raised a finger of foamy, deep-tan head with decent retention. Color was Dark Brown to Very Dark Brown (SRM = > 27, < 34) with NE-quality clarity. Nose held a LOT of vanilla, underlain by a sweet smokiness, like peat, perhaps? Mouthfeel was medium. The taste was more sweet than smoky with an emphasis on the vanilla, reinforced by whichever smoked malt had been used in the beer's production. Finish continued with a pronounced vanilla flavor underlain by that same sweet smokiness which reminded me of locally produced Sweet Lebanon Bologna. Very nice!

Pours dark brown, almost black just like the base version, 1/2" cream colored head. Excellent retention on this one. Aroma was still mostly roast.

Taste has a much obvious vanilla sweetness to it that tempers the roasty notes. The base is also well hopped, so much of that bitterness is also tempered by the vanilla bean addition. Alcohol remains out of the way taste and mouth feel wise. Coffee from the malt feels.

This is a real good base porter and they even improve on it by adding vanilla. Very good, I really like the 12oz bottles because they cost so much less than the 22oz bottles in a price per oz analysis.

In 2006, almost exactly 10 years after we first released Stone Smoked Porter, Stone Small Batch Brewer Laura Ulrich had a brilliant idea: What if she added whole Madagascar vanilla beans to a small batch of the finished beer? And voilà, Stone Smoked Porter w/Vanilla Bean was born! It was an instant hit, as the resulting flavor combinations—rich vanilla melding with the malty, chocolaty, coffee-like characteristics of the beer—were practically made for each other. Originally available only as an occasional growler fill or on tap all-too-briefly at special events or in our restaurant, this exquisite creation was released in a single bottle run for the first time in 2012, much to the delight of its many fans…who instantly began clamoring for more. Your voices have been heard." Brewed in the style of a Smoked Porter ale with vanilla beans added. Available in 22 oz. bottles and on limited draft. 2013 & 2014 bottled releases with comparative notes.

(Appearance) Pours a creamy frothed head of a pale tan complexion over a deep caramel brown body with abundant carbonation. Retention is good and lacing is light and spotty. 3.75

(Mouthfeel) Texture is slick, lightly residual, softly chewy, smoky and medium dry. Carbonation is medium, generating a medium frothiness and a modestly crisp finish. Body is medium+ for the style, medium+ overall. Balance is nearly even sweet to smokey grain and specialty malt character. Alcohol presence is light and there are no off characters. 3.5

(Overall) Despite being significantly past the suggested peak of enjoyability, this 2014 bottle of Smoked Porter with Vanilla Bean retains a great smokey character and the essence of vanilla without bringing saccharine sweetness to ruin the balance of flavors. It is surprisingly much better than I anticipated. 3.75

2013 (3 years aged): Pours a crisp, foamy head of a medium tan tone over an equally dense body with lively carbonation, slightly more clarity, but superior retention to the fresher batch. The aroma was significantly more stale, with cardboard and musty vanilla cream, less smoke character and more residual sweetness, nonetheless serves more resemblance, despite its flaws, to what I anticipate of a Vanilla bean-infused porter. The flavor largely follows the aroma, with significantly more perceived sweetness, less smoked malt character, and a shallow chocolate body, yet retains most of its lightness, and the vanilla, largely due to the absence of specialty grains, is more evident in this vintage than the fresher beer. Texture is slick, softly syrupy, more smooth. Carbonation is a touch lighter, with more creaminess and a softer crisp finish. Body remains the same, while balance brings slightly more sweetness to the mix over specialty grain character, with the creaminess and almost lactose vanilla bean sugars throwing balance off somewhat. In the end, this beer marks a crossroads between a well-built beer just going old to a bad fresh beer going soft and thus, turning somewhat enjoyable as some of the more fragile adjuncts mellow out. Nonetheless, I prefer the retained smokiness of the fresher batch with the vanilla bean a delicate afterthought, but think that a beer that retains the best of both vintages would be outstanding. There was no doubt some recipe tweaking (or dialing back of the vanilla in particular) between years evidenced here.

Recommended Vintage: Fresh (And don't do this experiment... take it from me.)

22 oz. bottle into a tulip glass

A - Beer pours pitch black in color with minuscule hints of red around the edges of the glass. No carbonation is visible clinging to the edges of the glass and due to the hue of the beer no carbonation is visible in the liquid. Head is 1 finger in height and a light tan color. The head is well retained and dissipates to a thin lacing by the end. 4.25/5

S - Vanilla bean, cocoa powder, espresso, and a light smokiness make up the initial part of the tasting. This transitions to a brown sugar and caramel sweetness that complements, without overpowering, the vanilla bean. Not as smoky as expected based on this being a smoked porter. 3.75/5

T - Dark chocolatey sweetness that runs parallel to a very light smokiness makes up the front of the beer. Earthy, espresso bitterness comes in fairly quickly alongside the vanilla bean with this transitioning to an earthy hoppiness by the end. A bit woody and oakey throughout the profile as well. 4/5

M - Medium heavy body with a slight carbonation tickle. Not overly heavy and has a lingering creaminess to the back of the palate upon swallowing. Somewhat drying at times but mainly creamy. 4.25/5

O - For this being a smoked porter it is not overly smoky. Rather than smoke, the main focus is on vanilla bean and it's accompanying/balancing sweetness that keeps the bitterness in check. Very nice combination of flavors and aromas makes for a complex profile and enjoyable tasting experience. 4/5

Aroma of this is great!