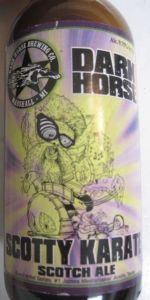 Notes: For those of you who don’t know who “Scotty Karate” is… He is a local one man band who plays an amazing slurry of honky-tonk influenced, punk-country songs. (Check him out at www.scottykaratetime.com) A big bold musician deserves a big bold beer, that's why Scotty and our Scotch Ale are a perfect tribute to one another. Scotty Karate is brewed with cherry wood smoked malt instead of the traditional peat smoked malt offering up warming notes of coffee, caramel and sweet caramelized brown sugar. Scotty finishes earthy giving this beer a character all it's own, just like the man himself.
View: Beers | Place Reviews
Reviews: 623 | Ratings: 1,869 | Log in to view all ratings and sort

Great Tasting Scotch Ale!
Look is a caramel brown color
Smell is a smoky pear
Taste of fruits and dark sugar
Feel is full and rich
Overall One of my new favorites. I picked up a 4 pack to enjoy over the holidays with friends

Pleasant but kinda boring; I won't avoid it but I won't seek it out.

Very dark amber color. Subtle smell of raisin. Moderate scotch bite that reminds me of when you're nearing the end of a glass of scotch after the ice has melted. Good hearty beer for fall or winter.

Tastes so smooth and yummy that you can forget that it’s 9%. A scotch ale that isn’t bitter or overwhelming. The alcohol can sneak up on you though.

355ml bottle from Brewdog.com (£2.80):
A caramel brown coloured beer with a thin, bubbly head that's got more of a build up in the centre of the surface but is finer around the sides. It's definitely a sweet nose with caramel & toffee notes initially followed by a few burnt malts & sugars. There is some darker fruits, raisins & prunes a little further on as well as touches of boozy alcohol right at the end. The taste is similar with lots of caramel, toffee & slightly darker malts coming through with a sugar sweetness & some alcohol sneaking in towards the end & giving a pleasantly warming feel to proceedings. Its a heavy & fairly smooth beer that's very well balanced with some darker fruits, prunes & raisins right at the end but it goes down really well for such a strong beer.

A strong pour from a 12-oz. bottle yields a skinny finger of light beige creamy froth with short retention and minimal lacing. Murky translucent copper penny color (almost new).
Baked sugar greats the nose with baked apple and fig, Faint roasted malt and alcohol.
The taste is a sweet and lightly bitter, malty rich and even throughout. Very light peat flavor and smoke. Bakers chocolate and coffee add some bitterness during the long finish, the aftertaste is similar with faint alcohol and a roasted malt astringency.
Medium-full bodied, plenty of carbonation in reserve. Sweet, smooth and balanced, roasted malt bitterness replaces hop bitterness. Alcohol is cleverly hidden by the sweetness.

Pours a deep autumn brown, thick foamy head. Aroma has some amber & scotch malt but some sweet undernotes of caramel & butterscotch. Could pop a little more. Taste is pretty smooth and isn’t as chewy as some wee heavys. It has that traditional malt profile but has mild elements of charred oak, coffee & caramel. None of those notes are too dominant and really provide some depth to the style. Finishes a tad smokey with a medium malt density

12oz bottled 10/29/18 (I think?, please get a better system Dark Horse) poured into a shaker pint at fridge temp 9.75% ABV. The beer pours mostly bright medium brown with amber & chestnut highlights. The head is khaki colored and recedes to a thin film. The aroma is malty and earthy. The taste is slightly smokey toasted malt with notes of chocolate and coffee on the finish. Overall bitterness is low, but I would never say I get sweetness either. The mouthfeel is thin to medium bodied, adequately carbonated and mostly dry in the finish. No trace of the ABV. Overall, excellent. Really a must try if you are a fan of the style.

This beer, for me, always reminds me of home (midwest). My absolute favorite scotch ale around . 100/100 . The high ABV is hidden really well, the finish is smooth and leaves a delicious taste in your mouth, and the color is beautiful.

Smooth, dark, just plain good drinking. A bit of caramel in there? Nice! I was pleased with this and looking forward to trying another. From a taster. 2018/11/25

Extremely malty, not as clean tasting as some of the other scotch ales I have tasted. This one is still full of flavor and definitely a good one to seek out.

Poured from 12oz bottle into glass. No dating information found on bottle or on label. Some sludge left at the bottom of the bottle.
Murky, amber brown colored body. Light tan head dissipates to thicker ring. Leaves behind a spotty sheen on the glass. Lots of tan sediment particles in the beer, some of which rise with the bubbles.
Aroma of caramel, toffee, a little tea, dried fruit (figs), burnt brown sugar.
Taste is sweet from brown sugar, caramel, and toffee. Has the dried prunes and figs. Some coffee and chocolate in the background. Lots of roasted malts. A little peaty smoke at the end.
Medium thick to syrupy mouth feel. Lots of rising bubbles but felt carbonation hits on the tongue and is short in duration.
Quite the appearance with all the tan particles floating and moving in the beer. Pleasantly sweet with the dried fruit and dark roasted malts.

This pours a rich brown color with a voluminous tan head - and floaties. A TON of floaties. I’ve never had a scotch ale with floaties, so I’m curious to see what is going on here.

Everything is copacetic - nose is big toffee and caramel notes, and that carries over to the taste, and the mouthfeel is on point. But those floaties - they’re freakin’ me out, man.

Served at 50° in a Gordon Scotch Ale glass. The best glass for this style.

Aroma: full plum and fig, some malt. Lingers throughout the tasting.

MF: very creamy, smooth. Unlike a light bodied approach in some other Scotch ales.

I tried this at the Wexford Ale House in Wexford, PA. It poured a clear amber with no head and no lace. The scent had sweet barleywine presence. The taste was also sweeter in nature. The mouthfeel is lighter in body with smooth carbonation. Overall it's ok....there are better scotch ales out there.

Bought a growler of this beer on a recommendation. It pours a dark amber. Nice head but it dissipates quickly. Flavor is nicely complex. The scotch, raisins, molasses, but only light. Very drinkable. No notice of alcohol at all. Overall a great beer.

Overall: I loved this beer. I was expecting to be impressed by malts and alcohol, but I had no trouble finishing a bottle rather quickly. It is plenty sweeter than other Scotch Ales, but I enjoyed that aspect of it. Not overwhelmed by a particular scotch quality (which was nice), but it has a tiny after taste of peat. Will certainly buy again!

5/2018 UPDATE: This beer is very good. Increasing scores to all fours.

Aroma: distinctive: alcohol, dark fruits (raisin or plum), and something else good I can't quite put my finger on.

I drank this in a side-by-side with Backwoods Bastard and Schlafly's Ibex Scotch Ale. I used it as a base line. A solid Scotch ale.

I have wanted to try this high-rated Scotch ale for years but seldom saw it available until now. Still have not had the BBA version, which costs twice as much.

Poured from the 12 oz. bottle into a Samual Smith English tulip.

a; Clear dark ruby/copper with an inch and a half thick offwhite head which receded slowly to even surface foam and very dense lacing. Spectacular.

t; Follows the nose with some alcohol bite (9.75 ABV). Sweet finish with bitter notes from the alcohol.

o; Comparisons naturally occur to more common Scotch ales such as Founders' Dirty Bastard, as well as more difficult to locate ones such as Belhaven's. This has richer flavor and more alcohol presence than Founders (which has 1.25% less alcohol). I would rate it in between Founders and Belhaven. At about the same pricepoint as Belhaven it's close to a tossup which is better but I would go with Belhaven. However, Founders beats them both on price at under $2 a can, especially when purchased in a twelvepack.

Minimal carbonation and lacing, malty caramel on the nose, and similar with the flavor profile, balanced by bitterness. Easy drinking for an elevated ABV. Great representation of the style