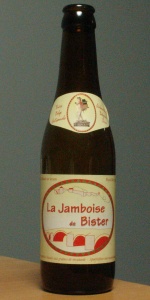 Flavor: slightly malty sweet and a bit nutty, not much hop flavor and just a touch of bitterness, semi-sweet finish with an odd tangy aftertaste

Overall Impression: This is a brew contracted by the Moutarderie Bister in Jambes, Belgium. Consequently, it is a beer spiced with mustard. It was initially brewed by MIBRANA, but has since been picked up by Lefebvre since the former brewery closed. The "La Jamboise de Bister Special Brune" is also spiced with mustard.

Not too bad, but not particularly spectacular either. It is better than Wostyntje (also brewed with mustard), but I'm not sure if that's just because it came out first. Though it's hard to peg the strange flavor as mustard, I can say I'm not too fond of the sour-musty flavor it contributes.