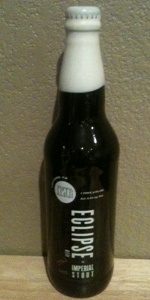 2011 Eclipse aged in 20yr Elijah Craig Barrels.
White wax #4680. Stored in Eurocav since bought. Served in a snifter 11/26/2019
Look- Very dark as expected. Held at the right angle a faint deep brown/amber is visible on the edges. Very little to no head.
Smell-mild bourbon, cocoa and mildly sweet...teenie tiniest alcohol smell at the end but not a bad thing.
Mouth Feel- Mildly thick that coats the tongue. Very nice mouth feel.
Taste- it held up well. Little bitter dry cocoa taste up front and bourbon, a little bourbon tang that tingles on the tongue and a little sweet.

All and all I'm very pleased with how it held up.

A: Poured into a snifter to a black beer topped by a dense finger of tan head which fades slowly to a collar around the edge of the glass with minimal lacing.
S: Smells of intense oak and wood with some coffee and chocolate. Nice roasted malts in the back as well with just a little vanilla.
T: Taste is pretty heavy on the oak in the front with some chocolate and coffee coming in. Slight butterscotch as well with some more oak and a little vanilla. Slight molasses note as well along with some roasted malts along with some more chocolate. On the swallow this beer is creamy vanilla and chocolate with some more roasted malts and a little more wood with some slight woodspice.
M: This beer has a pretty full and silky body. Carbonation is light but adequate for the style while the beer has a drying finish.
O: Overall this one is really nice. It has some great flavors and complexity while being very well integrated. Just a decadent and delicate beer for the most part right now. Not tasting too much over aging on this one so I chose a good time to crack it open.

Served in a snifter, it pours black as a midnight with a coy moon, for the rim of the glass unveils a dark brown, slightly diaphanous. In fact, if a sunbeam hits the beer directly, it turns ruby-like.
Decent amount of carbonation visible, as the pour formed a one-finger head, dark brown, that dissipated quickly. A small trace of such head is left visible as a thin ring, decorating the rim.
Swirling the glass provokes some very nice lacing combined with alcohol legs.
It definitely looks very peculiar for a BA IS.

The bouquet is delicious.
The bourbon character is definitely there, but subtle. Assertive yet not overpowering, compared to other BA IS's. Such trait makes this bouquet probably the most enjoyable I've experienced so far within this style, as there is an equilibrium to it. The coconut note is also worth mentioning, since it is not as overpowering as it often is.
Bourbon, vanilla, lots of chocolate, oak, charred wood, coconut, espresso, caramel, prune.
Scrumptious.

What an incredible delight.
The subtle character from the bouquet is equally perceivable in the flavors.
They are all there, but at ease, without quarrels for protagonism.
I don’t enjoy a high or decent carbonation in this style, and judging from the look of this beer, I thought this was one of those cases, but the first thing that stands out is a very low carbonation. Somehow they managed to keep the proper look of a beer without hampering the mouthfeel of the style. The high ABV is well disguised.
The bourbon hits first, followed closely by vanilla; then, chocolate overruns your palate. Afterwards, coconut, dark fruit liquor, oak, caramel and molasses.
Another stunning characteristic: after the bevy of sweet notes enrapture your senses, a slight bitterness enters the frame, and then you realize, the sweet notes in this beer are not overly sweet, they are balanced.
The aftertaste has a decaying sweetness in the form of vanilla, bourbon and caramel, but short after, it becomes dry. Such balance and dryness add a layer of complexity to an already superb beer.
Velvety, full body, silky, but not chewy. The texture of the beer is as subtle as its bouquet and flavor.

The complexity, balance, and subtlety of this beer is second to none. Beer at its finest. I liked this even better than BCBS.

World class beer for sure.

Black pour, cherry cola color head on the top. Mix of chocolate, booze, bourbon, roast that makes up the aroma.

Taste just pours on the decadence, the Elijah Craig barrels always seem to impart the most chocolate of any of the barrels. Plenty of vanilla on this one too. Mouthfeel smooth and chewy. Sticky. Easily one of the best Eclipse beers ever made.

Same impenetrable black (largely headless) appearance of the other Eclipses I've had. Nose full of vanilla, milk chocolate, hazelnut and oak. The taste is a nice blend of chocolate malt and vanilla barrel. It also has the cola notes I detected in the High West bourbon version. Mouthfeel is full but light for a bit imperial stout. This is a good example of a series I rather love and falls resolutely in the middle of the Eclipse pack. Curious how the 12 Year EC compares. Wouldn't search this out again, but I'd be pleased to see it at a bottle share.

This is an amazing BA stout, take the Elijah Craig 12 eclipse and add some extra smoothness and you have this beer. A true gem to enjoy, wish this would make a comeback.

Initial taste was a bit hot and syrup like but as the beer warmed in a snifter the sweetness of Totality and EC20 came to the forefront.