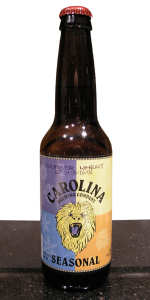 On tap at Sawmill Tap Room

Pours a yellowish gold with a thin lacing of head. Smells is wheat and citrus with hints of lemon and spice. Taste is bitterness up front with good hop character followed by a lemony citrus. This beer is clean, crisp, light, and drinkable, though a little too light for me.

Overall, this isn't a bad beer for the style, but it's just another one of those just-better-than-average summer beers.

T: has a mild grainy and malt character with a low noble hop bitterness for balance. has a light flavor to it.

Drinkability: good summer beer. could easily put back several of these on a warm day.

Pours straight yellow and very clear with a one-finger head. Head does not stick around long. Leaves extremely faint lacing.

Easy to drink, but nothing to get terribly excited about.

The beer was served a crisp orange with a thin diminishing head. Aroma was some faint malts and hops. The taste was very much on the hoppy side, not much wheat characteristics to this one, they seemed to be buried in hops. The beer was light, crisp and refreshing. While this one was drinkable, I likely won't have another one this summer.

Tasted this one at the brewery during their regular brewery "tour" every Saturday.

A: My sample was a full pint pulled from a keg in their cooler. Color is pale gold and crystal clear, with a nice foamy head of a little more than an inch. The head recedes fairly quickly leaving a thin ring of white. There was vary little to no lacing present.

S: Thin mix of malts and wheat with a touch of hop sharpness.

T&M: Taste is light and clean with a great balance of hop bitterness. A crisp character with sharp light bubbles and a slightly dry finish, leaving a fleeting linger of wheat and hops.

D: A great brew with light snappy character and crisp clean finish. I would recommend this as a great summer brew that would go great with any BBQ or picnic food.

Poured a clear straw gold. Absolutely clear whih I found a bt of a dissappointment for the style. Not much in the way of a head but that may have been a result of a bad pour. Nose is more citrus than anything else and just a slight hint of wheat but both are very, very thin.

Flavor is heavier on the hops than the malts. The bittering is a bit out of balance with the malts and comes across tasting like tin or aluminum. The flavor that this beer was all about was citrus. I looked deeply into the glass for an orange or lime wedge--heck, or even a grapefruit wedge--but there was none. I could swear from the strength of the ctirus that te bartenders snuck some fruit into my glass. Not the typical thick, chewiness for the style but not too bad. The metallic tang was a bit too much though. However, after the first couple it became much easier to drink.

Hazy, pale gold body but the head is a bit lacking for style that really demands more.

Lemony hay and grass scents are stand-out and the citrus really carries on throughout. Nice!

Grassy with a bit of yeast although that's not the main taste here. There's a flavor that is unsettling about this beer that I can only describe in a way that many South of the Mason-Dixon Line may not understand; there is a mineral/dirty quality to this beer that is a spot-on replication of the taste of snow after it's been on the ground for 24 hours. This beer takes me back to many a face plant on failed sleding runs as a kid. Fun but not what I want in a beer and certainly not from a summer brew.

Decent carbonation but none of the chewiness I like from wheat beers. Tastes just OK although I could possibly see its merits as a refresher in hot weather. Not something I'll reach for again soon.

A little out of season to have this one now, but better now than before it goes bad.

Pale apricot, kind cloudy. Basically no head, only a ring of white. Nothing exciting or inticing at all. This is a wheat beer, it should have some head to it...Blah...

Wheat and yeast aromas. A little lemony with some hints of citrus rinds. Light overall and pretty simple.

Taste is better than expected and much different than the aroma hinted at. In general pretty wheaty with lots of straw and a touch of musty hay. Has more of an earthy bitterness to it, something I have seen in other pale wheats.

Taste and mouthfeel do it for this beer, while I find the rest pretty ininspiring. Easy to put back though...too bad it isn't summer when I could use a refreshing light beer.

Compliments of AkSmokedporter
12oz bottle into a pint glass.

A--- Poured an unfiltered pale straw with a little white head.

D---I would like to try this fresh. It was bottled in August so it is seven months old. It has held up very well and is worth another try.

taste: above average bitterness, pilsner like characteristics but still a big bready wheat bite...this beer is kind of on the fence between wheat and pilsner...flavour is somewhat watery with lemony highlights, other citrus...just average

mouthfeel: a bit bitter for the style, medium body

drinkability: easy enough but 1 is plenty

When I received my glass there was about a third of an inch of head on the beer that remains. The liquid is a golden straw color, and is clear.

Other than the wheaty malt flavors, there is a considerable amount of lemon like citrus on the nose along with some green hops.

The carbonation is moderate and the body is medium thin.

The taste is slightly wheaty with notes of green hops and citrus. Alot of hops to be exact, and they impart a considerable bitterness in the finish.

Not what I expected in an American Pale Wheat, given the large dose for the style of german Saaz hops. I walked out the door of the establishment thinking, pilsner. Sure enough, I met one of the brewers later in the evening at a promotional tasting, and upon my asking about the hop content he also likened it to a pilsner. 4/3.5/3/4/3.5

August 2007, post-graduation keg I picked up from the brewery for myself, Pete, and Bo. Rode my bike from Chester to Maiden Lane to enjoy: I heard that the recipe was altered, and it shows. This is an excellent summer bier. Spicy, clean wheat aroma and flavor with a healthy dose of citric, grassy noble hops. Simple but extremely well crafted. Resembles a pilsner. Four or five (but primarily the three) of us put a huge dent in the 1/6 barrel...so yeah, very drinkable. Upping the scores. Had a fun ride home.

The beer arrived on the bar crystal clear pale straw with a large and frothy tall head which lasted nearly forever and coated the glass.

The aroma was fruity with a estery quality but not quite distinguishable as a particular fruit. The aroma had a citrusy quality and slight hop grassy nature.

The flavor was mostly comprised of bittering. That bittering and hop flavor was cascade based most likely and very citrusy with grapefruit. The beer was fiercely bitter for the style being created. No particular wheat presence due to the overbittered and hop flavor of the brew. Not well balanced and the bittering was almost harsh.

The finish was dry with lasting citrusy and grassy hop bittering long into the aftertaste. The body was medium.

Pint at Sawmill Tap Room (sorry, I passed the picket line for this one).

Summer Wheat from Carolina Brewing Company
Beer rating: 80 out of 100 with 16 ratings