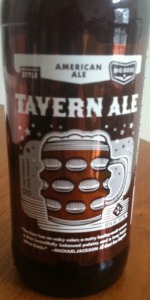 It's been awhile since I have had a Big Boss brew.Pours into a mug a deep bronze color with a half finger pretty quick to head atop.Caramel,juicy fruit, and light piney hops in the nose.Caramel and toast up front on the palate melding into a decent shot of earthy and piney hops in the finish,very well balanced.Not a hop bomb but a nice complete beer,big malty tones but with enough hops to satisfy the hop heads,and like others have said really easy to drink for the size.

An off-white fine foam reaches one-quarter inch and lingers leaving spotty lace on a Cisco fisheye pint glass. The beer is dirty copper (SRM 15-16) and hazy with some sediment and fine lazy carbonation.

The aroma is sweet and floral with light notes of pine and toasted malt. Warmth brings out caraway seeds.

The body is medium to full with a creamy texture and spritzy carbonation. Alcohol and astringency are light and as expected.

This is a really good drinking beer even though the ABV is too high for it to be sessionable. One could easily have a couple while watching a ball game or sitting poolside.

Has a really nice look and mouth feel. Definite caramel notes that linger on the tongue.
I got this as a growler at Highcraft in Apex so I guess that counts as a draft beer -it certainly left a good lacing on my glass
Has the right amount of bitterness for me

Pours a hazy light brown with low carbonation, almost as low as an English ale which is what this tastes like to me despite the description. Aroma is toffee, nutty, a little chocolate maybe? Taste is the same with some hops in the background and fruitiness either from the hops or maybe an English yeast. Very drinkable and enjoyable.

This drank like a light malty English bitter. I certainly wouldn't call it a pale ale. There are some bitter hops in the finish but this beer is malty.

I was surprised the abv was so high it certainly wasn't noticeable.

Very appealing looking session-able beer here. Deep warm 'light' mahogany tones. Nice creamy colored top as well, (not that large out of the growler but certainly isn't going anywhere immediately). Lacing is friendly and has nice stick to it also. Aroma is soft, sweet, crisp and unimposing. Tastes very fresh, lightly bitter with an even balance of malts to hops. I could definitely have many of these. This is very easy to drink and holds plenty enough flavor to keep me contained. The hops taste freshly green. Fruity grass, pine, leaves, and some ever so slight citrus.

This has always been one of my favorite Big boss brews, especially as fresh as it is. Its solid and happy. (The Edenton version was very enjoyable too).

Slightly hazed amber under a sturdy off-white head that never fully disappears. Nice lacing. The aroma is a touch of diacetyl, but is otherwise like sweet, toasty caramel malts and bread. Smooth, rich flavors are pretty well balanced, leaning towards the fruity flavors. Some citrus, grape, and tobacco linger after the malts. Smooth, medium body with little carbonation (which seems to suit this well).

Sort of an English/American hybrid. I could do a couple pints of this.

Pint on tap from Horniblow's tavern (how fitting) in Raleigh.

Pours an attractive, copper-orange body with a well-retained, albeit slender head. A piney, hop aroma with a sweet caramel backbone ensues. Notes of cherry and biscuity malts hit the nose as well.

Taste presents a great balance of hops and caramel malts with a touch of bubblegum flavor that Big Boss seems to brew into most of its beers. Hard to pin down, that note is. The mouthfeel is smooth, medium-bodied, with a crisp finish. Not much flavor on the aftertaste, however. Overall, though, this is a very tasty, intricate brew, and it's easy as hell to put down despite the 7% ABV. Bravo to Big Boss on a ballistic brew.

Poured an orange/amber with a decent head that quickly faded but left some decent lacing. The smell is richly malty and grainy with a note of hickory at the end. Taste is quite balanced, and there are some interesting flavors here. The beer is by turns nutty, malty, lightly bitter and fruity. I detect notes of apricot and cantaloupe. Quite good. Good solid body, but not grainy in the mouth. Somewhat unusual, but delicious and drinkable.

The beer was served a nice hazy orange with a great head that was lasting and left great lacing. The aroma was dominated by citrus hops. The taste was well balanced and very complex. The dry hops definitely add a lot to an already great beer. The Beer was very smooth and the alcohol was very well hidden. This was very enjoyable and I hope they choose to do it again for cask night.

taste: Delicate, smooth malts and a subtle(ish) hop flavor. Light to moderate bitterness in the finish. Good balance but nothing that stands out.

Followed this one up with a standard Horniblow's Tavern, and I definately like the cask better. The flavors just seem to be very well blended and balanced.

Tavern Ale from Big Boss Brewing
Beer rating: 87 out of 100 with 22 ratings