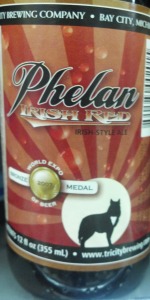 Pours a medium reddish/mahogany with medium head and persistent lacing.
Smell is sweet chocolate and a slight caramel.
Taste is sweet cocoa, a bit of dark fruit.
Like an earthy, chocolaty, cousin to scotch ale.

Clear dark red pour with a small white head. Aroma of dark fruit and caramel/toffee. Taste follows the nose with caramel and nut flavors upfront backed by dark fruit and a light bitterness.

I picked up a bottle of Tri-City's Phelan Irish Red last week for $1.69 at The Lager Mill. Tri-City's has been pretty hit or miss with me lately, but since this is one of the few beers I have yet to try from them I figured I would take a chance and give it a shot, so lets see how it goes. No visible bottling date, but I know it's fairly fresh. Poured from a brown 12oz bottle into a imperial pint glass.

A- The label is ok looking, it's not that eye catching, but it isn't poorly done and it says this beer took a bronze medal in 2007 at The WEB. It poured a deep and dark amber red color that had a half a fingers worth of white head that quickly faded to a thin ring that stayed till the end and left no lacing. The color was a little darker then normal, but still good looking, but the head was pretty weak, an average looking beer.

S- The first thing that I pick up are some lightly toasted caramel malts that have a high amount of medium sweetness and are quickly followed by a fruit aroma that is heavy on the dark fruits and when mixed with the malts it gives this beer an aroma similar to a black cherry. There was a little earthiness towards the end that is probably from the hops used in this beer. This beer doesn't smell like your typical Irish Red Ale, it's not true to style but I still liked it a little and it was quite different from most Irish Red Ales.

T- The flavor is quite different for an Irish Red Ale. It starts off with a sweet malty and grain flavor along with some caramel malts that are followed by a light amount of fruit that is mainly dark fruit. After that I get an unexpected toasty and roasty taste on the finish with sweetness replacing bitterness on the finish and a sweet toasted malt aftertaste. This beer isn't true to style but the flavor isn't that bad so I think it's pretty average.

M- Somewhat smooth, a little crisp, on the light side of being medium bodied, and it had a very high amount of carbonation that was a little prickly. The body wasn't half bad but the carbonation was out of control and messed with the flavor a little, it needs to be toned down quite a bit.

Overall I thought that this was an Ok beer that was not that true to style making this beer pretty different from most Irish Red's. It had ok drinkability, it went down ok, but the carbonation was a little too out of hand and the flavor isn't what I want in a good Irish Red Ale, one is more then enough for me. What I liked most about this beer was the aroma, it wasn't true to style but it was quite interesting and I didn't mind it. What I liked least about this beer was pretty much everything else, there was nothing that really impressed me about this beer, but I think I hated the carbonation the most. I wouldn't buy this beer again, it just isn't what a good Irish Red Ale should be like, so I wouldn't recommend this to anyone. I wasn't impressed with this beer, it seemed to go in the wrong direction and was unlike any Irish Red Ales I have had, it says Irish Red on the bottle so I know that is the style they were going for, I just don't understand how the brewer could taste this and think it is a worthy example of an Irish Red Ale, cause it's not and I have no clue how this beer to a bronze for it's style in 2007, there must have been only two other entry's. Lately I am getting much more misses then hits from this brewery which is pretty disappointing, you guys need to go back to the drawing board with this beer.

A: A reddish amber color. A little dark, but good. A nice lacing that stays with it.

T: At first there is a nutty flavor, followed by caramel. Finishes with some fruit flavors. Little to no hop flavor.

Overall: It's a red ale, worth trying but nothing special. Tri-City definitely has better beers to offer than this one.

A- Pours a deep, clear red liquid with some orange/brown highlights when held to a light. The off-white head is thin and splotchy.

S- Caramel, nuts, chocolate, and fruit. There is a bit of earthiness.

T- Earthy and sweet with some caramel and fruit aspects. Dark chocolate and nuts make their presence known as well. Almost has a scotch ale aspect to it.

M- Smooth with a light carbonation.

D- A bit rich for the ABV. Tasty, but not all that memorable.

Phelan Irish Red from Tri-City Brewing Company
Beer rating: 81 out of 100 with 17 ratings