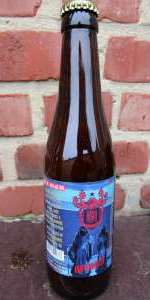 A kind of murky orange-light amber pour underneath a boisterous but quick lasting foamy white head.

There is toasted bread, barley malt, and a slight herbal note in the aroma but not the grassy character I expect from a PIlsener. Low hop profile.

The taste has a slight toasted bread character with a semi-sweetness I might expect from a pIlsener but just not cracker-like enough for my tastes. The finish lingers some and has a moderate bitterness.

Pours clear, gold in color with 1/2 inch head. Taste is pear, grass, and grain. Bitter, medium-light bodied, with moderate carbonation. Makes for a tasty, bitter, Belgian style lager. Would get this again.

Semi-dechiperable code on the top of the bottle seemed to suggest this was brewed in 2014. That the latest BA review was written 9 months ago does not augur well for this bottle's freshness. But, still, it pretty strong, and the folks at De Struise know a thing or two about making beers that can last. Let's see how it aged.

Smells like a straight-up old world pils, medium hoppy, perhaps leaning a bit more toward a Czech than a Municher, but impressively without a whit of its elevated ABV. Boozy pilseners rarely work (some are actively repulsive), so this is quite nice.

Tastes more Belgiany than it smells. Basically it's like a firm-but-delicate european pils up front, and then yeasty a Belgian pale in the back. Starts with grassy malt and sharp hops (I think they're Czech, but I can't be sure--after 3ish years, they certainly taste more Czech than Belgian or German). The ending is a more earthy malt combined with a spicy Belgian yeast, and the yeast lingers pleasantly on the finish, as if it were a good dubbel.

So, this beer is quite stylistically bold, but it manages to pull off what I assume the brewers intended for it.

Properly Belgian-looking, with a tall, long-lasting, rocky white head and a lightly hazed amber-gold body. The aroma is how one might hope/expect a super-pils to smell, which is to say quite malty with a potent fruity-spicy hop character that calls to mind green and pink peppercorns. In spite of its strength, it smells quite clean and fresh, without the lurching alcohol a lot of strong lagers have. The flavor is full-on with sweet (yet dry) malts, a flavor of biscuits and pearl barley. There's some mellow, spirited alcohol in the background as well as a little zap of slightly soapy hops to keep the sweetness in check. It finishes clean and dry and bitter with a medicinal edge. Not bad but to be honest not that different from a malt liquor in terms of the overall vibe, just classier and cleaner. Possible food pairings: Reuben and club sandwiches, Emmental, white chocolate, white miso, bacon.

Absolutely opaque golden orange brew, with a vigurous head. Smells like Belgian yeast and generally like a Belgian pale ale. Bitter pilsner-like taste, with a metallic taste and yeast all the way. Medium body and a bit high on carbonation, making this a bit tough to swallow. Decent, overall.