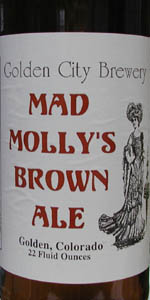 Mad Molly's Brown is a very, very dark English Brown Ale. Could be mistaken for opaque black when first poured. To light shows the hazy, thick garnet hue. Cloudy, thick looking. Decent light taupe head. Lacing looks to be quite intricate. Smell is at first a tinny blast of adjunct like aromas, not a good sign. bit of swirling brings out more of a fruity hop profile. A touch of roasty grains, but still with a distinct tinny aroma. On sipping, this beer has some real English qualities. Apples are dominant flavor, sweet. Lacking the warming, toasty, bready flavors I've come to love in American Brown Ales. Flavors are almost crisp. A touch of caramel flavor in the finish, all wrapped up in a noticeable hoppiness. Further drinking brings out some mild coffee notes, an almond-like nuttiness. Has an underlying flavor I can't identify that I don't care too much for.

Overall, a perfectly acceptable session English brown. Nothing extreme, nothing too awful about it. A bit bland for me. Probably my least favorite of GCB's brews, but there are plenty of other really good beers they make, so no loss.

This seems to be the flagship brew for Golden City, and it stays true to their habit of mainstreaming* the hell out of their products. This is a Brown Ale for people who like Bud-Light, which is actually excellent in its own special type of way. For example, say you have someone with you while you are at a craft brewery and you don't think that they will have a taste for anything that strays too far a field from mass market beer, well a Molly Brown would be perfect for that person. Its a great "starter" craft beer, but nothing if not average.

* When I say mainstreamed, what I mean is that the beer stays true to its original style, but that it is pulled towards a more homogenized, more suburban, more "blah" elements of that style. Its not experimental, not memorable, just very, very safe. Which isn't bad in and of itself, but if you want to get great scores from people like me, you need to push the limits, not stay within the confines of what you know works.

22 oz bottle was poured into a pint glass.

Appearance: The beer poured a slight head that has reduced to a thin layer. Spotty lacing is left on the glass while drinking. An hazy amber orange color with slight signs of carbonation.

Taste: slight chocolate, bready malts, and some nuttiness and fruitiness. Slight bitterness at the end also.

Overall: Not a bad brew at all. I was expecting more body and flavor from this beer, but definitely could be enjoyed in the warmer months. Will be hitting up the brewery again next time we head to Denver.

(LARGE EDIT: I normally don't re-review beers, but apparently the bottle of this I bought was really, really old. I had some of this fresh in Golden and the major issues I had with sourness were really no longer really even there. Instead of sourness there's a mild nuttiness. There's still a fair amount of fruit character, but it belongs there. Still not my favorite beer in the world, but it's much better than I thought)

This is apparently an English Dark Mild, but like many others, is given a more familiar title like "brown."
Pours a nondescript brown color with a pretty nice white cap of foam on the top with little effort.
Smells both sweet and sour...unusual. I get nuttiness, but also a sour apple note and a bit of a wild yeast nose, too.
The flavor carries that same character over. Nutty initially, but then it gives way to that slightly sour more fruity character.
Not sure I like it or not, but it is insanely drinkable.
Definitely different, I can see myself potentially craving this as a quencher or pairing with a light meal.
I drank the 22oz myself and still had room for more.

Pours a nice medium brown, shot through with gorgeous streaks of red. Smells like dessert, with heavy notes of chocolate blended with canned pears. The chocolate is repeated on the palate, although it is noticeably lighter. This one finishes very dry.

Well, I"m not a brown ale fan, but Jeff "forced" me to have this one at his quite wonderful tasting the other day. I'm glad he did.

A solid, yet not overpowering chocolate aroma, with sweet caramel and a hint of grapefruit. I'm glad to smell the GF...means it has some hops in it. I expected some soft dryness to it.

The taste is great. The hops bring out the chocolate-bite, kinda sharp, yet the sweetness is still there. Robust and calm. This is a good flavored beer, with limited sweetness and sharp, quick bite at the end along with a touch of molasses.

Was is Molly so mad? Pours a chestnut brown color with a slight haze. A good pour left a good sized off white head. Good retention and lacing but both faded over time and did not last through the tasting.

The nose is very light. What little I can pick up is good. Some caramel and chocolate notes from the malt. A almost lactose aroma brings our more of a milk chocolate aroma. Some minor esters and nutty notes. No real hop or yeast notes.

The taste is comes out nicely with some taste. A good malt backing with a nice caramel/chocolate mix with a slight nutty flavor in the back end. Some DMS but not overwhelming. A more English variety, Fuggles my guess. Has a soft earthy characteristic, with a light floral taste in the back end. Some fruity esters but light overall. Some minor yeast notes but good.

The body is moderate to light moderate. Good feel, but could use a bit more depth/body. A light carbonation. Some good taste notes here but next to no aroma is a bit offsetting.

Thanks to Jeff for the samples.

a: Purple hues in a brown body. Thin white head.

m: body is light, a touch watery. smooth and quaffable.

d: easy to drink. Sort of plain, but a very approachable and unoffensive brew.

Smell: I get a great aroma of toffee, honey and earthy hops.

Taste: The is beer is all about the malt. Very nicely done with rich roasty notes. Slightly dry with a residual sweetness. Hops are note very pronounced but the beer is fairly balanced.

Drinkability: Good. I found this to be a great beer, dry enough for a session beer sweet enough to keep me interested.

22oz bottle from Mentor as part of BIF 33/The Race - Team Sinister. Wish I had cracked it sooner instead of sitting on this bottle unintentionally. It was dropped behind my case of Triticus.

Pours a dark and murky brown in color with just a hint of red to the hue. Big frappe-like head that eventually disappeared to a thinner film. Nose is slightly sweet with a nice grainy presence.

Flavor is a slight shade mroe bitter than other samples of the style. But just a shade more bitter from the hops. Malty backbone behind it all gives it a nice sweet presence. Nice example of the style. Medium body that is not cloying which is what I was afraid of on this steamy evening.

22oz bottle from Mentor as part of BIF 33/The Race - Team Spring. Thanks for the opportunity. Label notes its style as English Mild, fwiw.

Poured into an imperial pint glass, formed a minimal 1/8" beige head above the clear brown brew. Head is gone in a flash, leaving just a few bubbles around the rim, with average to good lacing. Aroma is lightly of grain husks. Taste is also malty upfront, with light hoppiness. Mouthfeel and drinkability have potential, but are limited in this case by the severe lack of carbonation in my bottle. Not sure if its intended to be such, but that's the way it is here.

Bomber obtained from the brewery and consumed later that same evening. Pours a one-finger caramel light brown head over a slightly cloudy brown liquid. Some red character in the color. Smells of dry chocolate and some nut. Fuggles hops and a cream lactose smoothness. Tastes nutty, chocolate and fuggles. Smooth wet sweet with low hop bitterness. This is spot on as a brown ale. Simple and pleasing. A little bit of caramel undertone. Grassy hop late and extending into the aftertaste. Well done example of the style. Md body and moderate carbonation.

The beer pours a brown color with a thin offwhite head that fades to lacing. The aroma is decent. It has a grainy pale, crystal, and victory malt scent. It is mildly malty with a nutty aroma. The taste is decent as well. It has the typical "brown" ale flavor; pale and crystal malts. It also has a nutty taste as well as a bitter hop finish. The mouthfeel is good. It is a medium bodied beer with adequate carbonation. This is a decent brown ale. It has some good qualities, but it's just above the average.