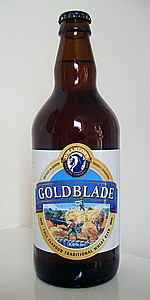 Notes:
View: Beers
Reviews: 6 | Log in to view all ratings and sort

Pours a cloudy golden amber with a small white head. Aroma and taste of sweet banana mild fruity notes upfront mellows out to wheat, biscuit malt, yeast as it warms up with some moderate amount of mild peppery hops for balance. A light to medium body, with soft carbonation. The flavor became more prevalent as it warmed up. Overall not the best wheat ale but still goes down quite easy, a good brew.

Bottle at Chaucer's in London, Ontario. The pour is cloudy yellow, with a good amount of floaties Nice foamy white cap as well. It reminds me of American Hops. Lots of citric piney aromas, with a subtle wheaty/yeasty flavour profile, alongside lemon and grass. Sweet fruity flavours (orange, lemon)are complimented by the wheat and bready yeast flavours. Very effervescent, bitter piney hops. Like a Three Floyds version of a wheat. Very enjoyable. Finishes tangy, crisp, and bubbly. Very good.

Bottle: Poured a lightly hazy yellow color ale with an average foamy head with light retention and some minimal lacing. Aroma of light malt with not much apparent wheat with some strange metallic hops. Taste is also a mix between some lightly sweet malt with some metallic hops and a spicy yeast finish. Body is a bit thin with some average carbonation.

Coming in a 500ml brown glass bottle, bottle-conditioned. I believe this is the re-branded O'Hanlon's "Wheat Beer", as the beer label says this ale also won a double Champion British Wheat Beer in 1999 and 2002, when O'Hanlon's only had "Wheat Beer" rather than this Goldblade in its range, whereas now Wheat Beer is no more, replaced by this "Goldblade" in the market. The ingredients include Pale malt, Wheat malt, and Caramalt, on top of Challenger, Cascade and First Gold hop varieties. BB 15/11/08, served cool in a straight imperial pint glass.

A: choosing to serve the beer clear (not cloudy), there comes a dark golden hue, with very good clarity for a RAIB, topped with a creamy off-white froth which is supported by moderate and ever-lasting streams of fine carbonation. Looking very very nice indeed.
S: sweet pale malts are balanced by fragrant lemony-citric and zesty hop fruitiness with a lightly dusty hint, on top of a solid layer of exotic fruit esters (e.g. overripe mangos) not unlike a estery Belgian pale ale... a lightly mineral, faintly stinky-leathery and even spicy touch of something (the typical clove-ish yeastiness?) stays in the background, ringing a bell of some light-bodied wheat ale I've tried. Overall, hoppy, fruity, delicious, and not like any other wheat beer produced in either German or Belgian/Dutch (or "American wheat-ale") fashion.
T: the immediately bitter, salty-sweet, leather-ish & mineral, and bitter-pollen foretaste mixed of wheat malts, pale malts, and citric-zesty hops gradually gives way to a more chewy, and slightly spicy, finish of bitterness and yeastiness. Deep down the palate, it's increasingly zesty-bitter but always with an edge of spiciness thanks to the yeast-sediments and also grainy touch of pale malts. Satisfying as well as more-ish in the finish, true to the tradition of an English Bitter.
M&D: the very healthy input of light fizziness helps retain a refreshing palate throughout the drink, while the overwhelming hop presence vis-à-vis maltiness ensures a more-ish feel on the balance. I can't remember much from my last bottle of the same beer under the previous brand, but this bottle proves a deserved winner of so many awards!

Poured into a Franziskaner Weisssbier glass.

Huge white head, even though I poured it as slow and careful as I could (didn't wet the glass), not all the beer got into the glass during the pour. The body was pale golden yellow, clear on the first pour with loads of bubbles rising up through the body and at speed. The beer had a slight mistiness in the second pour, not as crystal clear, the aroma and taste didn't alter.

The aroma was of grapefruit and lemons, citrus notes anyway, but not overly strong or powerful.

The taste is bitter hops and some malts, maybe citrus fruits too, lemons again like the smell.

The mouthfeel is dry and the lemon flavours come through stronger during the aftertaste.

A summer drink for sure, I'll have another but on a sunny day.

Other comments: This isn't actually an "American Pale Wheat Ale". They're calling it a British Wheat Beer, but there wasn't any category like that in the BA list. Oh well. This is a perfect summer beer. Would really like to try it on cask.

Goldblade from Hanlons Brewery
Beer rating: 3.65 out of 5 with 6 ratings