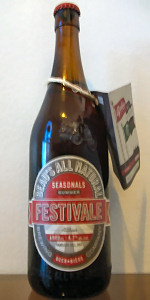 Notes: Festivale is an amber ale, with balanced high-intensity maltiness and hop presence. Caramunich malts give Festivale its colour and a rich caramel sweetness. Festivale bucks the trend of pale summer beers, offering up amber hues and tastiness for a unique result that is both quaffable and refreshing.

Reviewed by EricVonStein from Canada (ON)

Sweet caramel malts dominate the nose, a bit burnt even, a bit bready in the background with roasty toasty notes hanging around but quite faint. Scents cut off after that and malts dont linger too long, not a tonne of depth in the nose.

Taste follows the caramel malts, toasty whole grain bread. Earthy hops roll in and bring a bitterness that gets more substantial as I work my way through the glass, a bit too substantial eventually. Finish is bitter with lingering burnt caramel aftertaste.

Decent body on this one and comes off creamy and smooth. Overall nice malt balance and quite rich flavours, including the earthy hops, though the bitterness on the back end throws the balance off some. Still, nice mouthful of malt and handsome flavours are here. Solid all around if off kilter a bit.

Reviewed by Tilly from Kentucky

O:
Very good well-balanced Alt.
This is an easy-drinking, not too boozy beer to sip on a nice summer evening. It looks and feels nice and both the aroma and flavor are packed full of layers of malt flavor without being jumbled or in-your-face. Well-made German style (something that seems few and far between sometimes). In general I feel like the caramel, toasted, molasses flavors are the most predominate, but there is also a decent dose of medicinal/spicy hops that sit in the background but round it all out quite nice; in addition there is a slight tea-like/hard water feel to it that is not distracting, but I don't know that it necessarily adds to it either.
All-in-all this is a good, well-made beer that I would certainly have again; worth a shot if you see it. (4)

Reviewed by Danomeister from Canada (BC)

Reviewed by ZorPrime from Canada (QC)

3.65/5  rDev -0.5%
Its been a long time I wanted to try this one. Finally got my hands on one. Clear beer. Effervescent too. Amber color. Nice creamy head thrones on top of it. Malty and some burnt caramel in the nose. Tastewise, the beer is more roasted malts than anything else. Very refreshing. Effervescent too but still sweet in the mouth. Light body to medium. Refreshing and delicious. A good summer beer with lots of taste! Cheers!
Sep 14, 2014
Rated: 3.76 by BushwyckCraft from New York

Taste - Very similar to the aromas but the flavours are more pronounced. You get a moderate bitterness from the noble hops. Fruity esters and touch of pepper chime in as well. Finishes with the caramel/biscuity malts.

Mouthfeel - Medium bodied with light to moderate carbonation. A pleasant stickiness to the body.

Overall - An altbier that hits all the marks of the style. Although the aroma lacked compared to the taste, this brew is still an enjoyable one.

M- Ok at best. Nothing special

O- Pretty good. Good for the price. Raise it a buck and I won't buy again. Not complex at all. Very simple recipe producing simple results.

Appearance - Clear copper color, a few effervescent bubbles. Dense off-white head. Some lacing sticks to the interior of the glass.

Smell - Bready, metallic blend with earthy notes too. Some mild floral aromas, but I can sense that this beer will be bitter by the nose even.

Overall - Too much bitterness for my liking without any counterbalance. Decent enough, but I liked others of the style a little better.

Pours a clear, dark amber colour, topped with nearly two fingers of frothy, sparkling white head. Great retention, and lots of lacing; as attractive an amber ale as I've ever seen. The aroma is relatively subdued, but nonetheless quite clean and enjoyable - bready malts, caramel, toasted nuts and grass stick out, resulting in an enjoyable traditional bouquet.

A very tasty little ale - biscuity malts and caramel start things off, with a slightly nutty vibe to complement. The second half of the profile showcases the hops beautifully - quite grassy and earthy, with a lingering bitterness that begs for another sip. On the lighter side of medium-bodied, with moderate carbonation appropriate for the style. I could drink this all night.

Final Grade: 4.04, an impressive A-. Beau's Festivale is a fine session amber, offering an interesting harmony between the sweet, biscuity sweet malts and its grassy noble hop bill. This is probably one of my favourite offerings from this brewery - this is the second bottle I've purchased, and I could certainly see myself picking up a few more before it's out of season. Highly recommended to any fan of balanced, quaffable amber ales.