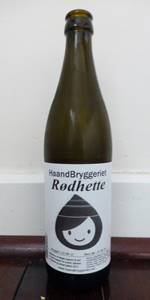 Thanks to [email protected] Liquor for this generous extra.

Pours a powerful crimson, evoking the blood of one's slain enemy. White fluffy head and well-retaining lacing. Looks like a pretty beautiful kriek to me.

Nose gives Brett, and also that specific Brett strain that gives a pineapple character. Lots o' pineapple. There's also a creamy, almost confectionery character to it. Now I'm getting some sour cherry, but it's as though it was dusted with some icing sugar. Pretty Kriek-y on the whole. Reserved cherries and cheese. Note: there's a subtle cheese character which grows with time, almost closer to non-blue cheese than most other sours/lambics I've had, almost like brie, or a creamier rather than blue cheese although it still has a blue cheese character to it.

Taste is not sour, at all. You think that's exactly the direction it's heading with the appearance, nose and when it initially hits your tastebuds with a fizzle, but it doesn't go to the sourness. It becomes bitter. The bitterness predominantly mitigates the sourness. What is this wizardry- rye malt, hops, or something else?

Mouthfeel is a mildly sour, slightly rye-y sort of mineral-y thing. I really like this minerality of this-it's unique and quite drinkable. It's almost got the bitterness of anise or something. Real cleansing bitterness in the finish, as though you never had beer on your tongue.

Pretty unique beer and very much worth trying for how it confounds expectations.

Drank from my Ciney Sniffer.

A - Pours a pinky red cloudy colour. with a pink head that retains well.

S - Strong aroma that is tart and sour.

T - Same on the taste with cherries. The sourness and acidity seem to be very well balanced with the fruit.

Rødhette from HaandBryggeriet
Beer rating: 4.15 out of 5 with 2 ratings