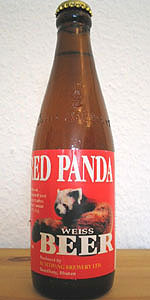 Notes:
View: Beers
Reviews: 5 | Ratings: 7 | Log in to view all ratings and sort

A: it appears as a hefe weizen in my glass[coca cola]

S: some grain nothing else

T: watery with some grain and a rice sweetness in it

M: drink cool it has something of a hefe weizen
drink warm its just some beer thats cloudy.

O: i bought it in bhumtang province near jakar it was made by a Swiss cheesemaker?? but than it had a nice ring to it on holiday overlooking the hymalays and fun to drink a white beer in Bhutan. i drunk it in 2005 so maybe its becoming better my tastenotes where this.

I recieved this from a friend that came back from an Asian trip. Poured into a Hefe glass. Pale straw in color, cloudy, with a nice white tight head. The aroma is of banana and cloves, true to the style. The taste is what grapped me. Absolutely sour and tart from start to finish. Being that they use an open/wild fermentation process it should be expected and welcomed. A suprising brew that I am sure glad I was able to try. There are better German weisses and much better Belgian Guezes on the market, IMO, nontheless this is from a small brewery in a remote part of the world.

I lived in Bhutan the summer of 2007 and was fortunate enough to have drank a ton of these. Luckily, I was also the first guy to try it on draft in Thimphu at Benez.

I feel that the other two reviewers must not have had the same experience with Red Panda that I had (or I was hurting so bad for a decent beer while I was there that this seemed great). My memory is hazy as to the specifics but I remember a yeasty, spice driven weiss beer that was very refreshing and unique. It pairs well with the spicy foods that are the norm in Bhutan and I recommend trying the only beer actually brewed in the country!

Pours a hazy straw yellow body capped by a frothy off-white head. The aroma is predominately banana and clove and with a hint of lemon. Flavor is a bit on the yeasty side even for a hefeweizen, but tasty and respectably complex nonetheless. Banana also appears in the flavor, accompanied by a mild tartness and stronger lemon flavor. Mouthfeel is medium to full with mild carbonation.

A Himalayan jewel of a beer. While it ranks as a fairly average Hefeweizen by western standards, this is possibly one of the best Asian beers I've had (admittedly the competition is not very stiff). Still this beer was a pleasant surprise among many in Bhutan. It is widely available in bottles along the tourist circuit, and word has it available on tap at select watering holes in Bumthang.

My parents brought me a bottle of this stuff after a trip to Bhutan. One of their day trips included stop by the "brewery," which I think is in the same building as a local cheese maker. My parents said the breweries equipment was rather small and that the brewer was likely making 50-100 gallon batches. The bottle was curious; although it had a "Red Panda" label on it, the glass bottle itself was from the Carlsberg brewery. Apparently they truly recycle in Bhutan and get glass bottles from wherever they can.

There was a huge yeast cake on the bottom of the bottle. The beer poured a cloudy pale yellow/white, almost like a witbier. The head was rocky and white.

The aroma of the beer was of grains and some cooked corn. Possibly DMS...

The flavor of the beer was very bland. It had a cerial grain flavor to it with a very light floral hoppiness.

The mouthfeel was light, but not watery. The carbonation seemed good.

This wasn't the most drinkable beer out there, but it wasn't horrible either. It reminded me of a beginner homebrewer's attempt at a weissbier from an extract kit. At least it's a departure from the typical "continental pilsner" that you get in many countries abroad.

Red Panda from Bumthang Brewery, Ltd.
Beer rating: 3.22 out of 5 with 7 ratings