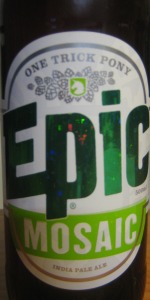 Notes: So much beer with so little flavour. Contemplating the blue pill? Wait! A new pony with a kick-ass facial horn. Power to neutralize the poison from the faceless industrial brewing complex. No more green bottles, just green hops. No virgins needed to tame this. May contain traces of Alicorn.
View: Beers
Reviews: 4 | Ratings: 11 | Log in to view all ratings and sort

A: Super clear, must be filtered. No yeast in bottom of bottle. Nice small fluffy white head with awesome lacing.

S: A bit of pine and a bit of citrus. Lemon/Hay?

T: Super clean. A bit of pine and citrus. Would love to have a little more flavour.

O: Nice beer but not spectacular.

Another new hop I'm trying for the first time and have not heard heaps about it anyway it pours the lightest amber hue with a sudsy two finger head and nice tight lacing around the rim,the smell is definitely different it's a combination of lemon sherbet,cough medicine,toffee malts are predominant aswell as a weird toffee apple/candied fruit hint in the background,mouthfeel is just under medium bodied and very carbonated maybe a tad too much and the taste is really really different to any other hop I've tasted it starts off with sweet guava,toffee apple,lemon sherbet,boiled candy,caramel and finished with a bittersweet medicinal hit of apple and guava and to be honest as far as hops go this one def leaves me gobsmacked still trying to explain the aroma and taste and even though this is just an average AIPA I want to try more of this hop in different brews cheers.

Smell is hoppiness but also a decent amount of malt. The hoppiness reminds me of previous reviews of this beer- Sorachi Ace-like. Lemon, lemon sherbet, even dishwasher-liquid.

As the beer warms, I also get toffee apple. Some guava.

Taste is overwhelmingly lemon/dishwasher-y. Not in a particularly bad way, but definitely in a one-note way. Quite buttery in the hop/malt combination.

Mouthfeel is more about the malt. Some guava.

Not a bad beer but there's too much malt flavour for a relatively fresh American IPA, and the hop itself alone is not all that satisfying. I expect a bit more from Epic and Armageddon blows this out of the water. Not sure how enthused I am for the continuance of this single hop series.

Epic Mosaic from Epic Brewing Company
Beer rating: 86 out of 100 with 11 ratings