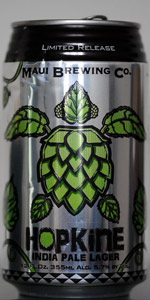 A: The beer is a light gold color, with a short off-white head that fades slowly and leaves a thick lace on the glass.

T: The taste starts out sweet with flavors of citrus and caramel. Then a strong but not over-powering hops bitterness comes in. The malt character is hearty but not too heavy and brings a good balance. The after-taste is slightly hoppy and slightly sweet.

O: Tasty, goes down easily, not too filling, decent kick, good representation of style, this is a solid hoppy lager to drink for a while.

I had this the other day. Found it at Total Wine in Roseville, CA.
A- clear yellowish color, thick foamy head
S- grassy hops mostly
T- mostly grassy hops, some pine
M- light bodied
D- pretty good, I would definitely buy it again.

Opaque, pale gold with a thick, soapy, white head that leaves lots of lacing. Has a tropical look about it.

Nose is abundant floral, orange, melon and passion fruit with a piney backbone to give it balance.

Resinous hops come to the fore when tasting. Followed by lemon and honeysuckle.

I like this very much. Plenty of west coast hops balanced by pilsner malts. The oily, spicy hops are complemented by the clean malt profile without being subdued. It provides above-average drinkability in a hop-forward beer.

Canned on 2/10/16. 12oz can poured into a tulip. Pours a hazy burnt yellow with a fluffy eggshell white head that slowly falls leaving great thick retention and nice lacing. The aromas have lots of citrus notes. Lots of orange. Some caramel and cracker malts in the mix. The flavors are malty with a hop bite. Solid bitterness, but the malts balance it out. Very solid malt backbone. More orange with hints of lemon and grapefruit. The lager characteristics seem to get lost in everything. Alcohol goes completely unnoticed. Mouthfeel is light with moderate carbonation. Very creamy, fluffy and smooth.

This is a solid IPL despite hitting Ohio with over 5 months on it. I bet it would be even better when fresher. It's ultimately refreshing and enjoyable.

Pours a clear golden color with white head. Smells like an IPA, citrus, pine, and some grass on the nose; follows onto the palate. Medium bodied. Finishes much like a lager, lingering flavors of citrus and floral tones.

Lasting and decent bar poured head. Clumps of spotty lace. The liquid is golden with a decent chill haze.

For the smell, I get cream, floral hop and berry sweetness.

This beer is subtly sweet with a smooth cut off bitter (white pepper) hop. This balances well. Above average body with an elevated carbonation level. Aftertaste is modestly bitter.

Bought 6-pack from Foodland $8.88
Floral smell
Light Mouthfeel
Medium carbonation
Not a strong hops taste as most IPAs. Has a taste that hints of being an IPA, clean taste of a lager.
Overall an interesting cross between a lager and an IPA. Probably would not buy again as they make other beers that are much better.

-bright yellow pour from can with fine carbonation. Light hop aroma, bits of pine and citrus, malty notes. Hop flavors are consistent at front and back; the body is really solid, an easy sipper.

Pours a pale hazy yellow with 1 finger head. Smells juicy, pine, and pineapple. Tastes fairly bitter on first half of sip, finishes even more bitter and spicy. Solid drinkability for such an aromatic nose. Would buy again if going for amped up hop flavor.

Reminds me very much of Jack's Abby Weed Beer... whatever the hell the name was... It was one of the Hopstitutions (#6 potentially) that tasted pretty much exactly like biting in to the freshest, dankest nug you could think of. Anyway...

L: I enjoy drinking canned beers out of the can (otherwise why else would they be in there -- heady topper logic), however I poured a bit out to see what its insides beheld. Straw color, lots of carbonation, very white head. The artwork on the can is too dope, mainly the reason I got it honestly. A friggin hop turtle!!! Gotta love hop animals -- I'm looking at you Night Shift ;)

T: Much of the same. Definitely a solid piney bitterness upfront that diminishes quickly and cleanly as it should in an IPL. Some lemon, grapefruit and orange notes on the end leave a fulfilling flavor behind.

Overall very glad I purchased this beer. I haven't seen it selling too frequently at my work but now I'm able to let people in on what their missing -- a very solid substitution for any hop head's favorite IPA. If you see it get it, don't miss out on this limited release!

Poured a clear golden body with large head that slowly receded and left lace patches. Aroma has citric, piney, oil hops dominating the smell of the beer. Smooth body, large taste of hops with citric, dirt, earth, dominating taste profile but there are bits of sweetness in background and this is an easy to drink, hop forward beer with clean finish and worth trying.

On draft, in pint glass

Poured on draft into an Irish pint glass.

A: Pours a slightly hazy straw/pale gold with a nice head that maintains well.

T: A well-balanced beer that is slightly hop-forward. The Northwest hop varietals settle cleanly and pleasantly on the back end.

O: A zesty and refreshing brew, great for all sorts of warm and hot weather drinking. It's straightforward and excels in its simplicity. Well done!

Pours a murky golden-orange with a foamy off-white head that settles to a partial film on top of the beer. Foamy patches of lace form around the glass on the drink down. Smell is of citrus zest, grapefruit juice, pine needle, and earth aromas. Taste is much the same with cracker, citrus zest, grapefruit juice, melon, pine needle, and earth flavors on the finish. There is a mild amount of bitterness on the palate with each sip. This beer has a lower level of carbonation with a slightly crisp mouthfeel. Overall, this is a pretty good beer with solid hop flavors, but the smell on this one is slightly better to me.

L - Golden sunkissed in color with a semi-hazy transparency. Big head that leaves great amount of lacing behind and reduces to a 1/4" throughout.

12oz can, sample from the brewery.

On tap at GBD in Washington, D.C.

Pours quite dark for a lager, amber bordering on brown. Nose and flavor are piney, resinous hops. I'm not sure what the lager yeast adds compared to ale, as this just tastes like a solid IPA. It is good though, and as far as floral hop-forward beers, this stands up.